Democrats are the real spoilers, not us, says Green party nominee Howie Hawkins 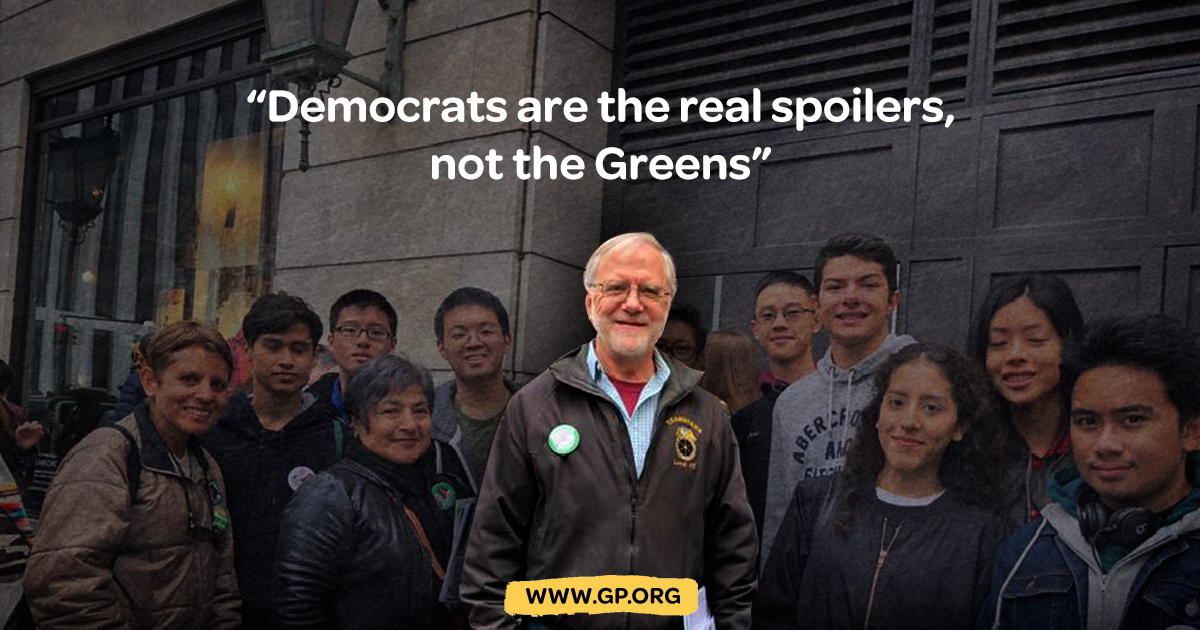 In an exclusive conversation with The Times of India, The Green Party presidential nominee Howie Hawkins tells us why Democrats are the spoilers, his concerns about the present election process and his take on why Bernie Sanders is now supporting Joe Biden.

Why do you think Americans should vote for you?

I say vote for what you support. A lot of people in the Democrat primary supported Bernie Sanders because they want Medicare for all, they want a full-strength green new deal. They want student and medical debt relief. Joe Biden is not for those things. We are. So if they're for those things, they should vote for us. If they vote for Joe Biden, they get lost in the sauce. Nobody knows they are for Medicare for all or a full-strength green new deal (as) they voted for Joe Biden. You vote for the Green Party, your voice is heard and you make the politicians come to you. So that's where your power is — to vote for what you want.

So basically a big part of your campaign is trying to bring along the Bernie Sanders supporters to your side. Is that a fair assessment?

That is one bucket of votes we want. The biggest bucket is the hundred million people that did not vote in the 2016 presidential election.These are disproportionately working class people, people of color, and young people. And they're disgusted with the two parties. They feel they don't get represented by them and we have a message for those people that we'll give them the things that they need from the political system. So that's the biggest group of voters we're going for. The ones that haven't been voting.

On the things that you have spoken about, the economic rights bill, the bill for employment, do you think America is ready for this? Is America really interested in all this?

Absolutely. We've had polling, public opinion polling for National health insurance, what we call Medicare for all, going back to the Truman administration. The majority of people have always been for it. Same thing with the right to a job for everybody willing and able to work. Those are majoritarian positions.

The reason Bernie Sanders did so well was that he finally gave voice to the Medicare for all that so many people want. So yeah, America's ready for that. People don't vote for -isms. They vote for real solutions, practical things Americans are known to be pragmatic and we have a work ethic.

I think the American people are way to the left of the politicians and both parties on the economic issues for sure. So yeah, I think America is ready for these things. We’ve got public opinion polling to show it.

Why do you think there is a need for a party like yours, The Green Party? Why can't these issues be resolved by the Democrats or the Republicans?

Well, they're bought and paid for by the wealthy interests, the big corporations. So the economic policies we get benefit the wealthy class, not the working class. So that's why you know public opinion doesn't translate into public policy in this country and that's the fundamental problem of American politics.

If the two biggest parties of the country, as you say, are bought by the wealthy establishment, how is your party protected from it?

We do not accept money from for-profit entities, whether it's a business or a trade association. We only take money from regular folks. So lots of little people giving a little bit is how we're gonna compete with the big money.

How do you assess the US govt's response to the coronavirus crisis so far? What you, or the Green Party, would have done differently?

The response to the coronavirus crisis shows that the two governing parties in this country are presiding over a failed state. They should have a test, trace and quarantine program and we don't (have one). Most countries in the world do. Trump has given up. He's a loser, but where is Joe Biden? He could convene a socially distanced news conference and start pounding away. And while he's at it, he could say we need a universal mail-in ballot option so that everybody has an opportunity to vote in the election in November in the midst of the pandemic.

Why do you think he's not hogging the limelight or isn't coming out in the media as much during this crisis?

He's known for gaffes, getting off-script. I think they're just keeping him hidden because Trump is destroying himself.

How do you respond to the accusations that the third party in the US, when most likely it does not have a chance of winning the electoral college, is actually a spoiler?

The Democratic party and Joe Biden are the spoilers. We've been giving them the solution to the spoiler problem since Ralph Nader ran in 2000. And that is, get rid of the electoral college and have a rank-choice national popular vote for president.

You want this electoral college system to be removed?

Yeah remove it and have a national popular vote and do it by rank choice voting where you rank your choices one, two three. And if nobody gets a majority in the first round, the last-place candidate is eliminated and their vote is transferred to their second choice. That way, you can vote for the candidate you like the most, without worrying about it helping the candidate you like the least. And that solution is there and instead, Democrats spend their time trying to keep the Green Party off the ballot.

Is the ballot system the only reason for third parties not being able to make it big in the US political system?

That's a major part. And the political culture of the two-party system, which is drilled into people. They look at the mainstream media and it's a two-way race even though there are other candidates. We're just not in the narrative of the coverage. So people don't then take us seriously because if you're not on the media, you don't exist for a lot of people. That's our biggest obstacle. It's bigger than ballot access. It's bigger than you know trying to raise enough money.

I wanted to get your insight on the institutional racism that is a big talking point right now in America because of the George Floyd (https://timesofindia.indiatimes.com/topic/George-Floyd) incident. What would have been your response compared to Trump?

Well, I wouldn't call out the military to suppress the demonstrations for sure. Biden's response was tone-deaf. The first thing he said, he went into a black church and said, officers should shoot people in the leg rather than the heart. And when the ‘defund the police’ demand came up, he said I am not for that. We support 'defund the police' but what that means is a lot of the police budget should go to social services. For example, only about five percent of what they (police) do concerns violent crimes and about thirteen percent concerns felony, property crimes. Over 80% is dealing with low-level offenses or even non-criminal behavior: traffic violations, homeless people,they get charged with vagrancy. We should find them (homeless people) a home. Drug addicts, they get charged and sent to prison when they need medical treatment. People in the mental health crisis need psychologists, not an officer with the gun, which often leaves a tragic result.

We can't wait for you know, white people with racist attitudes to reform themselves. We’ve got to empower the racially oppressed communities so they have control of their own resources and there aren't racists as gatekeepers. Real estate agents keeping them out of communities, employers not hiring them. A key thing there is community control of the police. Right now, the police police themselves and that's how they get away with murder and other crimes.

You have contested in over 20 elections so far in your life. You haven't won any of them so far. What keeps you going?

I've been a social movement activist my whole life going back to the 1960s. During the Vietnam war movement, in 1965, 66, 67, we were a vilified minority, and then things changed in 68 and I've had the same experience with anti-nuclear power movement, the anti-apartheid movement and right down to a getting a ban on fracking in New York state.

Let's talk about Bernie Sanders now. The direction in which he moved the national conversation, how big an achievement is that?

Not being able to change the policy, would you say then that is his biggest failure?

Yeah, and I think there's a lesson to be learned from Bernie Sanders. When he ran as an independent, he was elected to the mayor Burlington, Vermont. And then to Congress and then to the US Senate as an independent. When he tried to run as a Democrat, he lost. So he showed we can win independent of the two-party system.

Now he has come in support of Joe Biden, a person who he was strictly opposing just a few months ago. Why has he done so?

Well he's got four more years in his Senate term and he's in good health. Maybe he's thinking about another six years beyond that. So, he wants to be a player with the Democrat caucus in the Senate. With a Democrat president you know he's probably thinking ‘I can move Medicare for all in the Senate’. That is my best guess as to what his calculation is. I think he still sees himself as somebody that can influence legislation and that's a give and take process. So that's my best guess as to what's going on in his mind.