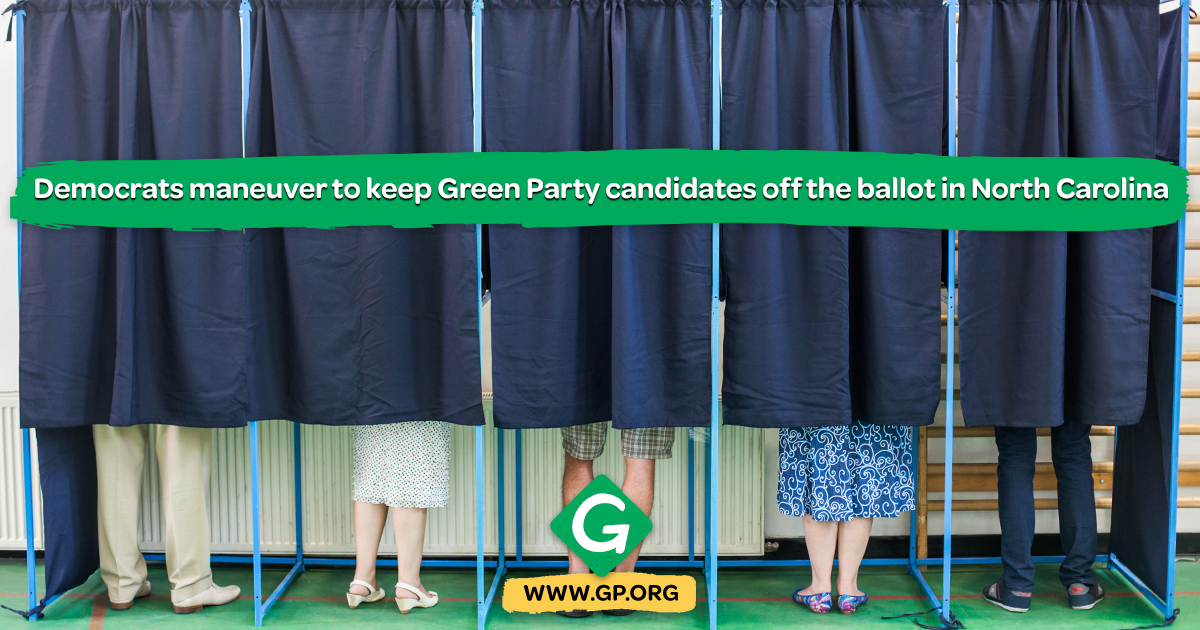 Democratic Party activists fretting about potential Republican strength in North Carolina, a state considered to be leaning red for the midterm elections, are mounting an aggressive campaign to keep the left-leaning Green Party off the ballot there to avoid diluting Democratic turnout.

Green Party activists claim Democrats from the national party apparatus are spearheading a number of challenges to the legitimacy of Green Party petitions and trying to get people who signed those petitions to remove their signatures after the fact.

In letters to the North Carolina Board of Elections, the Elias Group — a Washington law firm with deep ties to the national Democratic Party — and a North Carolina Democrat, Michael Abucewicz, claim that "not only did the Green Party fail to 'inform the signers of the general purpose and intent of the new party,'" but also that it "intentionally instructed circulators to conceal its platform."

North Carolinians who signed petitions for the Green Party have also been receiving "calls, text messages and in-person visits to their homes by people aggressively attempting to compel them to remove their signature," according to a letter sent to the Board of Elections by an investigator working for the Green Party.

A Green Party senatorial candidate in the state, Matthew Hoh, said on Twitter that he received a text from the Democratic Senatorial Campaign Committee urging him to ask the Board of Elections to remove his name from the petition.

"If the Green Party is on the ballot it will give Republicans a huge advantage that will help them win in North Carolina in 2022 and 2024," the message read, Mr. Hoh said.

In North Carolina, the Green Party typically carries only a small fraction of the vote. In 2020 it received 0.04 percent in the general election there, and 0.26 percent of the vote in the national presidential election.

A professor of political science at John Jay College of Criminal Justice, Susan Kang, said to expect more of these sorts of challenges aimed at keeping third parties off ballots — especially in places where the races are tight.

"I think it really depends on the context — in solid districts it will matter less," she told the Sun. "In purple states we would expect more challenges. That's where you'll see the vast majority of challenges."

Ms. Kang said other states that are likely venues for such challenges in 2022 include Virginia, Arizona, and Wisconsin. In past election cycles, such tactics have been employed to push Green Party candidates off the ballot in Wisconsin, Texas, Pennsylvania, and Montana.

Democrats are not the only ones turning to such tactics, Ms. Kang said. Expect to see similar challenges to Libertarian Party candidates in swing states such as Arizona, where Governor Ducey has in the past lobbied to increase the number of signatures required for a party to get on the ballot.

In 2020, Texas Republicans attempted to kick 44 Liberarian candidates off of the ballot but their efforts were blocked by the Texas Supreme Court because the deadline for challenges had passed.