Have the Democrats run out of gas as a party? Cornel West thinks so! 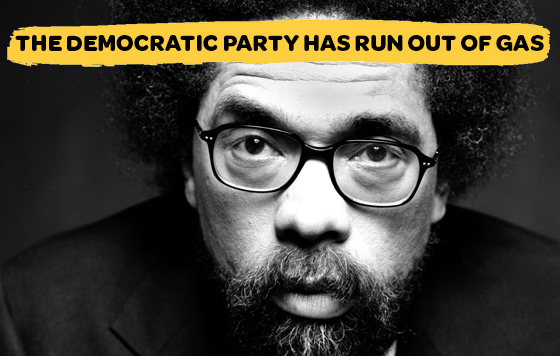 The time has come for the left to admit the truth—the Democratic Party has, as Cornel West recently said, run out of gas.

It's time to get even more serious about building the Green Party of the United States (GPUS).

We need a party that will stand up against "normalizing" Donald Trump and his right-wing cabinet appointments like former presidential rival Dr. Ben Carson for Housing and Urban Development and charter school and school voucher champion Betsy DeVos for Department of Education.

We need a party that puts climate first, demands redress for corporate thievery and rampant damage to our environment, and makes good jobs the centerpiece of public policy to end income inequality once and for all.

GPUS can do that, and a lot more—with your help.

2017 is staring us in the face and the National Steering Committee is planning to solidify and extend the gains we made in 2016.

What gains? In addition to successfully electing candidates in 8 states at the local level, we secured ballot access in 22 states—the most ever!

Ballot access is the starting point. If we're not on the ballot we can't change anything. So a big part of next year will be getting on the ballot in the remaining states, especially Texas and Massachusetts.

Another big priority will be candidate schools nationwide to help train interested candidates on how to win. We train up candidates for 2018 mid-term elections this coming year.

And of course, we will need to raise as much money as we can to help fund candidates, too.

These are some of the basics necessary to build a party that is not a Neoliberal echo—a party that doesn't go along to get along, a party that is truly transformative in its goals and reach. A grassroots party in all 50 states that can get out the message, recruit candidates, get out the vote, and win elections.

Again, we can do it – with your help!

None of these goals will happen without your support. So please, give today with an eye toward 2018.

Please give as much as you can today, and think seriously about making a monthly sustaining donation if you don't already.

Dr. Cornel West is right. The Democratic party is out of gas. It's too far gone for reform. And the massive losses this election have put it beyond life support.

It's up to us to become the party we need and deserve.

Please give today so we can secure ballot access, recruit and train candidates, and run successful races in 2018.

P.S. By starting now, we can get our ground game going in more places than ever before and affect more races than ever before. What we do now will spell the difference between winning and losing in 2018, and building a party that can give the 99% the political representation it needs and deserves. Give today to represent the 99%.