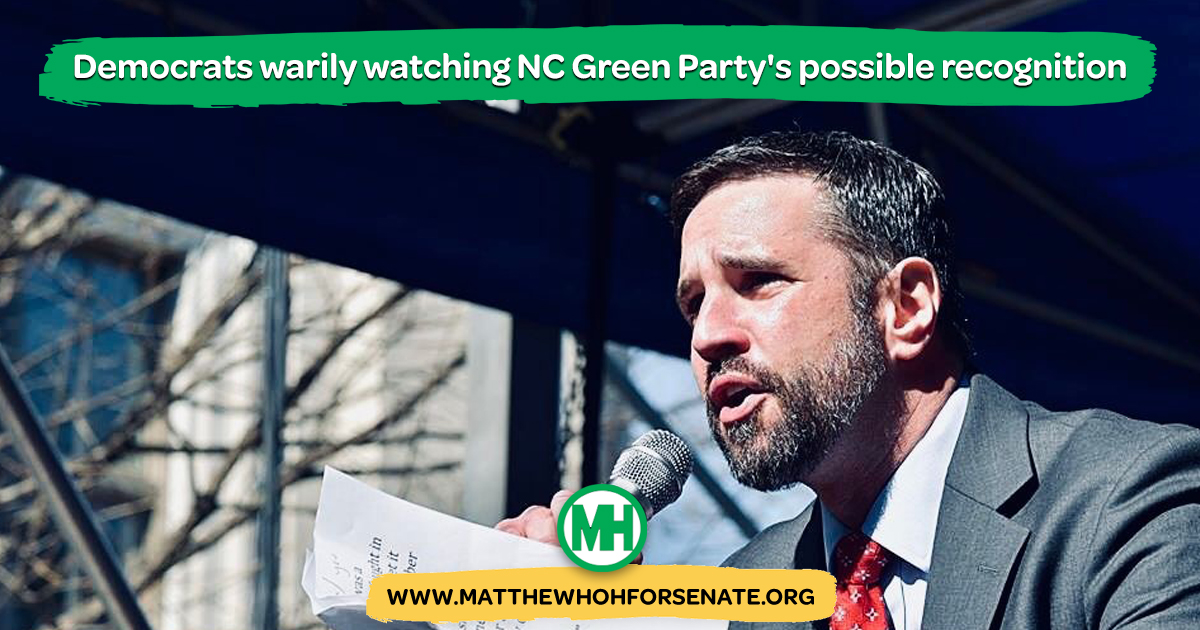 The State Board of Elections will meet later this week to determine whether to grant the North Carolina Green Party official recognition, a decision that could have significant implications for a closely watched U.S. Senate race.

Certification from the state board would enable registered North Carolina voters to affiliate with the Greens and it would allow Matthew Hoh to add his name to the ballot for this year's U.S. Senate race, a seat opened up by Republican Richard Burr's pending retirement at the end of what is his third term.

Libertarian Shannon Bray and the headline contenders — Democrat Cheri Beasley and Republican Ted Budd — are already on the ballot.

The North Carolina Green Party has officially endorsed Hoh, a Marine Corps veteran who has served in Iraq and Afghanistan. If the party is recognized by the state, Hoh then would have to be formally nominated at a party convention.

But the far-left Greens could face a legal challenge from the Democratic Party.

"I would say that the party is looking out for its own self-interests," Bitzer said.

Much at stake in U.S. Senate race

The senate race is a key battle in this year's mid-terms, with control of Congress at stake and plenty of outside attention and money pouring into the contest. In Beasley and Budd, it features the first Black woman to serve as chief justice of the North Carolina Supreme Court running against a hardline conservative GOP congressman endorsed by Donald Trump.

"Those votes that go to potential Green Party candidates, or are among Green Party voters, those could make the potential difference if you're talking about close elections, not just at the U.S. Senate race but, potentially, at state legislative races," Bitzer said.

Bitzer said political scientists often refer to alternative parties like the Greens and Libertarians as "spoilers" because of the impact their candidates could have on major party campaigns.

"How can you spoil a system that's already pretty much rotten to the core?" Ndege asked.

The Greens' path to recognition

Ndege describes the Green Party as an "ecological socialist" organization, one that supports a $20-per-hour minimum wage, free education and universal health care.

"We're an antiwar party and these are two major corporate, capitalist parties," he added, referring to Democrats and Republicans.

The Greens were last recognized as a party in North Carolina in 2020. But after Green Party candidates failed to garner at least 2% of the vote for either president or governor that year, the party lost its official status.

This year, they are petitioning to reclaim their recognition by presenting enough valid signatures from registered North Carolina voters.

"We're confident that we're well above the threshold," Ndege said.

According to data maintained by the State Board of Elections, the Greens have collected more than 22,000 raw signatures, more than 15,000 of which have been validated at the county level. But those numbers are preliminary and they must be verified by the state board, too.

Under state law, the valid signatures must come from registered voters, including at least 200 each from three of North Carolina's congressional districts and the number of signatures must equal one-quarter of 1% of the total number of voters who cast votes for Governor in the most recent election. By those criteria, the North Carolina Green Party needs to obtain at least 13,865 signatures.

Mac McCorkle teaches at Duke University's Sanford School of Public Policy and was a longtime Democratic consultant and operative in North Carolina politics.

"There could be some discontent on the progressive side," Mac McCorkle said. "Beasley is portraying herself as more of a moderate candidate than maybe some people like."

But McCorkle added that the senate race is less about the candidates on the ballot and more about Republican Budd's most prominent supporter, former President Trump.

"It's still 'Are you for him or against him?'" McCorkle said with a laugh. "And, so, a lot of people I think will not be wanting to waste their vote."