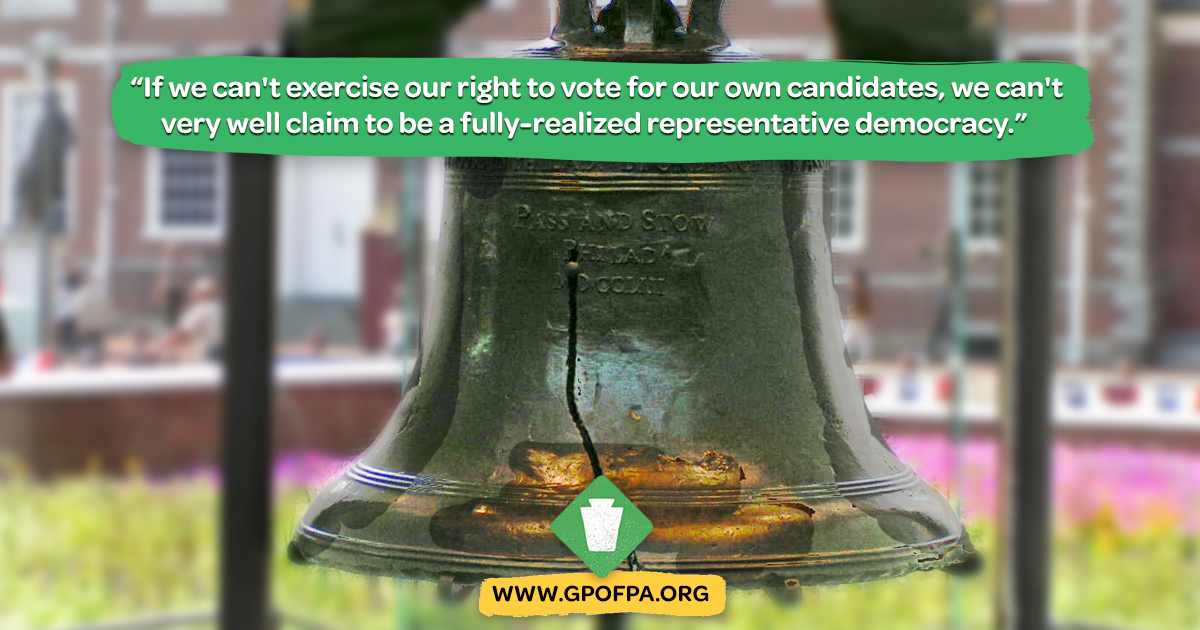 PHILADELPHIA – According to reports from the Associated Press, the PA Democratic Party has already signaled it intends to appeal a decision by Commonwealth Court to the PA Supreme Court. This on-going legal action risks delaying the printing and distribution of mail-in ballots, which are more critical than ever while the state still faces a lethal pandemic that makes typical events and voting systems unsafe. Any delay to the printing and distribution of ballots narrows the time window for voters to return the ballots in time to be counted.

"The Green Party of Pennsylvania (GPPA) calls on the PA Democratic Party to drop its frivolous legal challenge," demanded GPPA Secretary Beth Scroggin (Chester). "Democrats should allow the mail-in ballots to be printed and distributed widely as soon as possible, and instead use their energy and money to join the Green Party in fighting against climate change, poverty, war, and the growing creep of fascism. The Democratic Party is now reinforcing growing concerns that cuts to the U.S. Postal Service by the current administration may further delay the return of mail-in ballots."

Green Party presidential candidate Howie Hawkins had been placed on the Pennsylvania ballot alongside the Green Party's other statewide candidates according to a ruling by Commonwealth Court Judge J. Andrew Crompton on 9/9. GPPA Co-Chair Alan Smith (Chester) explained, "The Democrats had sued saying our signatures were fake. More than 30 volunteers spent countless hours reviewing the signatures, which were ruled valid by the court. The Democrats sued saying our paperwork was inaccurate. The court ruled that our paperwork was valid except for one minor technicality with an affidavit. For that reason, Angela Walker, the queer, Black woman we nominated for vice president, will not appear on the ballot. The Democrats forced our people to spend thousands of dollars and countless hours in a frivolous lawsuit all to get a queer, working class Black woman -- who works for people, planet, and peace -- removed from the ballot."

"It is clear that we submitted sufficient ballot signatures to be on the ballot. Angela Walker should be listed on the ballot alongside myself," said Howie Hawkins. "Democrats are causing needless delay and disruption, because even as it stands with Angela not on the ballot, our presidential electors can still vote Angela Walker for Vice Presidential if we win Pennsylvania." Without Howie and Angela on the ballot, no one will be talking about moving away from fossil fuels (fracking is a huge problem in PA) to avert climate meltdown. No one will be calling for a 75% reduction in military spending to be reinvested in our communities.

The Democratic Party had initially alleged various "defects" with the Green Party's petition signatures before volunteer validators confirmed that many of these challenges were erroneous. For example, some false challenges brought by the Democratic Party include claiming that living people who signed the petition were dead when they could easily be confirmed to still be alive; claiming that some registered voters were not registered at the address they signed, when a quick check of the registered voter database confirmed the address; and claiming that perfectly-legible signatures were "illegible." After Green Party volunteers had validated that many of the challenges were in error, the Democratic Party agreed to drop its challenge against the signatures and the down-ballot candidates, but continued with legal action against the Green Party presidential and vice-presidential candidates alleging that their paperwork was incorrectly filed.

Garret Wassermann (Pittsburgh), leader of the GPPA Green Wave Team, said, "The Green Party also calls for the PA General Assembly to end voter suppression by enabling easier ballot access and switching to a ranked choice voting system. Greens in PA must collect hundreds or thousands of signatures to be placed on the ballot for state office, while many democratic nations around the world such as Canada and the UK require only 100 signatures or less to run for national office."

Tina Olson (Northampton), GPPA organizer in the Lehigh Valley, expressed her dismay, "These outlandish moves by the Democratic Party to suppress the rights of Green Party voters come as a shock and disappointment. This kind of voter suppression is just one of the many reasons that voters end up staying home on Election Day. If we can't exercise our right to vote for our own candidates, we can't very well claim to be a fully-realized representative democracy."

"Reject Militarism on the Anniversary of 9/11" by Howie Hawkins, September 11, 2020,
https://howiehawkins.us/reject-militarism-on-the-anniversary-of-9-11/;

"PA Greens will not be Silenced by Democrats," Green Party of Pennsylvania News Release, August 12, 2020, https://www.gpofpa.org/pa_green_party_will_not_be_silenced_by_democrats; and