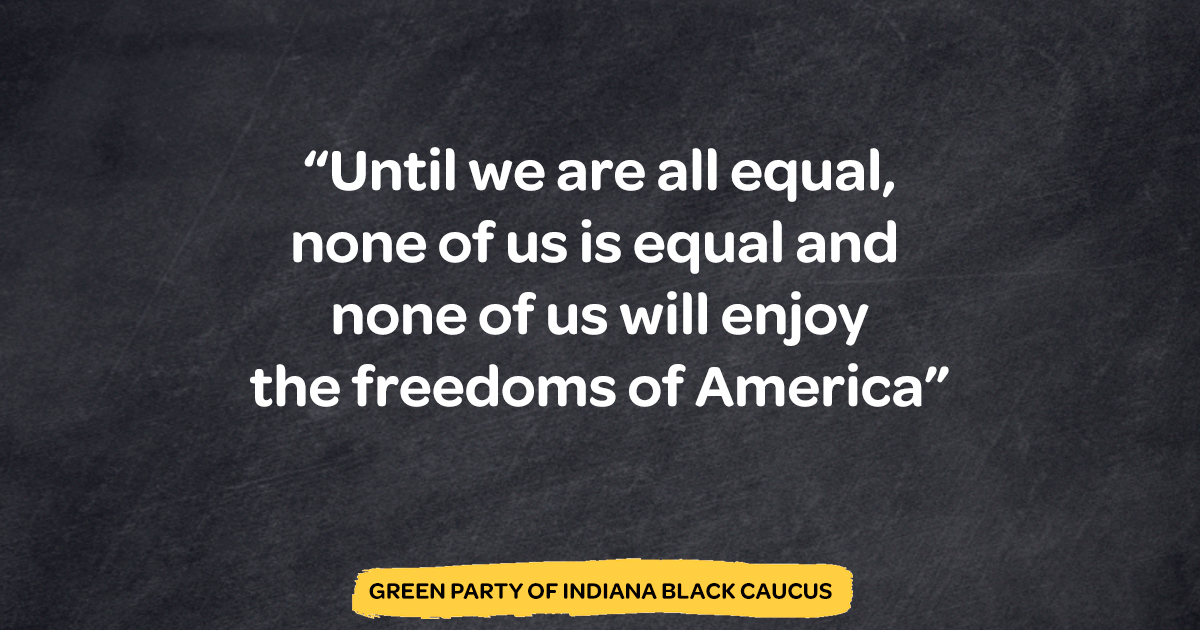 INDIANAPOLIS – The Indiana Black Caucus stands in solidarity with every community that has experienced recent police murders, especially in the past 30 days, and releases the following statement:

As Black and Brown people are being brutally beaten or murdered with the perpetrators getting free passes and paid vacations, the Indiana Black Caucus calls for an end to police brutality and for a review of the laws, procedures and policies that impact community policing.

Our elected officials and the executive branches responsible for law enforcement continue to fail our Black & Brown communities. We hear you, and we see you! And we will not be silent on election day. We challenge all elected officials around the United States to stand in solidarity. It is your obligation to see and hear our pain. You must be ready to make a change in policing for all citizens and especially in the Black & Brown communities in OUR America!

We are calling on all government officials, elected and appointed, to hold law enforcement officers and agencies accountable. We demand that Black and Brown people be afforded respect and due process, and that the police be prevented from putting Black and Brown people to death without trial. Such abusive police behavior violates both our constitutional civil rights and universal human rights.

We call for a change in community policing that includes the formation and management of police boards. These boards must be citizen elected and managed. We demand full blown police review boards consisting of citizens that represent every political party of that Community, with decision making and prosecutorial power that is enforceable by law. We call for an end to predominately white police forces and demand that all police forces reflect the diversity in the communities they serve.

We further demand that every police officer committing the murder of any individual be arrested at the scene of the crime as any other murder suspect would be, rather than being arrested only after completion of an investigation. Upon arrest, such an officer must be tested for drugs and alcohol, and should be required to undergo a complete mental evaluation.

We demand that all police officers dealing with the public on a daily basis be required to purchase malpractice or another form of liability insurance, paid directly by the police officers out of their own after-tax income, and not as part of their taxpayer funded salary or bonuses. It is the responsibility and the duty of the government to provide effective oversight of law enforcement officers and agencies. Taxpayers should no longer be subjected to the misuse of their tax money to cover up criminal abuses; nor should their tax money be used to fund payments to victims and communities as a result of the governments' failures to protect and serve the community. Any officer who allows his/her liability insurance to lapse should, in the first instance, be suspended without pay until coverage is reinstated. A second violation should result in immediate termination without eligibility to be rehired. All liability claims must be reported to the insurance carrier, which may increase premiums or deny coverage to negligent officers.

Annual clinical psychological evaluations for all officers should be included in their benefits. Further, follow-up evaluations must be required post any incident that resulted in a death caused by an officer, not only for the officer who caused the death, but also for any officer who witnessed such a death or other traumatic incident. Officers who experience trauma should be offered regular counseling services and be required to have mental health check-ups at least twice a year.

All police cars must be equipped with voice activated recording devices and body cameras must be automatically activated by voice or movement of the officer. These devices must be tamper resistant and able to be activated remotely when an officer responds to an incident. If the system fails to record the activity of an officer, that officer or district will be liable, as a private citizen for any incidents that result in injury to persons (mental or physical) or property or death.

If we are to realize the ideal of the United States being the “land of the free and home of the brave," these changes are essential. A citizen is not free who does not feel safe. As such, substantial changes in laws that allow private citizens to conduct "extra-policing" activity outside of the protection of their own home or property must be made. Citizens are encouraged to assist when help is needed for someone being abused, but they must rely solely on law enforcement to execute any form of restraint or arrest. Citizens will no longer be afforded the defense that they "felt threatened," but must have a verifiable reason for any act of self defense, inside their home or property. An extra high burden of proof should be required for a claim of self-defense in any community location other than their home or property.

The preamble to the U.S. Constitution, reads: “We the People of the United States, in Order to form a more perfect Union, establish Justice, insure domestic Tranquility, provide for the common defense, promote the general Welfare, and secure the Blessings of Liberty to ourselves and our Posterity, do ordain and establish this Constitution for the United States of America.” For many Black and Brown people, having to recite this preamble as a requirement of graduation is difficult, knowing how our Government has failed to protect our children. We demand that local, county, state, regional, and federal governments take measures to fulfill the promise of America to all residents, whether a native born or naturalized citizen, a documented or undocumented resident.

Those who champion a pro-life agenda, not only in their churches but also in government, and other advocates, some of whom are very rich people, corporations, and lobbyists, seem to fight for everything and everyone, except the children in Black and Brown families and communities. This can no longer be expected or acceptable. Until we are all equal, none of us is equal and none of us will enjoy the freedoms of America.

The platform of Green Party of the United States calls for legislation and policies to ensure that children always be deemed in a class of citizenship that is owed the protection of the government. The Indiana Black Caucus calls for this to be addressed immediately! We demand that families and children be freed from the cages they are held in by immigration and that all persons unfairly incarcerated in immigration detention be provided Government financial support.

We demand laws and enforcement of laws that will combat the systemic and institutional racism, discrimination, and brutality that affect children of color in our schools and communities. The police should not be used to monitor behavior in our schools, too often policing them based on their Black or Brown skin or their language, and too often contributing to the school to prison pipeline.

We are looking forward to positive changes and leadership behind which all Americans can unite, and which is worthy of respect.

We stand in solidarity with George Floyd - Minnesota, Ahmaud Arbrey - Georgia, Dreadjon Reed - Indiana, Ashlynn Lisby – Indiana, Breonna Taylor – Kentucky, and the many others who have died at the hands of police, under government-sanctioned or allowed, unfairly applied in our communities.