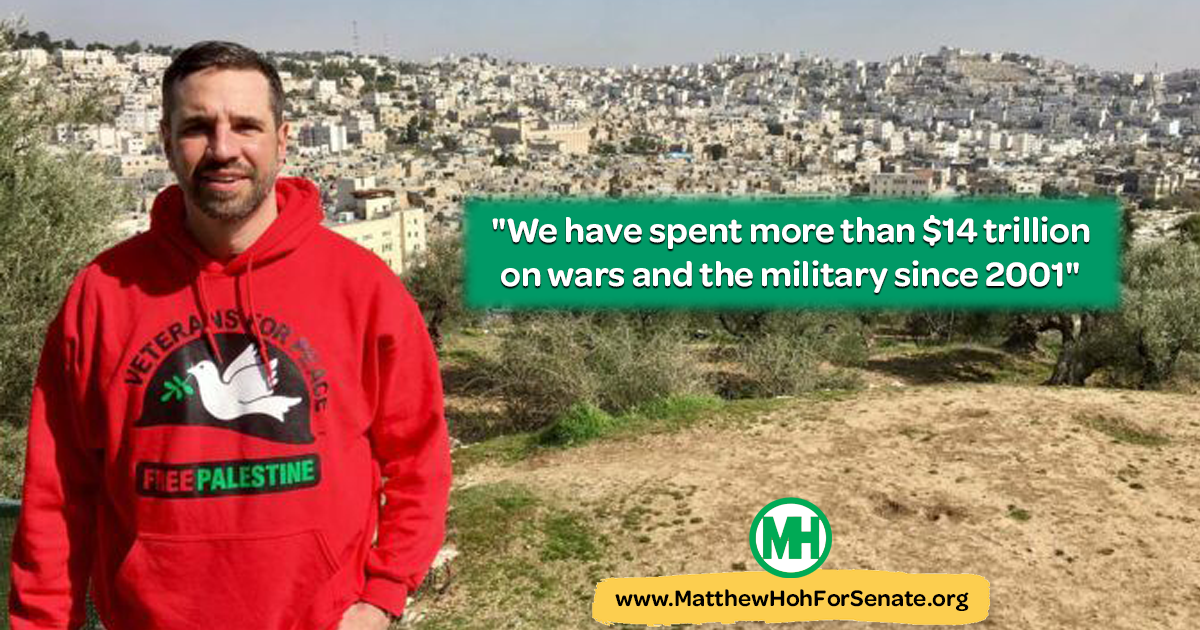 In recent years, both major parties in the U.S. have been recruiting former members of the military, the foreign service, or national security agencies to run for Congress. Almost all of these so-called "service candidates" are either conservative Republicans or corporate Democrats, who quickly become part of the bi-partisan majority on Capitol Hill which rubber-stamps ever larger Pentagon budgets and fails to get big money out of politics.

Two years ago, the Democratic Senatorial Campaign Committee (DSCC) bet heavily on four ex- military officers running for US Senate seats against right-wing Republicans in Arizona, Texas, Kentucky, and North Carolina. Despite much Super-PAC spending on their behalf, only one of them, former astronaut Mark Kelly, actually got elected.

In North Carolina, nearly $300 million was raised and spent either by incumbent Senator Thom Tillis, his challenger, Cal Cunningham, or outside groups backing them. A lawyer and former state legislator, Cunningham was commissioned in the Army Reserve, Judge Advocate General's Corps, after Al-Qaeda's 9/11 attacks. He then served on active duty in Iraq and Afghanistan, reaching the rank of lieutenant colonel and earning a Bronze Star. As the New York Times reported, the Democratic nominee "leaned heavily on his character and biography, playing up his military service and presenting himself as an inoffensive moderate."

Cunningham's emphasis on "honor" and "duty" was supposed to play well in a state with 725,000 veterans, 100,000 active duty military personnel, and 11,000 National Guard members and reservists. Unfortunately, he was caught sexting with the wife of a fellow veteran during the final days of his campaign. The resulting personal embarrassment and bad press proved to be a major distraction for the married father of two. Right after Tillis won by a margin of 48.7 to 46.9%, then-Minority Leader Chuck Schumer told Democratic donors that Cunningham's failure "to keep his zipper up" had harmed the party's chances of regaining the Senate (which it did until, a few months later, two non-veterans won runoff elections in neighboring Georgia).

In this year's competition for North Carolina's other Senate seat, another military veteran–who was definitely not recruited by Schumer or the DSCC– has announced his candidacy. Former Marine company commander Matthew Hoh is a critic of big money in politics, who is not running as an "inoffensive moderate." So that insures that no wealthy donors and corporate Super-PACs will be investing in his political future. Adding to the hurdles ahead of him, 48-year old Hoh is making his first bid for public office as a Green Party candidate. This pretty much guarantees that more than a few local Democrats will view him as a potential "spoiler," draining votes away, in November, from Cheri Beasley, who has raised more than $8 million for her primary campaign.

An African-American lawyer, former public defender, and past chief justice of the state supreme court, Beasley is the likely winner of that May 17 contest. In the Republican primary race, U.S. Rep. Ted Budd, a Freedom Caucus member, has developed a double-digit lead over former Republican Governor Pat McCrory. In the same poll, the Trump-endorsed Budd was found to be the best Republican performer in any match up against Beasley. Among voters surveyed, Budd led Beasley by a margin of 50 to 43 percent, with the rest still undecided. 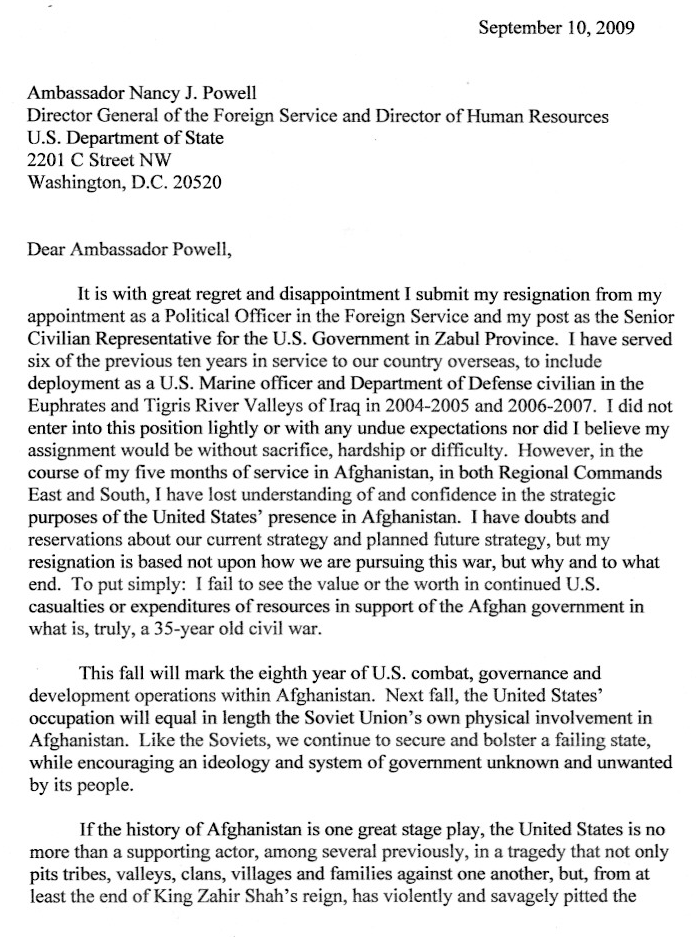 What took Hoh from multiple tours of duty in Iraq and a later State Department civilian posting in Afghanistan to his new role as a third-party standard-bearer in the Tar Heel State? One major turning point in his career, occurred fourteen years ago, when he publicly resigned as a foreign service officer after a five-month assignment in Afghanistan's Zabul Province. In a widely-publicized letter explaining his decision, Hoh warned the Obama Administration "that the bulk of the insurgency fights not for the white banner of the Taliban, but rather against the presence of foreign soldiers and taxes opposed by an unrepresentative government in Kabul." By 2009, U.S. support for this collection of "opportunists and strongmen" reminded Hoh "of our involvement with South Vietnam, an unpopular and corrupt government we backed at the expense of our nation's own internal peace, against an insurgency whose nationalism we arrogantly and ignorantly mistook as a rival to our own Cold War ideology."

Unlike most other Iraq or Afghanistan veterans who've become politicians in the past two decades, Hoh's critique of U.S. intervention was "not based on how we are pursuing this war, but why and to what end." His prophetic dissent won him, in 2011, a Ridenhour Prize for Truth Telling, an award named after the Vietnam veteran whose 1969 letter to Congress helped blow the whistle on the massacre of Vietnamese civilians in the village of My Lai. Like Ron Ridenhour, who later did investigative journalism, Hoh became a prolific writer and commentator for both mainstream and alternative media outlets, including the Atlanta Journal-Constitution, Raleigh News & Observer, USA Today, Wall Street Journal, Washington Post, Huffington Post, Mother Jones, CounterPunch, and the Guardian. He also made hundreds of highly articulate guest appearances on radio and TV news shows, aired by NBC, MSNBC, CBS, CNN, Fox News, CSPAN, NPR, Pacifica and PBS.

Eventually, Hoh decided that he needed to do more than speak and write against "forever wars," participate in Veterans for Peace and the Eisenhower Media Network, and help other veterans deal with mental health and substance abuse problems of the sort he has personally experienced. (Hoh has a 100% disability rating from the Department of Veterans Affairs, based on a traumatic brain injury diagnosis and other service related conditions). Green Party activists in North Carolina, where he has lived for most of his life, urged him to use a Senate campaign to call for a re-ordering of national priorities and "a future beyond war and Wall Street."

Hoh is following in the 2020 footsteps of the GP's all-veteran national ticket, headed by former Marine Howie Hawkins and Angela Walker, who served in the Army Reserve. Like the Hawkins-Walker slate in many states, the Hoh for Senate campaign faces the immediate challenge of collecting enough signatures to get on the general election ballot—in this case, 14,000 by May 15. (As of early April, Hoh petitioners had signed up 6,200 North Carolina voters and raised $20,000 in small donations to support this effort; in June, the candidate must also be formally nominated at a statewide Green Party convention).

Past support for the Greens in North Carolina—and even the Libertarians, who regularly gain ballot access for federal races—has been in the single digits. But Hoh argues that it's important "to have a candidate who represents a viewpoint that's completely different from Beasley, a very centrist Democrat, and the Republicans." All of the programs he is promoting—like a Green New Deal, Medicare for All, student debt cancellation, and paid family leave and sick days—would benefit poor and working-class voters, now being battered by high gas prices. "We have spent more than $14 trillion on wars and the military since 2001," Hoh points out. "Meanwhile, both Democrats and Republicans tell us we don't have enough money to fight climate change, deliver healthcare, and provide for universal higher education, among other things." He believes that "people are sick and tired of politics as usual" and "hungry for a new kind of politics" because "the Democratic and Republican parties do such a terrible job representing us."

In recent campaign related events, Hoh has teamed up with Code Pink leader Medea Benjamin, to discuss Russia's war in the Ukraine, and with past Green Party vice-presidential candidate Ajamu Baraka, on the topic of movement building against "two-party tyranny." Among average voters, he is encountering "bewilderment and dismay over being in another war." His hope is that someone who has seen combat—and personally experienced its damaging impact at home and abroad—can provide a reality check on the campaign rhetoric of other candidates operating within the same "bi-partisan consensus."