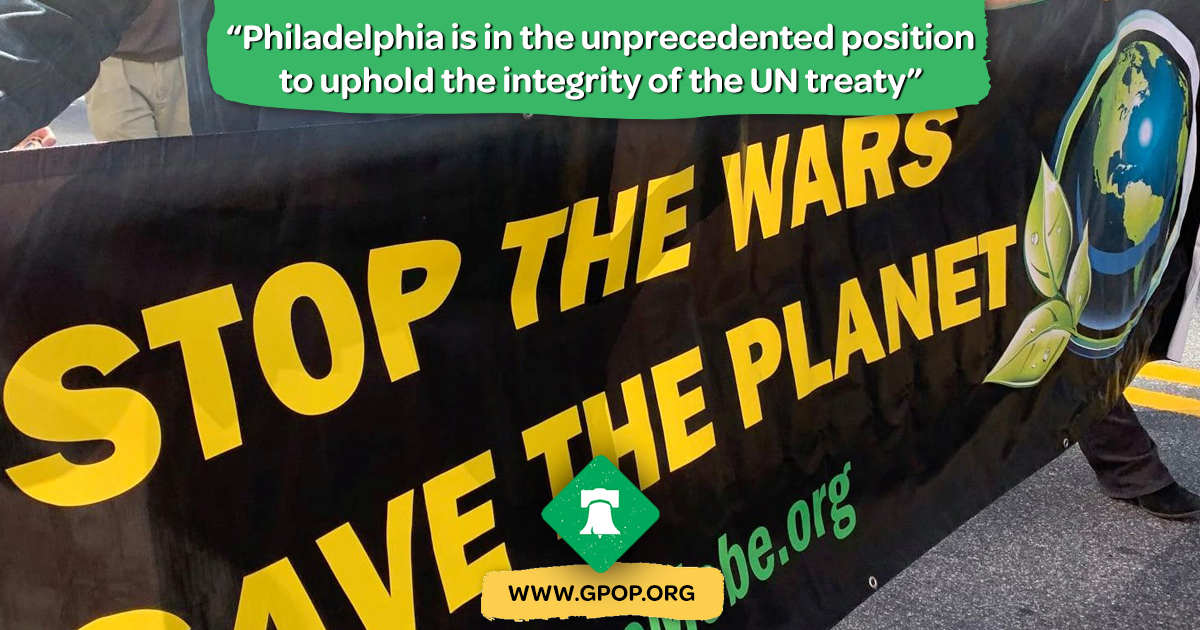 PHILADELPHIA – The Green Party of Philadelphia City Committee (GPOP) continued its support for Divest Philly from the War Machine by calling on people to join a campaign to divest the Philadelphia Board of Pensions from the nuclear weapon industry.

Divest Philly is a coalition of 27 local organizations which desire a cut in the Pentagon budget and greater investment in public services. At the present time, the managers of Philadelphia’s pensions have more than $11 billion invested in the nuclear weapon industry. Divest Philly would like the pension board to screen Philadelphia’s funds to eliminate all investments in the nuclear weapon industry. The leaders of Divest Philly from the War Machine have been in negotiations with members of Philadelphia City Council to enlist sponsors for their proposed bill.

GPOP City Committee Member Olivia Faison from Ward 60 (Garden Court) explained, "The United Nations Treaty on the Prohibition of Nuclear Weapons that was entered into force in January 2021, made nuclear weapons illegal. The Philadelphia City Council has already unanimously passed a resolution calling on the U.S. Government to comply with the treaty. This fills me with hope that our City Council has shown some common-sense leadership on this economic and moral issue. The Green Party platform has long called for the U.S. to ‘end the research, testing and stockpiling of all nuclear weapons of any size.' Philadelphia is in the unprecedented position to uphold the integrity of the UN treaty, and of our own city, by supporting this courageous display towards nuclear disarmament and world peace by passing this bill proposed by Divest Philly from the War Machine."

“The public sector at all levels of government has historically invested resources in military technology and not civilian technology," said GPOP Recording Secretary Tre Schumacher from Ward 17 (Logan). "So many of our scarce resources -- land, labor, and capital -- are allocated to unproductive or harmful activities like rents, pollution, speculation, and war. (Re-)Allocating our resources to meaningful production -- for example, creating jobs for regenerative agriculture, education, civilian R&D, and green infrastructure, utilities and manufacturing -- is impossible without first divesting resources that are currently dedicated to unproductive pursuits like nuclear weapons."

"We have to put our money where our mouth is," said GPOP Treasurer Hillary Kane from Ward 46 (Cedar Park). "It's not enough for us to take a stand as a City in words only; we must also back that sentiment up with clear action. Divestment is an important way to do this in the language that corporations and markets speak -- the language of money."

“Since Philadelphia is the poorest large city in the U.S., we should divest our funds from (often failed) military efforts of any kind,” said Chris Robinson, a GPOP member from Ward 59 (Germantown). “Instead, we should invest in affordable housing, economic development, safe public schools, city infrastructure, sanitation, or any of the countless dire needs facing us right now.”

Volunteers who wish to join Divest Philly from the War Machine may register right here. Community organizations which would like to endorse this Divest campaign may sign up here.