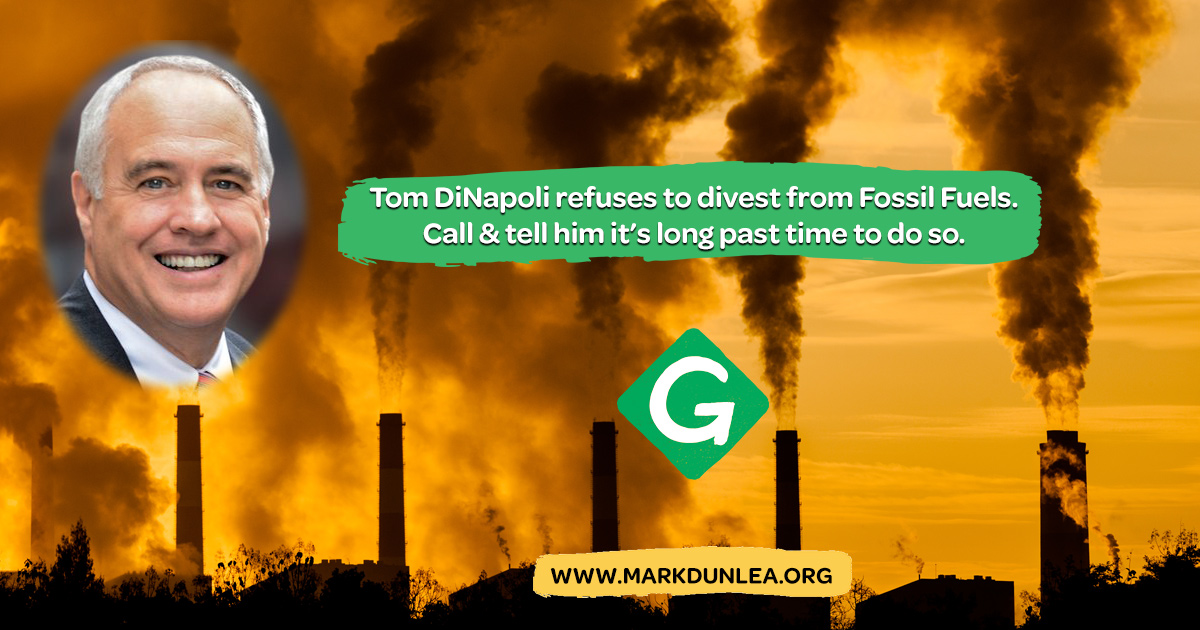 Please help in the effort to stop climate chaos by calling NYS Comptroller Tom DiNapoli at 518 474-4044 and urging him to divest the state pension funds from fossil fuels (you can also tweet him at @TomDiNapoli or @NYSComptroller).

Please divest the NYS pension from fossil fuels. It is wrong to invest the pension fund in companies that are destroying the planet through global warming. And is increasingly a risky financial investment.

You can also sign a petition calling for DiNapoli to agree to divest. DiNapoli can make the decision to divest by himself.

I would also welcome the opportunity to talk to groups in your community about divestment and climate change.

NYS says it has $6 billion of the state pension funds invested in fossil fuels, including $1 billion in Exxon. Others say the figure is close to $11 billion. NY is second largest pension plan in the country. NYC recently announced it would divest.

Last Monday in San Francisco, Divest Invest and 350 announced that nearly 1,000 institutional investors with assets of $6.24 trillion have committed to divestment, up from $52 billion just four years ago -- a stunning increase of more than 12,000 percent. The groups also threw down a challenge to reach $10 trillion in divestment commitments by 2020. New York City and London also announced that they will work with other cities around the globe to divest and invest in climate solutions that build jobs and resilience.

DiNapoli unfortunately seems to be getting even more stubborn about divestment.

Vicki Fuller, DiNapol's Chief Investment Officer, has been one of the main opponents of divestment. She recently left the Comptroller's office – and was appointed to the Board of Directors of The Williams Companies ($300k annual payment), one of the main natural gas pipeline companies who has spent huge amounts of money lobbying for expanded use of fossil fuels, including fracking. The state pension has $160 million invested in Williams. Groups are calling for a JCOPE investigation. It was also revealed that the Governor's campaign manager was also a lobbyist for Williams.

Divesting is an important step in fighting climate change, and one every government and trustee of public pension funds should take right now. It is based on the divestment campaign that was used to stop apartheid in South Africa.

Tom DiNapoli, the Comptroller, has repeatedly refused to divest, claiming he would be more effective in talking to Exxon, Chevron and other fossil fuel companies. But 50 years of shareholder advocacy campaigns have never produced any results. And even DiNapoli admits the recent study he got Exxon to do on climate risk was worthless – especially when the Attorney General of NY and other states are investigating Exxon and other companies for lying to the public and investors for decades about the reality of climate change.

Finally, join with the Mark Dunlea, Green for Comptroller campaign and help elect a candidate who will address climate change on Day One. You can donate and volunteer at the website, http://www.markdunlea.org and follow me on Twitter and Facebook.

I would also be happy to come to your community and talk about climate change and divestment.

Yours in Justice,
Mark