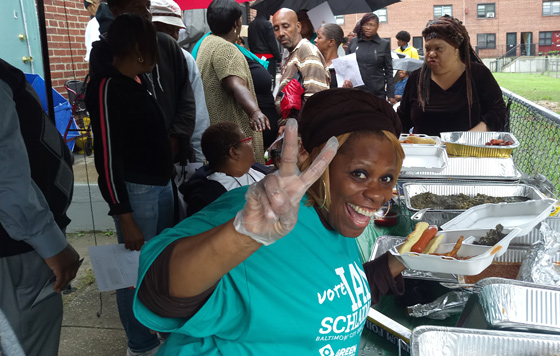 Thank you! Thanks to your support we've been able to do some amazing organizing here in Baltimore. Our city is facing a major housing crisis. The city and the Federal government have struck a deal to sell off most of the public housing in our district to wealthy developers. People are outraged that the establishment Democrats in power are allowing this to happen! So we're organizing, and when we organize and empower people to demand the right to housing, we can't lose. Help us keep the fight going.

Thanks to your support we're making historic progress. For those of us that have organized here in Baltimore for a while we know exactly why we're doing so well. No other candidate in this race has declared Housing a Human Right. No other candidate is 100% committed to voting yes on $15 minimum wage. No other candidate has promised to vote against giant corporate tax breaks for billionaires.

I know we ask for a lot and we're so grateful for all the support we've received so far, but if there's any way you can donate and share our grassroots green party campaign it will help all of us build local and long term change. Click here to help us!

PS: Former House Speaker "Tip" O'Neill famously said "all politics is local". I know everyone is focused on the big debate tonight, but the real work of a political campaign must take place on the local level. Even if you can only donate $1 that would be a big help. CLICK HERE to chip in. Just by giving a little bit to local races like this will help grow the movement for real grassroots democracy!