Stepping Out of Line – Dropping A Banner At FERC 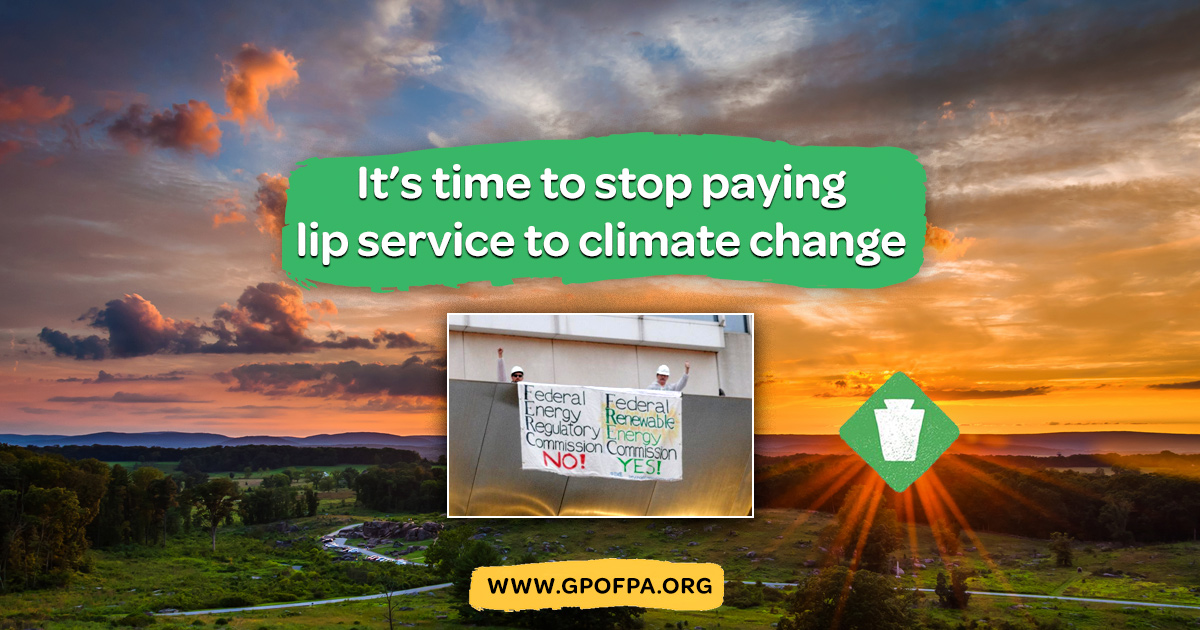 PHILADELPHIA – The activist toolbox is deep, and it has many tools. Throughout the years, Marcellus Outreach Butler (MOB) has used many: door knocking, educational forums, testifying, leafleting, petitions, rallies, lobbying our elected officials, marches, projections, letters to the editor, and a host of traditional political tactics. These are all useful.

However, when you’ve done all these things and you can get no traction, sometimes you have to dig deeper into the toolbox. I once heard singer/songwriter Anne Feeney say, in an introduction to her song Have You Been To Jail For Justice, “We have wonderful free speech rights in this country as long as we exercise those rights ineffectively. If our conduct might actually have an impact, it’s amazing how quickly we’ll be surrounded by police.”

Since 2015, a group that I have worked with, Beyond Extreme Energy (BXE), has been pressuring the Federal Energy Regulatory Commission (FERC) to recognize the role that it plays in climate disruption. FERC is the federal agency that approves interstate pipelines and other infrastructure. It has, throughout its lifetime, been a rubber stamp for the industry. It has rarely stopped a project and even when it has, it is usually temporary. Point of fact, until BXE shined a spotlight on FERC, it had never halted any project.

Many of these actions have resulted in expulsion from FERC or other venues. Some have resulted in arrests. All, however, have been carried out with a firm commitment to nonviolence. BXE is dedicated to harming neither people nor property.

Beyond Extreme Energy’s newest campaign (on behalf of millions of affected citizens who are frustrated by years of FERC’s approval of pipelines and other fossil fuel infrastructure, and alarmed by Donald Trump’s recent Executive Orders to further expedite pipeline approval) was launched with an action aimed at turning the Federal Energy Regulatory Commission (FERC) into the Federal Renewable Energy Commission (FREC). FERC is beyond reform and must be replaced with a government agency capable of meeting the challenge of climate disruption head on.

Very early on the morning of April 18, a small band of well-trained activists set out to send a strong message to the FERC Commissioners -- The time for continued reliance on fossil fuels is running out and, if the human race is to survive, we must turn our attention to developing alternatives. FERC must be phased out and FREC must be birthed.

Before the sun was up, a handful of us set off to drop a banner from the awning sitting 30 feet above FERC’s front door on First Street in Washington, DC. Some of us (including me) carried a ladder directly past a FERC guard and erected it. In short order, two of us scampered up to the awning and dropped the banner. Then we waited.

A few, well informed reporters from trusted news sources were on the scene, and interviews were conducted. A live stream from the awning commenced. People riding by on the subway (Metrorail) were able to see the banner.

Soon, FERC security arrived, then officers from the Federal Protective Service, then the DC fire department. A crowd of people heading to work also stopped to look. Some great conversations were had. Then more reporters showed up.

I was acting as a liaison with the police. I was to act as a conduit. I would communicate with both the police and the two people on the awning. The climbers had instructed me to tell the police that they wanted to stay with the banner until closing time. FERC security wanted them gone. The fire department said they would put up a ladder, but they would not “extract” anyone. In the end, the Federal Protective Service elected to allow the climbers to stay and made no attempt to remove them.

Meanwhile, on the livestream, Ted Glick, one of the BXE climbers said, “The Federal Energy Regulation Commission, FERC, has for years been overseeing a major expansion of the destructive fracked gas industry. FERC is a rubber-stamp agency. It has rejected only two, out of over 400, gas industry proposed pipelines and other gas infrastructure over the last 30 years. And at today’s meeting commissioners could approve two new liquefied natural gas export terminals in the criminal enterprise to hook the world on U.S. fracked gas for decades.”

Later, Drew Hudson, the other BXE climber, said, “Congress has a choice to make: they can pay lip service to climate action while Donald Trump orders pipeline after pipeline built -- locking in another 50 years of increasing emissions, gas exports and climate chaos, or Congress can choose to put renewable energy first and enact a Green New Deal that remakes FERC and other agencies. It’s past time to move urgently to get off fossil fuels!”

Many blanch at the thought of doing anything illegal, but I think it is important to put direct action, like the banner drop described above, in context. Too often, our voices are invisible to the power brokers. Our political voice is drowned out by the voices with money. It’s not that the system is broken. The system is working exactly the way it has been designed to work -- the rich and powerful have created a system that looks democratic but, in practice, rewards the elites and ignores the rest of us.

This isn’t new. Iconic moments from our history illustrate this. The Boston Tea Party was a powerful direct action, and it was illegal. The march across the Edmund Pettus Bridge in Selma, Alabama, was met with brutal police violence.

These actions happened because there comes a moment in every struggle when the power of everyday people needs to be felt, and when the community can only attain victory by stepping out of line and demanding change. If we are going to win, we must use the tools at our disposal. This doesn’t mean that you must risk arrest, but it does mean that you use the tools you are comfortable using, maybe even stretch your comfort zone. It also means recognizing that direct action, even direct action that leads to arrest, has a long tradition in the fight for justice.

The author is a Green Party member from Butler County, and he has been an elected member of the Cherry Valley Borough Council since 1989. This article first appeared in the summer issue of Marcellus Outreach Butler Newsletter.