Dunlea Calls on DiNapoli to Agree to Comptroller Debates, Including on Divestment 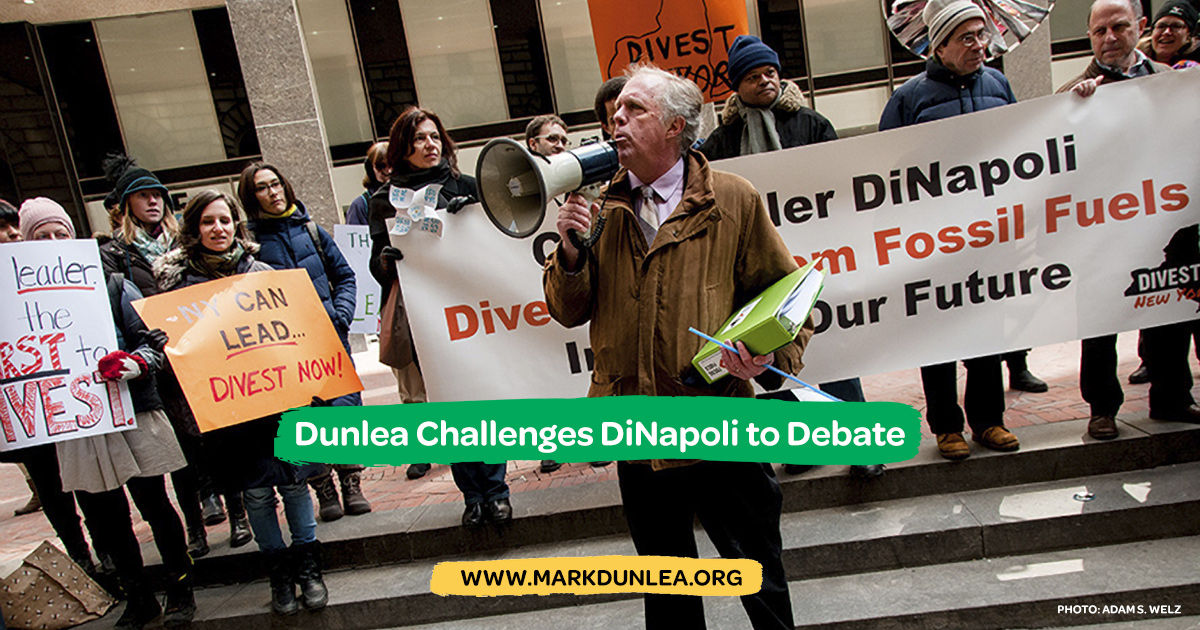 Mark Dunlea, the Green Party candidate for State Comptroller, called today for a series of debates in the state comptroller race.

Dunlea said that the debates should address issues such as divesting the state pension funds from fossil fuels, dealing with corruption by the Cuomo administration and state lawmakers, and providing fiscal relief to local governments.

“Challengers of course always want more debates, but let’s face it, most voters don’t know much about what the State Comptroller does or who the incumbent is. Having a series of debates spread across the state will help educate the public about the key role the Comptroller office can play,” said Dunlea.

Dunlea noted that since there are no primary contests for Comptroller, the general election candidates can start debating now.

Many New Yorkers are aware that the Comptroller runs the state retirement system. Dunlea has worked with 350.org over the last 5 years to urge the state to divest the pension fund from $6 billion in fossil fuel investments. Dunlea says it is wrong for the state to invest in companies that are driving destructive climate change and extreme weather that threatens the future well-being of state residents.

Momentum for divestment has been growing worldwide, with more than 700 institutions with $6 trillion in assets having agreed to divest. Ireland recently became the first nation to divest, and NYC leaders earlier this year said they plan to divest from the two largest funds.

“Investing in fossil fuels is an increasingly risky financial decision as the world moves away from fossil fuels. The former Acting State Comptroller Tom Sanzillo recently released a study showing that fossil fuels are underperforming the rest of the market. New York needs to get out while our investment still has some value,” added Dunlea. An investment firm hired by 350.org two years ago showed that the state pension plan would have had an extra $5 billion if the state had divested when 350 first asked it to.

While DiNapoli has argued that investment decisions should not consider policy issues, he recently agreed to divest the pension funds from private prisons and firms renting space to federal immigration authorities (ICE).

“The best way to reduce local property and sales tax is not with the Governor’s 2% tax cap, which has accomplished little tax relief, but rather to restore state revenue sharing with local governments to 8%. The state comptroller needs to be a stronger voice in pushing for tax fairness and accountability, including an overhaul of the wasteful corporate economic development programs which are mainly a boon to the Governor’s campaign donors,” said Dunlea.

When Dunlea was a Town Board member in Poestenkill in the 90s he managed to cut local property taxes every year while still increasing services. After he pushed for the town insurance contract to be put out to bid, the county Democratic chairperson ended up in federal prison for previously pocketing part of the premiums as an unnamed co-insurer. Dunlea also drafted the law giving taxpayers the right to sue for illegal expenditure of government funds.

Cuomo got the state legislature to strip oversight of certain state contracts from the State Comptroller’s office shortly before the Buffalo Billion contracts were awarded. Assembly Speaker Heastie recently sided with the Governor in blocking legislation to restore oversight and require more information on economic development after the Senate unexpectedly passed the bills. DiNapoli did not publicly push the Assembly, of which he was a member when appointed Comptroller, to pass the bills. Cuomo’s staff was recently convicted of corruption for rigging bids for the Buffalo Billion.