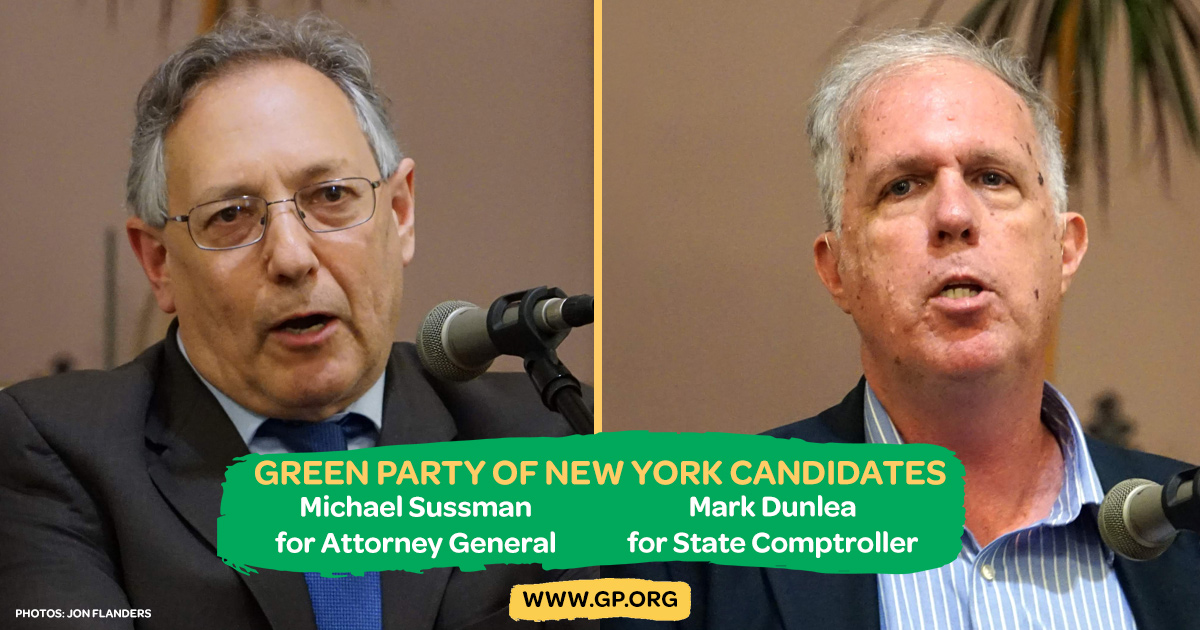 The Green Party of New York will hold a news conference at noon at the State Capitol on Friday May 25th to announce the nominations of Mark Dunlea for State Comptroller and Michael Sussman for Attorney General.

Sussman, an attorney from Orange County, is a 1978 Honors Graduate of Harvard Law School and has been one of the Hudson Valley's most prominent civil rights and trial lawyers since the 1980's when, as lead counsel for the Yonkers Branch of the NAACP, he helped end racial segregation in the City of Yonkers public schools. While at Harvard Law, Sussman worked with Ralph Nader and Mark Green to found the Equal Justice Foundation.

Sussman is well known for major legal victories, including the $6,000,000 settlement he attained for the family of DJ Henry, a Pace University student shot to death in October 2010 by Aaron Hess, a police officer employed by the Village of Pleasantville. Between 2006-2010, Sussman represented a class of 4,700 African­ American and Hispanic state workers against the Attorney General’s office in a lawsuit challenging the promotional test used by the State of New York for civil service promotions. The case ended in a settlement of $45,000,000 for the class. Since 1986 Sussman has been a pioneer in special education law, representing scores of disabled children in their quest for proper education placements and programs.

Dunlea, a resident of Poestenkill, is a long time anti-poverty and environmental advocate. For 28 years he helped lead the Hunger Action Network of NYS, working on a variety of poverty, economic justice, health care, housing, and corporate accountability issues. For the last five years, he has focused on climate change, including helping to coordinate the successful effort to convince NYC to divest its pension funds from fossil fuels. Tom DiNapoli, the present state comptroller and sole trustee of the fund, has refused to divest.

Dunlea is a former Town Board member in Poestenkill and a graduate of RPI and Albany Law School.

The Green Party is committed to ecology, grassroots democracy, nonviolence and social justice.