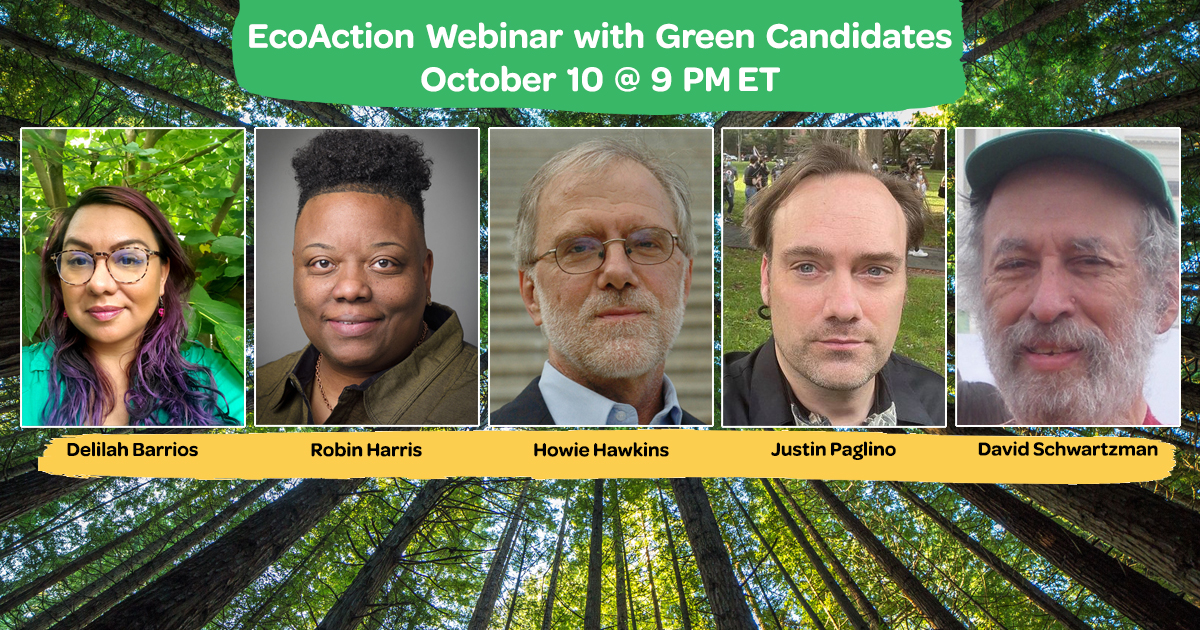 The EcoAction Committee of the Green Party of the United States is holding a webinar on Monday, October 10 at 9 pm ET (6 PM PT) highlighting Green Party candidates and climate action, including the Green New Deal, Zero Emissions, and environmental justice. The meeting is on zoom. Please register to get the zoom link.

We will also have short presentations on the October 29 March and Rally to End the US Blockade of Cuba in NYC in conjunction with the UN Assembly and a short update on Green efforts on  COP27 occurring in Egypt on Nov. 7 to 18.

Candidates speaking at our event include:

The event is part of EcoAction’s regular committee meeting the second Monday of each month at 9 PM ET (6 PM PT). Register here.

The Ecosocialist Green New Deal is an economic justice as well as climate justice program that enacts an Economic Bill of Rights that guarantees living-wage jobs, incomes above poverty, affordable housing, quality health care, lifelong public education, and a secure retirement. It seeks to solve the climate crisis by combining quick action to get to zero greenhouse gas emissions and 100% renewable energy by 2030 along with an “Economic Bill of Rights” – the right to single-payer healthcare, a guaranteed job at a living wage, affordable housing, and free college education.

EcoAction is part of the People vs. Fossil Fuels campaign and have long called for the President to declare a formal climate emergency and to issue comprehensive Executive Orders on climate action to overcome the opposition to climate action in Congress. (See climatepresident.org)