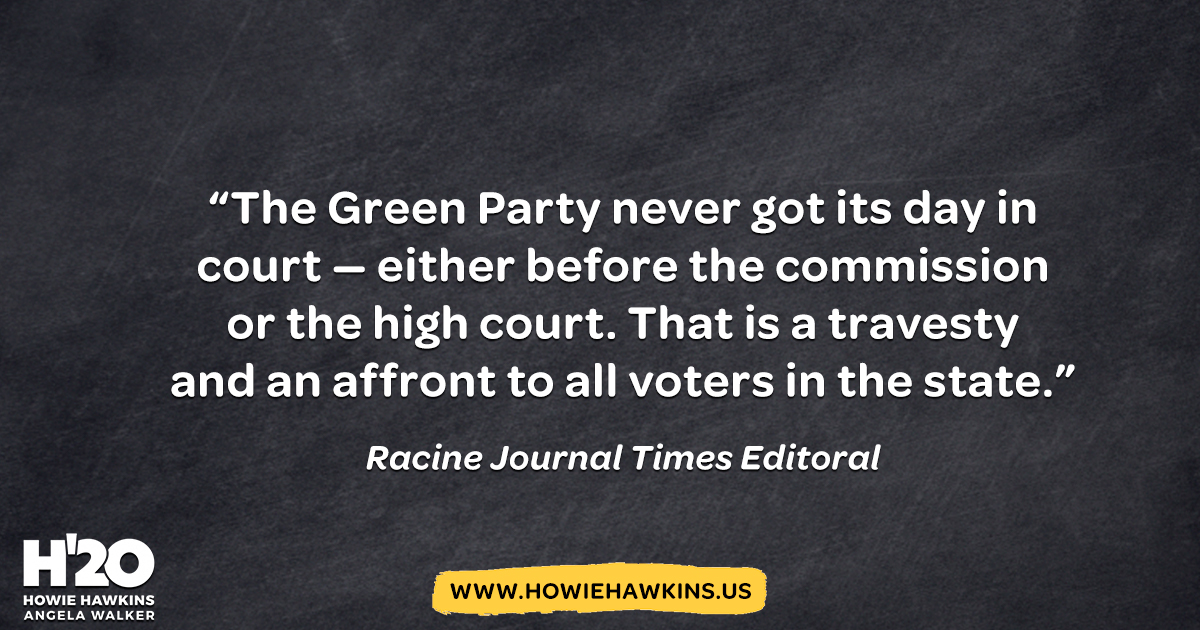 Over the years we have watched the rise in rabid partisan politics in Wisconsin, but they rose to new levels – or rather descended to new depths—in the past two weeks when Green Party candidates for president, Howie Hawkins, and vice president, Angela Walker, were denied spots on the Nov. 3 ballot by the Wisconsin Elections Commission and their appeal was brusquely dismissed by the Wisconsin Supreme Court.

The ballot denial was ostensibly over a discrepancy in Ms. Walker's address on her nomination petitions. The former Milwaukee bus driver who now resides in Florence, S.C., had moved during the time signatures were being collected this summer and, while her filing with the state had her current address, some of the nearly 4,000 signatures on her petitions listed her previous address.

The Journal Times
By the Editorial Board
September 20, 2020

That "discrepancy" could have been easily resolved had Ms. Walker filed a sworn statement on her move and when it occurred – and signatures both before and after her move would have counted, easily giving her more than the 2,000 signatures to get on the ballot.

But not today, not in our toxic political climate where both Democrats and Republicans seek any possible edge in the presidential elections in Wisconsin, which has emerged as a political swing state.

The real dispute here was not over an address, it was over the Green Party's potential to be a spoiler in the presidential race. In the 2016 presidential race, President Trump eked out a win over Hillary Clinton by the narrowest of margins — 22,748 votes. In that same year, former Green Party presidential candidate Jill Stein received 31,072 votes.

With Hawkins and Walker off the ballot, the hope of Democrats was that those Green Party voters would then gravitate to Democratic candidate Joe Biden.

Sure enough, a complaint was filed with the Wisconsin Elections Commission challenging Ms. Walker's signatures by Allen Arntsen, a retired attorney and former partner with the prestigious law firm of Foley and Lardner.

According to state Supreme Court records, the election commission staff notified the Hawkins-Walker campaign manager, Andrea Merida, of the challenge and was told she had the "options of filing a sworn written response or appearing at the August 20, 2020 Commission meeting to present evidence contesting Arntsen's challenge or doing both," according to a later Supreme Court dissent by Justice Patience Roggensack.

The Wisconsin Elections Commission is a peculiar body created by the state Legislature four years ago to replace the former Government Accountability Board, which had ired Republican lawmakers who perceived it as favoring Democrats. In its infinite lack of wisdom, the GOP-controlled Legislate set it up with six political appointees — two appointed by the governor, one each by the President of the Senate, the Senate Minority Leader, the Speaker of the Assembly and the Assembly Minority Leader. Instead of political balance, we got political gridlock, with three Republican appointees and three Democrat appointees.

Sure enough, in a contentious hearing with occasional shouting, the Wisconsin Elections Commission deadlocked 3-3 on a succession of votes and declined to put Hawkins and Walker on the Nov. 3 ballot — with Republicans voting to add the Green Party to the ballot and Democrats opposed.

Two weeks later, the Green Party appealed the gridlocked decision to the state Supreme Court, which quickly directed election clerks across the state to hold off printing or sending out absentee ballots until it could look into the issues and collect more information.

Surely, the high court with its 4-3 conservative majority would Elections Commission and order the Green Party candidates to be put on the ballot?

But, no. Stampeded by the thoughts of delaying the mailing of absentee/early ballots, the Supreme Court did not even look at the merits of the case and instead denied the Green Party, faulting it for not filing its petition earlier and concluding "there is insufficient time for this court to grant petitioners any relief that would not also be likely to cause enormous chaos in the election process …"

The surprise 4-3 vote came after Justice Brian Hagedorn, a former legal counsel to then Gov. Scott Walker, voted with liberals. The ruling drew wrath from other high court justices who said the Elections Commission had acted unlawfully and suppressed the rights of voters to choose Green Party candidates.

"Today this court abdicates it's responsibility to correct ballot error and does so without explaining its reasoning in a full legal opinion," one dissent said, "Instead, the court issues a perfunctory order in perhaps one of the most important cases in a judicial lifetime."

Another dissent dismissed the high court majority's "made-up standard of 'it is too late' in order to deny ballot access and limit voter choice" and noted that the high court had previously directed that Ralph Nader and Peter Camejo be added to the November ballot on Sept. 30, 2004, "notably weeks later than what the court here considers too late."

The byzantine actions of the Wisconsin Elections Commission point to the need for reform and a less political makeup. We get no justice, fairness or equity in our elections when partisan commissioners are focused on the political end-game. The high court only compounded the dysfunction of the Elections Commission by being stamped into a hasty decision.

The Green Party never got its day in court — either before the commission or the high court. That is a travesty and an affront to all voters in the state.

We can only hope there is a clear winner in the November elections in the state — otherwise Wisconsin's actions may be revisited and held up to withering scrutiny before the rest of the country.