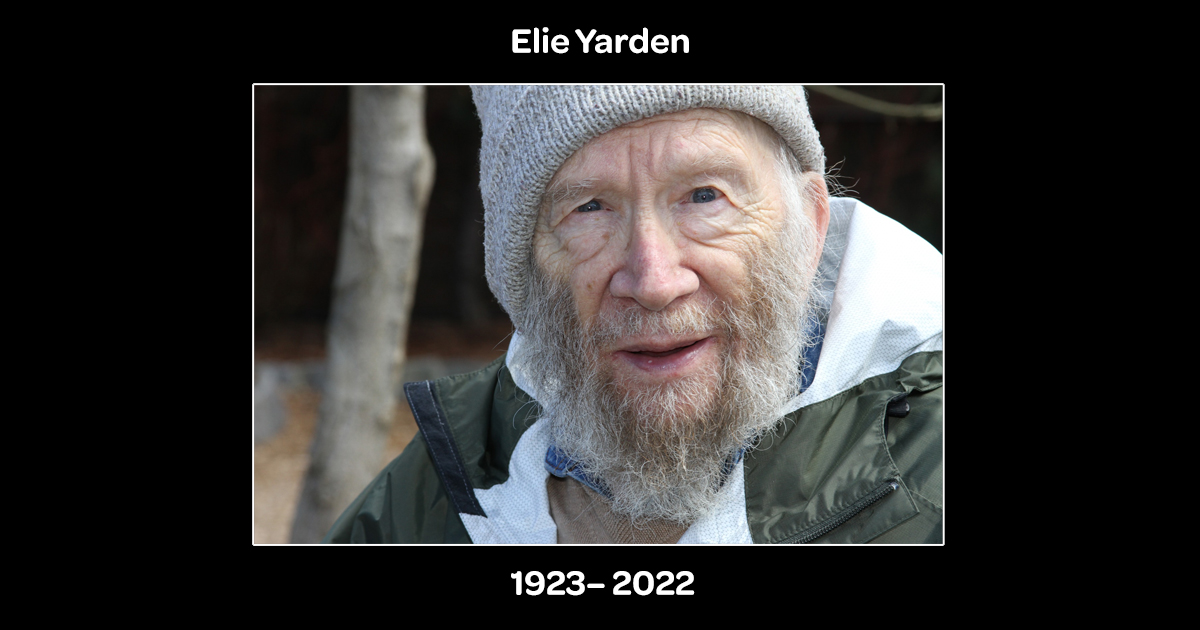 Samuel Elie Yarden died on September 5, 2022 at the age of 99. Elie was surrounded by family at home in Cambridge, Massachusetts. Over the course of his long life he was many things to many people. He was a lover, spouse, father, teacher, composer, traveler, mentor, cook, and a resistor. He had an unquenchable thirst for inquiry and knowledge. He was an activist, a community organizer, a believer in individual autonomy and interdependence, and he abhorred prejudice in any form.

Elie was born on June 7, 1923 to Rachel and Hanan (Brofman) Yarden in Philadelphia. He grew up, with his younger brother Urie, in the midst of an extended Brofman family, immigrant Jews from Moldova. His family was one of entrepreneurs and intellectuals. They were survivors of the pogroms who prized freedom and self-empowerment. He studied violin and piano while his father taught Talmud and his mother pursued a PhD in Romance Languages.

Elie recalled a boyhood filled with books, movies, visits to his uncle’s Atlantic City teahouse, and summers in the utopian community of Vineland, New Jersey. His memory was exceptional and is detailed in more than forty chapters of personal memoir that he left for those who might gain useful knowledge from it.

From youth, Elie’s life was filled with culture and politics. Elie and his family were active in Hashomer Hatzair, Socialist Zionism and founding a homeland in Palestine for Jews escaping anti-semitism in Europe. As a teenager, he studied piano and composition at The Settlement School in Philadelphia with Stefan Wolpe. During high school he moved with his family to Venice, California and began college at UCLA studying engineering. He worked at Douglas Aircraft building naval dive bombers for the Pacific fleet and in February 1943 he enlisted into the US Army Signal Corps at Camp Swift. Upon discharge he studied Near Eastern languages at the University of Chicago, but was encouraged to resume his music study and transferred to the University of Pennsylvania. Elie graduated high school at age 16 but never graduated from college.

Elie moved to New York City in 1950 where he pursued his music career while making many lifelong friends. His completed compositions include string quartets, pieces for piano, small ensembles, opera, and an orchestral work. He shared apartments with poets, artists and actors including Elaine May, Gerrit Lansing and Rose Piper. He worked with The Living Theater, hung out at Ratner’s and navigated the Beatnik happenings of Greenwich Village. He was introduced to Nona Baird by his neighbor, Nona’s mother, Mara Koehler and they soon moved in together, beginning a relationship and marriage that lasted over 65 years until Nona’s death on January 9, 2020.

Nona and Elie traveled the United States, marrying in 1956, living for a time in Crescent City, California, before traveling to Europe where they rode bikes through England, France and Italy. They ended their trip in Jerusalem in 1958 with a visit to Elie’s parents and chose to remain in Israel where Elie secured work as a professor of music at the Hebrew University of Jerusalem and later at Tel Aviv University. Nona gave birth to their first son Tal, and two years later, after moving to Tel Aviv, to their second son, Guy.

Elie returned to New York City with his family in 1965 where he worked various night jobs while composing music. He began working with experimental sound synthesis at Bell Labs with Milton Babbitt and others, and reconnected with colleagues from his youth. In 1967 the family moved to Bard College, where Elie taught music and humanities for over 30 years. He helped to build the music department there, bringing in such notable contemporary composers as Benjamin Boretz, Joan Tower and Roswell Rudd, and later was instrumental in creating Bard’s groundbreaking low-residency MFA program. Their third son, Seth, was born and they built a home that was open to an extraordinary community of artists, students and teachers, who gathered frequently to share in the work of activism, love, learning, and food. During this time, Elie and Nona developed lifelong relationships with the artist Gale Sasson and the poet Timotha Doane.

After retirement from Bard College, Elie joined Nona in Cambridge, Massachusetts, where she had moved to restart her own career, and they settled into a new home in the Cambridgeport neighborhood. Elie spent many years building community with his neighbors there, working on issues of fair and equitable housing, city zoning, and environmental concerns. He was an active member of the Green-Rainbow Party where he participated in writing the party’s platform and advocated for social and environmental justice. He was an admirer of local activists Mel King and Chuck Turner. Elie and Nona’s home was often a place for gathering and working on civic matters. Elie attended council meetings regularly, and at the age of 90, ran for Cambridge City Council. Throughout this time, Elie and Nona enjoyed friendships and community with many artists and poets in the town of Gloucester, where their close friend Gerrit Lansing lived.

Elie and Nona welcomed their sons’ partners and grandchildren into their lives and are survived by a genetic family and a family of choice: their sons Tal, Guy and Seth, Tal’s son Fox Ivo Yarden, Seth’s wife Tomoko Terashita and their sons Yosuke and Akira, Elie’s niece Julia Yarden, Nona’s niece Freedom Baird, Nona’s brother Ian, and their longtime friends and lovers Gale Sasson, and Timotha Doane, who was with them at the time of their deaths.

Elie Yarden was abundant and magical in his love for life, and in his sharing of it with those around him. His gifts to many will live on.