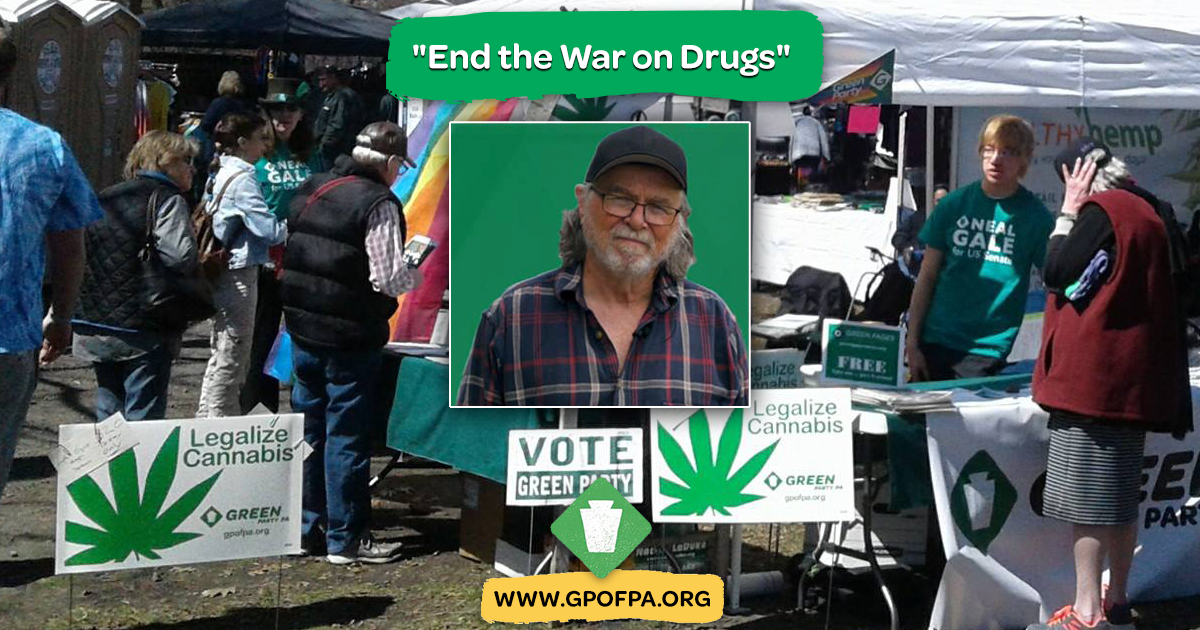 Today, Michael Bagdes-Canning, the Green Party candidate for Lt. Governor of PA, has called for an end to the War On Drugs. In a conversation at his home in Cherry Valley, PA, Bagdes-Canning told voters:

The War on Drugs is more than 50 years old, and it is America’s longest war. Like other wars, it has diverted trillions of dollars from our communities, militarized our police departments, claimed thousands of lives, decimated communities, and, largely, been waged in poor and working-class neighborhoods.

Like other wars before it, the War on Drugs was built on a series of policy lies and decisions that perpetuated white supremacy, racism, and xenophobia. It was racist in intent and implementation. As demonstrated in numerous studies, our criminal justice system has been weaponized against communities of color, with far reaching consequences for their residents. The War on Drugs has created suffering on an unimaginable scale, with no discernible benefit. Despite the trillions of dollars spent, drug overdose rates have exploded – from 6.1 per 100,000 in 1999 to 21.6 in 2021.

What would I advocate? Well, I like the recommendations found in the Green Party Platform:

First of all, PA should adopt a system of treatment rather than incarceration, similar to Portugal. We should redirect funds presently budgeted for the War on Drugs toward research, education, prevention, and treatment. Treatment and legalization have a track record which shows just how shameful the half-century long War on Drugs has been.

Second, PA should legalize possession, sale, and cultivation of cannabis/marijuana.

Third, PA should grant amnesty and release from confinement without any further parole or probation, those who have been incarcerated for the use, sale, or cultivation of marijuana, and who otherwise are without convictions for victim-oriented crimes. Provide the option for drug treatment to those leaving confinement. All felony charges related to convictions for marijuana possession should be stricken from a person’s record.

Fourth, Congress should amend the Controlled Substances Act to reflect that drug use, in itself, is not a crime, and that persons living in the U.S. who are arrested for using drugs should not be incarcerated with those who have committed victim-oriented crimes.

Fifth, PA should reform our criminal justice system, acknowledging that it has, for centuries, been used as a tool of oppression. Therefore, we should invest in the communities that have been ravaged in this unjust war.

If the War on Drugs were an actual armed conflict, the generals would have been fired and the war called off. The War on Drugs was misguided from its beginning. We’ve lost this war. It’s time to declare a peace, time to rebuild communities.

If you would like to join Michael Bagdes-Canning’s campaign for PA Lt. Governor, please contact [email protected].