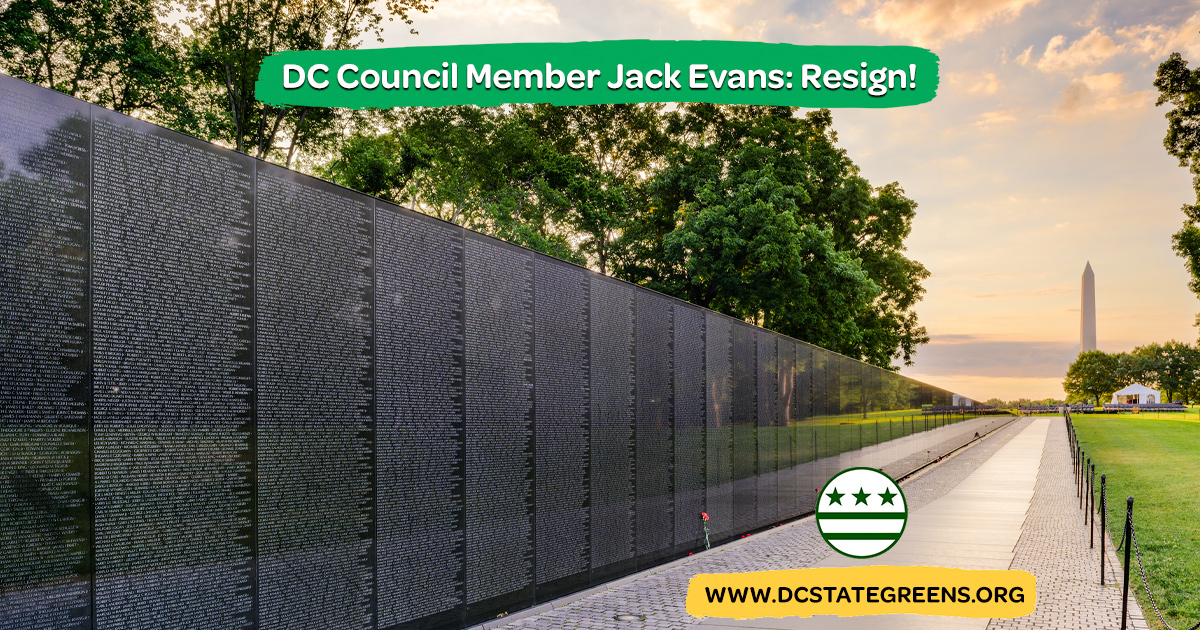 Washington, DC -- The DC Statehood Green Party is urging Washington, DC Ward 2 Council Member Jack Evans to resign from his seat immediately. Party members said that, over the course of his tenure, Evans has abused the prestige of the office for personal gain and has a sordid history of engaging in questionable activities that warrant scrutiny.

While Council Members can hold additional jobs, the Rules of Organization and Procedure for the Council of the District of Columbia, R. 202(a) states that "Council members and staff shall maintain a high level of ethical conduct in connection with the performance of their official duties and shall refrain from taking, ordering, or participating in any official action that would adversely affect the confidence of the public and the integrity of the District government."

As reported in the Washington Post (3/2/2019), Evans and his staff repeatedly used his DC Council e-mail account for private gain by soliciting law firms that were concurrently lobbying the DC government.

DC Statehood Greens noted that, in addition to the recent events, Evans has a long history of repeatedly pushing the boundaries of principled conduct, including his actions to promote legislation in 2016 that would have benefited Digi Media Communications, LLC, a digital sign company from which he had received money and stock (both of which he claims were returned) and solicited a paid internship for one of his children.

In addition, Evans urged the Public Service Commission to approve a merger between Exelon and Pepco without disclosing his ties to Exelon's lobbying firm.

Evans has contributed to eroding the public's trust by successfully overturning voters' decisions for term limits and Initiative 77 (to increase wages for tipped workers), as well as abusing his constituency funds and PACs.

Based on the public disclosures available regarding the most recent incident, Evans has repeatedly undertaken acts of willful misconduct that violate the DC Council's Code of Conduct and greatly erode the public trust.

A fuller and deeper examination of his conduct has yet to be revealed, but Statehood Green Party members said these acts alone warrant his immediate resignation or removal from the legislative body as a whole, or at minimum, immediate removal from any and all Council committees and censure.