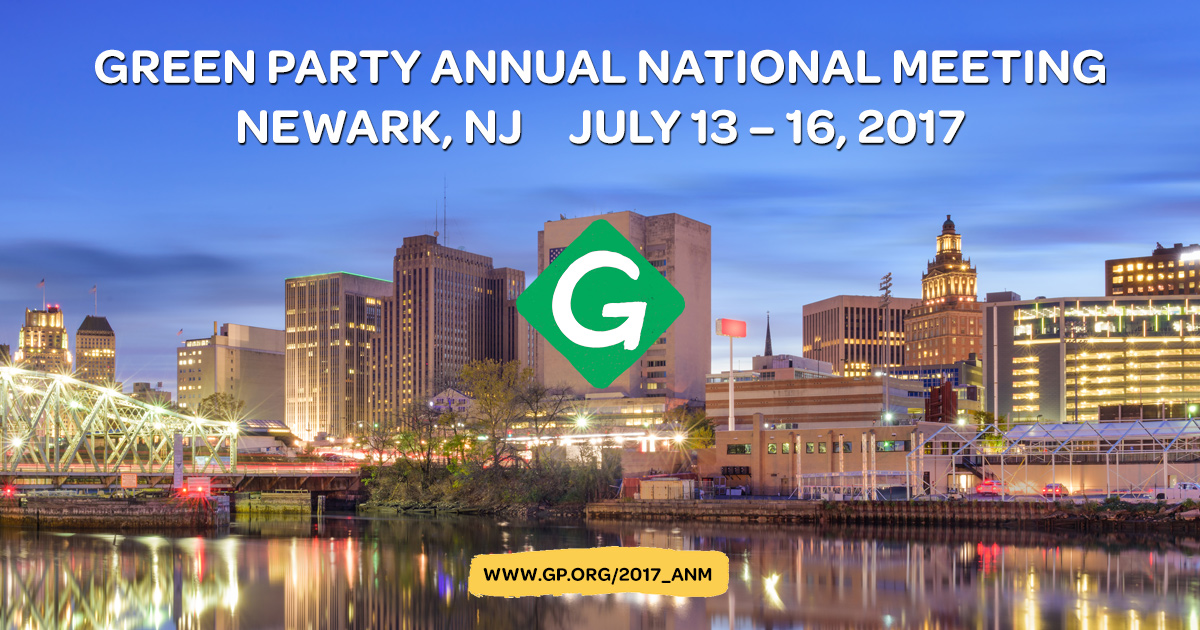 WASHINGTON, D.C. -- The Green Party will hold several events for news media during its 2017 Annual National Meeting in Newark, New Jersey, from July 13 to 16.

Greens will convene at the New Jersey Institute of Technology in Newark. The 2017 meeting will feature Green Party panels, workshops, meetings of the Green National Committee, and other events.

The Green Party encourages reporters to meet and interview Green candidates, elected officials, activists, and leaders during the meeting. See below for a schedule of press conferences and other special events open to the media.

On Thursday, July 6, one week before the meeting in Newark, the Green Party will air a half-hour livestream show ("GreenStream"). The show will feature Green candidates running for public office in New Jersey and one of the Annual National Meeting organizers and begins at 9 p.m. ET.

The GreenStream show can be viewed online on the Green Party's Facebook page.

Among the GreenStream interviewees will be Seth Kaper-Dale, the Green Party's candidate for Governor of New Jersey, which is one of two states with a gubernatorial race in 2017. Mr. Kaper-Dale is obliged to raise $460,000 by Aug. 31 to qualify for the gubernatorial debates and receive a 2:1 match in funding. The amount of campaign funds raised is the sole criterion for participation.

Mr. Kaper-Dale is a pastor and migrants' rights advocate who has worked to prevent the deportation of Indonesian migrants for over a decade, in the wake of the 9/11 attacks.

The host will be James Lane, Green candidate for Public Advocate of New York City. Hillary Kane will speak for the party's Annual National Meeting Committee.

The meeting in Newark is open to the media and public. A credentialing page for reporters, bloggers, and other members of the media interested in covering the meeting will be posted online soon.

Information on registration for the convention and housing reservations can be found at http://www.gp.org/2017_anm_registration.

SCHEDULE OF EVENTS for News Media at the Green Party's Annual National Meeting (tentative and subject to change; names of the press conference speakers to be announced)

A tentative schedule of all events at the meeting is online here.