Major wins behind us, exciting struggles ahead! 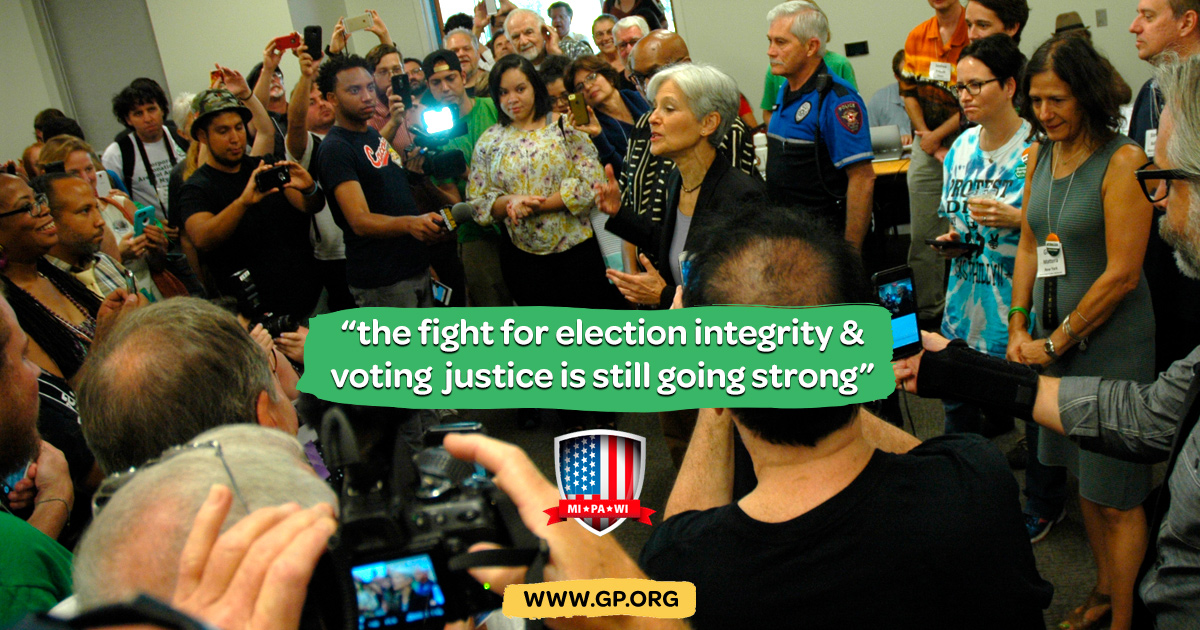 More than two years after the groundswell demanding recounts in the 2016 election, the fight for election integrity and voting justice is still going strong. To keep you up to date on our work, made possible by the generous support of recount contributors, here are some exciting developments in the continuing struggle on the front lines.

Counties across PA are updating their voting systems as required by our legal settlement mandating 100% paper ballots by 2020. The agreement also calls for urgently-needed robust election audits by 2022. Our 2016 Recount team is represented on boards overseeing the implementation of these decisions by renowned expert Dr. J. Alex Halderman, and Mark Lindemann, Senior Science and Technology Policy Officer of Verified Voting.

Grassroots activists are playing a critical role in watchdogging local officials, who choose the new systems. Activists are warning against a “hybrid” ballot marking device that can be hacked to print a ballot that’s different from the vote it records, the ES&S Expressvote XL. Philadelphia city commissioners recently discarded advice from community groups and purchased this system. We must turn up our volume and hold officials accountable! (More on ballot-marking devices below.) This article has more on upgrading PA’s obsolete systems.

In WI, we continue to prevail against legal maneuvering by voting machine corporations attempting to block scrutiny of their software. We have also won rulings that block their effort to impose a gag rule that would have prevented us from publicly disclosing what we find in our upcoming software investigation. How can we trust our elections if critical software, controlled by private corporations, is shielded from scrutiny? Details on our latest legal battles in WI are here.

Before the recount effort in Michigan was shut down by the courts, it was already uncovering major problems, particularly in communities of color like Detroit, where more than 80 ballot scanners broke down on election day, and a whopping 60% of precincts were ruled ineligible for recounting due to problems with the initial count. Now, grassroots activists are working to get Detroit’s new Charter Revision Commission to improve election integrity and oversight of the voting process.  For details and info on how Detroit residents can get involved, go here.

Anti-democratic roadblocks to recounts still in place. Headaches ahead in 2020.

This excellent article by Steven Rosenfeld gives an overview of why the threats to secure, accurate and just elections remain and are likely to produce “recount headaches" in many 2020 swing states. The anti-democratic roadblocks that prevented meaningful recounts in 2016 remain largely in place, with the exception of PA’s paper ballots required by the recount lawsuit settlement. So the fight for elections we can trust continues!

The national trend is growing to ban unverifiable “black box” paperless voting machines. However, the same handful of corporations behind those paperless machines are now pushing flawed replacements. There is growing controversy around the spread of “Ballot Marking Devices” (BMDs) that print a “paper ballot” after voters make their choices on a touchscreen or other interface. Of greatest concern are “hybrid” machines that both mark the paper ballots and scan them - potentially without the voter even seeing their paper ballot. This is very troubling as many states and counties are rushing to purchase these machines.

Read more about Ballot Marking Devices and what you can do to help ensure that election officials acquire voting systems we can trust.

Ranked Choice Voting in NYC & beyond

The momentum to bring Ranked Choice Voting to our elections is growing. At recent NYC Charter Commission hearings, advocates showed up in force, calling for RCV for NYC.

RCV opens up choice at a time Americans are hungry for it. RCV lets you rank your choices instead of voting for just one candidate. If your first choice loses, your vote is automatically re-assigned to your second choice. This makes it impossible to “split the vote” or “spoil the election” and ensures the winner has majority support. It brings more voices and viewpoints into our elections, and makes ”lesser evil” voting obsolete.

Find out how you can bring RCV to your city, state, county or college, atFairvote and Voter Choice Massachusetts.

Thank you for all you’re doing to grow our movement for election protection and voting justice.

It’s in our hands!