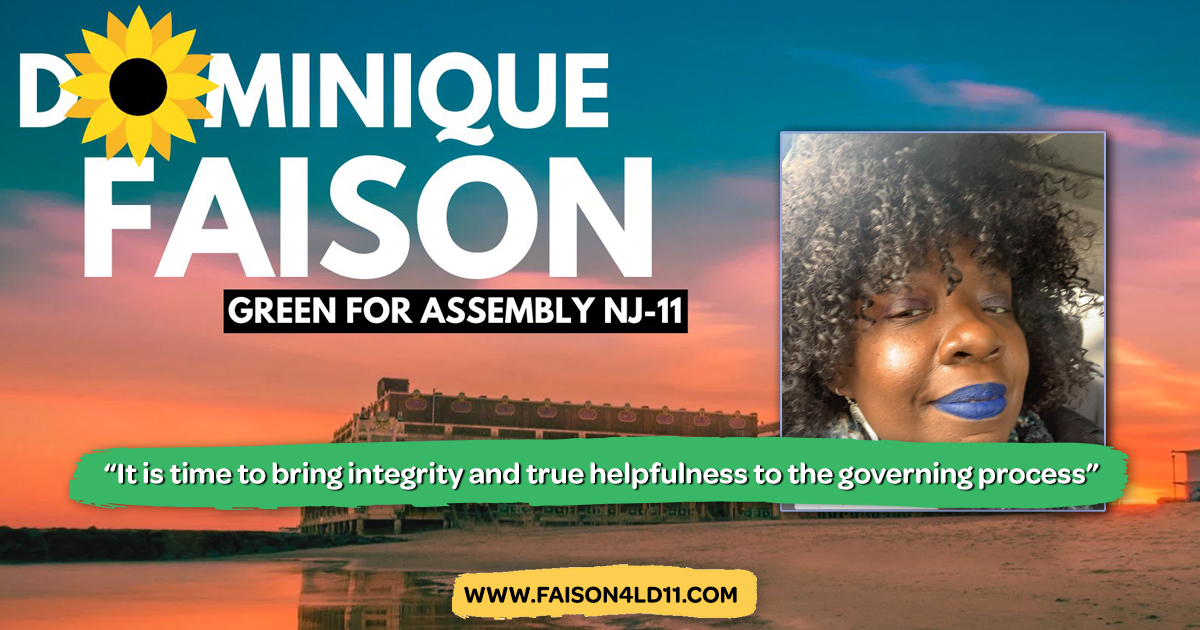 ASBURY PARK, NJ – Dominique Faison is no stranger to adversity and challenges in her life. Whether it was losing her mother as a teenager, being homeless with five children, or seeing her children endure the death of their father to COVID, Dominique has displayed an extraordinary level of resilience and strength to be at her best, not just for herself, but for the people around her. Faison, a 47-year old political newcomer from Asbury Park, is making her case in the last weekend in her campaign for New Jersey General Assembly in the Eleventh District. The mother of nine children and grandmother to five, is running under the Green Party flag for one of the two open seats currently held by Democrats.

"Let's face it, whether you vote for a Democrat or Republican, nothing ever changes," declares Faison. "We have serious problems facing our communities right now and it's time to stop voting in politicians who care more about the money and not about the people." Faison has identified a few core issues during the course of her campaign: solving homelessness, raising the standard on government accountability, standing against Gentrification where local residents are being driven out of their communities rather than being brought in to help improve conditions, and overall quality of life for all people, which includes wages and health care. Faison has been using her own personal experiences to show voters she is the true choice people have to enact change in Trenton.

Even as a young child, Dominique saw the struggles her mother faced trying to make ends meet to support their family. After her mother passed away, Dominique's grandparents took on the responsibility to raise their four grandchildren. These experiences showed the stigma associated with poverty and the real struggle of acquiring the basic needs. "I saw my grandmother work until she was seventy years old," recalls Faison. "We need a better system where people can enjoy and not work their entire life away." These personal experiences have been the cornerstone for the focus on quality of life issues throughout the campaign. Dominique has a firm belief no one is greater than anyone else because of their material wealth—a true testament to the strong people she has had in her life.

More recently, Dominique found herself as a working mom while being homeless with children. "I saw, firsthand, the inadequacy and problems while trying to access the 'social safety nets' that are supposed to be available for people who need them," says Faison. "I tried to contact the Housing Secretary regarding programs and didn't even get a response back from anyone in the department." This experience showed Faison the realities of families falling through the cracks of the system. "It is simply wrong that working families find themselves in a situation where they need help ... and can't get it from programs their tax money pays for," declares Faison. "Now, with the Pandemic causing more economic problems for families, we need a government that is ready to help people."

Faison is seeking to propose solutions to the homelessness issue that are multi-faceted. Some of the solutions include the building of tiny home communities, repurposing abandoned buildings, and assisting people with the trickle down effects of homelessness. "The mental health toll homelessness takes on people is absolutely devastating ... especially on children," says Faison. "We need to ensure families are getting the assistance they need in order to stop the 'school to prison pipeline' ... and give them a chance to turn their situation around."

Dominique is seeking to challenge the status quo in Trenton—she goes back to her past to put it together. "I grew up with a strong-Democratic influence with my grandparents," Faison remembers. "It didn't matter if the Democrats or the Republicans were in office, my grandparents would complain about the same things ... that cycle has to be broken." Some of the more recent actions by the state government (including direct payments and passing a budget within minutes of it being introduced) has Faison questioning the system's true intentions. "You have to start thinking ... are they helping us or playing us ..." Faison questions. "It is time to bring integrity and true helpfulness to the governing process."

Over the past few months, the Green Party candidate has discussed her plans on combatting homelessness and housing discrimination, as well as bringing integrity back into government by reinforcing that government is meant to serve the people… not itself. "It is important for everyone to realize our freedom isn't up for debate ... it's an absolute," Faison emphasizes.

To learn more about the campaign, please visit faison4ld11.com. The campaign can be reached for further comment at [email protected].