The False Promise of Carbon Capture, Public Power, and the Green New Deal 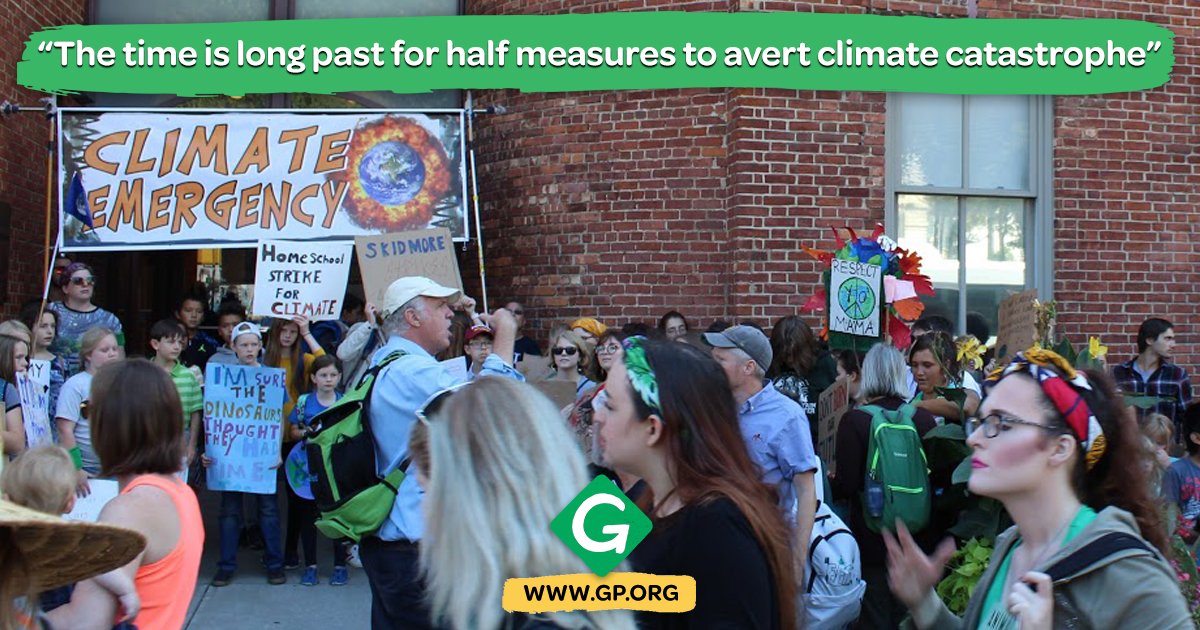 ALBANY, NY – Starting at 12:15 p.m. today on the corner of Washington Ave. and Dove St. citizens will protest the late and slow legislative process that is addressing climate collapse. The protesters will stand with signs and voice concerns about Congressmember Tonko’s CLEAN Future Act. This bill defines new fossil fuel infrastructure and waste incineration as ‘clean’ energy solutions. As long as we continue to pour megatons of greenhouse gasses into the atmosphere then all the beneficial programs in the world won’t keep us from crossing the tipping point into irreversible climate breakdown. Congressmember Tonko is ignoring this fact and continues to operate at a gradual pace.

We are lucky to have Dr. Peter LaVenia as our guest speakers today. Dr. LaVenia is the Co-Chair of the Green Party of New York. He is a former organizer for Ralph Nader, and has long been an advocate for an eco-socialist Green New Deal.

The scientific community has been sounding the alarm about the climate crisis for years and some progress has been made. However time is short before the planet slips into an irreversible warming trajectory no matter what humans do. The clock in Union Square, NYC, shows we have about 7 years before we use up our global CO2 budget. Carbon Brief says there are 9 tipping points, any of which could push us into run away climate change. The US is still the world’s superpower. What we do about climate collapse is a precedent for the rest of the world. From the year 2000 - 2019 US greenhouse gas emissions have increased by 2%. Our large population and consumptive lifestyle makes us the number 2 emitter in the world.

Peter LaVenia, Co-Chair of the Green Party of New York state “The time is long past for half measures to avert climate catastrophe. We need a strong, eco-socialist Green New Deal that combines phasing out greenhouse gas emissions and 100% clean renewable energy by 2030 with a Just Transition that benefits the working class and promotes public ownership rather than private profit. Paul Tonko’s sponsorship of bills that promote incineration and greenwashing along with his refusal to push for phasing out greenhouse gas emissions sooner than 2030 show that he does not take this extinction-level threat seriously.”

Eric Weltman of Food & Water Watch adds "The time for real action on climate change must be now — we simply have no time to waste on false solutions like biogas and nuclear. If we are to make a true commitment to future generations and to our planet, we must act boldly and immediately to keep all fossil fuels in the ground and move toward true renewable energy sources like wind and solar. Representative Tonko must listen to his constituents and support a future without fossil fuels, including co-sponsoring the End Polluter Welfare Act.”

Mark Dunlea of the Green Education and Legal Fund remarks “Time is running out to avoid a climate catastrophe that threatens the future of life on our planet. We need to end greenhouse emissions within a decade, not push for weak goals like net zero that allows fossil fuels to continue to be burnt. We need Congressman Tonko to stand up to the fossil fuel companies and others who are contributing to climate change, not promote false solutions like carbon capture technology and garbage incineration.”

Barbara Spink and Kevin Conley are co-chairs of the Capital Region Interfaith Creation Care Coalition, a group with members from over 20 different faith groups in our area. They both believe that “The Clean Future Act is a step in the right direction but is too tentative. It is not right for us to be so cavalier about our children's futures. We need to take BOLD action now. We need to phase-out fracked gas and other fossil fuels and subsidize only solar, wind and hydropower. It is not only dangerous to dither any longer on climate change at this late date, but it is a moral imperative to act now for future generations and other species that share this planet with us.”

Sandy Steubing from PAUSE summarizes “We’re out of time. Our government officials have dallied for too long thus incrementalism won’t get the job done. Nor will heading in the wrong direction with the pursuance of new fossil fuel infrastructure, waste incineration, and continued fossil fuel exports that are in Congressmember Tonko’s CLEAN Future Act.

PAUSE, GELF, and Food & Water Watch understand that persistence is needed to influence politicians. We will be on Congressman Tonko’s office steps every Tuesday throughout the summer because nothing less than the future of life on earth is at stake.