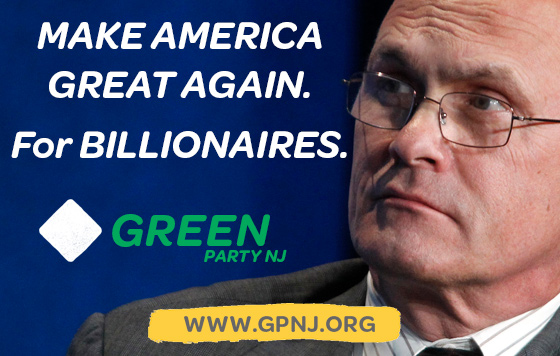 Parsippany, NJ –  I along with the rest of the members of the Green Party of New Jersey find the appointment of Andrew Pudzer to the position of Labor Secretary by president-elect Donald Trump to be reprehensible. Pudzer as CEO of the CKE Resturants, the parent company of Hardees's & Carl's Jr., has been critical of raising the federal minimum wage; opposes the Labor Department rule that would make more workers eligible for overtime pay; has been critical of paid sick leave, and is an outspoken proponent of automation that has promised to automate his chains everywhere the minimum wage has been raised.

President-elect Trump has repeatedly said he supports American workers and the saving if American jobs but with this appointment is anathema to those promises no matter how hollow they were to begin with. The Dept of Labor, in 60% of its investigations of CKE restaurants and franchises were found to have violated wage and hours laws. Having an Anti-Labor Secretary would be bad for American workers.

Greens around the country oppose the appointment of Andrew Pudzer, not only because of the reasons stated above but for also the massive conflicts of interests. A Pudzer led Labor Department would also be in charge of investigating employers, which includes his company-owned and franchised stores, for labor violations. Who's side are American workers suppose to believe he would be on?

I believe that this appointee would go against what according to U.S. Code title 29 chapter 12 part 551 states the Labor Department was created for – " to foster, promote, and develop the welfare of wage earners of the United States, to improve their working conditions, and to advance their opportunities for profitable employment." President-elect Trump promises to "Make America Great Again", with the appointment of Andrew Pudzer for Labor Secretary, we now know that the promise was being made to his multi-millionaire and billionaire friends. One thing that's for certain, is that Greens and their allies in the Garden State, will continue to fight for a $15 minimum wage & other actions to improve the lives of New Jersey's working families.