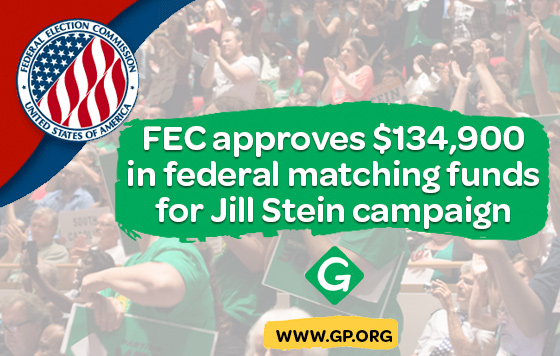 WASHINGTON, January 13, 2017 – The Federal Election Commission has certified a payment of $134,900 in federal matching funds to Jill Stein for President in connection with the 2016 presidential primary election. The certified amount was in response to a submission for matching funds made by Stein, the Green Party's presidential candidate for 2016.

To become eligible for matching funds, candidates must raise a threshold amount of $100,000 by collecting $5,000 in 20 different states in amounts no greater than $250 from any individual. Other requirements to be declared eligible include agreeing to an overall spending limit, abiding by spending limits in each state, using public funds only for legitimate campaign-related expenses, keeping financial records and permitting an extensive campaign audit.

Based on Commission certification of Jill Stein for President’s initial threshold submission for matching funds in March and the Committee’s three regular submissions in May, June, and October, the United States Treasury made four payments totaling $456,035.39 to the campaign. The Commission has requested that the U.S. Treasury make a fifth payment of $134,900, bringing the total certified amount for Stein's committee to $590,935.39.

Materials included with Jill Stein for President’s submission may be viewed here.

Once declared eligible, campaigns may submit additional contributions for matching funds on the first business day of every month. The maximum amount a primary candidate could receive is currently estimated to be about $48.01 million.

The presidential public funding program is financed through the $3 check-off that appears on individual income tax returns. The program now has two elements: matching payments to participating candidates during the primary campaign and grants available to nominees to pay for the general election campaign. On April 3, 2014, President Barack Obama signed legislation to end the public funding of presidential nomination conventions.

The Federal Election Commission (FEC) is an independent regulatory agency that administers and enforces federal campaign finance laws. The FEC has jurisdiction over the financing of campaigns for the U.S. House of Representatives, the U.S. Senate, the Presidency and the Vice Presidency. Established in 1975, the FEC is composed of six Commissioners who are nominated by the President and confirmed by the U.S. Senate.