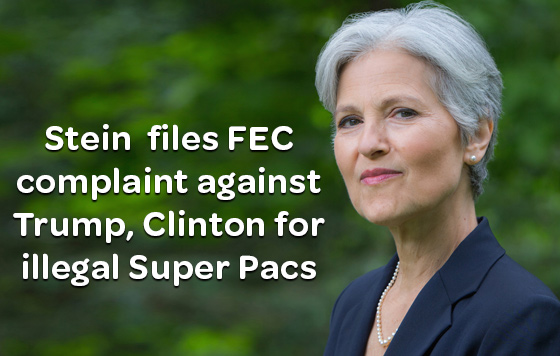 Under current FEC regulations, Super PACs, known technically as "independent expenditure-only committees" and colloquially as "dark-money groups," may raise unlimited sums of money from corporations, unions, and individuals, but are not permitted to contribute to or coordinate directly with parties or candidates. Such coordination would be functionally equivalent to an in-kind donation to the campaign from these dark-money groups.

In her complaint, Stein referred to several instances, revealed through leaked emails and memos, that appeared to show coordination between Hillary Clinton and several Super PACs, including Correct the Record, a Super PAC headed by longtime Clinton ally and former GOP operative David Brock. One section of a July 2015 campaign memo addressed to Hillary Clinton instructed: "Work with CTR [Correct the Record] and DNC [Democratic National Committee] to publicize specific GOP candidate vulnerabilities." Leaked emails also reveal meetings between the campaign and Priorities USA Action, and that campaign officials have helped with the group's fundraising.

Regarding the Trump campaign, two of the candidate's senior staffers formed the Rebuilding America Now Super PAC—almost immediately after leaving the campaign—in violation of FEC rules requiring a 120-day "cooling off" period, intended to keep former staffers from using their knowledge of a campaign's strategy and needs to develop ads for an "independent" group. The complaint also detailed the Trump campaign's dealings with the Mercer family, who has poured millions of dollars into the pro-Trump Super PAC Make America Number 1, and has evidently exerted undue influence in the hiring of senior campaign staffers and the use of data analytics.

"As the one candidate in this race who does not take money from corporations or Super PACs, I am in a unique position to call for the enforcement of election laws, which are already too lax on letting big money influence our political choices," said Dr. Jill Stein, Green Party presidential candidate. As an independent party presidential candidate, Stein may establish what is known as "competitor's standing" to seek enforcement of federal election laws against these violations.

"The ever-increasing amounts of money in politics are a major reason why the establishment parties have become so wildly out of touch with the needs of the American people," added Stein. "We expect to have to resolve this in federal court and are prepared to do so. Filing this complaint against the Trump and Clinton campaigns is just one step towards getting the big money out of politics so we can get the people back in."