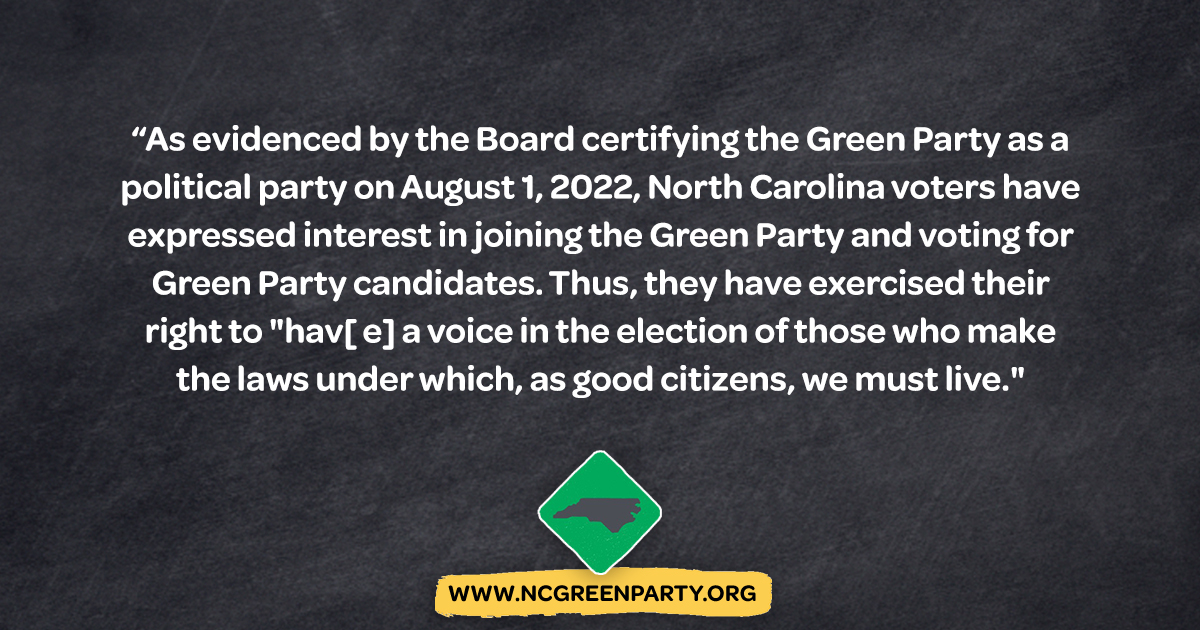 The North Carolina Green Party (ncgp) applauds this afternoon's court order which comprehensively vindicates our party who have only functioned transparently and in full accordance within the statutes of NC law. This important legal victory comes on the heels of unprecedented voter intimidation, harassment and fraud perpetrated by well financed partisan operatives to keep us off the ballot. There is a reason why unaffiliated voters have become the largest voting block in our state. People are dissatisfied with the non-solutions of the politics of fear and division. They are hungry for new ideas and solutions.

We are tired of being corralled into the dead-end politics of fear and cynicism that marks political parties beholden to Wall Street money and corporate interests. We are trying to fundamentally redefine what an American party is and move beyond the era of Coke vs Pepsi politics where voters are presented two unlikable options without much input and then fear-mongered into believing these candidates are owed our vote.

The N.C. Green Party and it dedicated supporters went through extraordinary efforts to collect well over the required signatures for party recognition because we speak to the concerns of millions of voters and our independent voice must be allowed on the ballot this November and beyond.

Eastern NC Federal District Court Judge Dever has ruled in favor of the North Carolina Green Party and ordered the NCSBE to place its candidates on the ballot this November.

Link to ruling document
U.S. District Court
EASTERN DISTRICT OF NORTH CAROLINA
Notice of Electronic Filing
The following transaction was entered on 8/5/2022 at 5:40 PM EDT and filed on 8/5/2022
Case Name: North Carolina Green Party et al v. North Carolina State Board of Elections
Case Number: 5:22-cv-00276-D-BM
Filer:
Document Number: 64
Docket Text:
ORDER - The court CANCELS the hearing scheduled for 1:00 p.m. on August 8, 2022. The court GRANTS the intervenors' motion to intervene [D.E. 15] and DENIES as moot the intervenors' motion to expedite [D.E. 21]. The court GRANTS the NRSC's motion for leave to file as amicus curiae [D.E. 42]. Finally, the court GRANTS IN PART and DENIES IN PART plaintiffs' motion for a preliminary injunction [D.E. 28]. Counsel is reminded to read the order in its entirety for critical deadlines and information. Signed by District Judge James C. Dever III on 8/5/2022. (Edwards, S.)
NC Green Party
www.ncgreenparty.org/
Do you like this post?
Tweet