A first-time politician aims to rock the boat 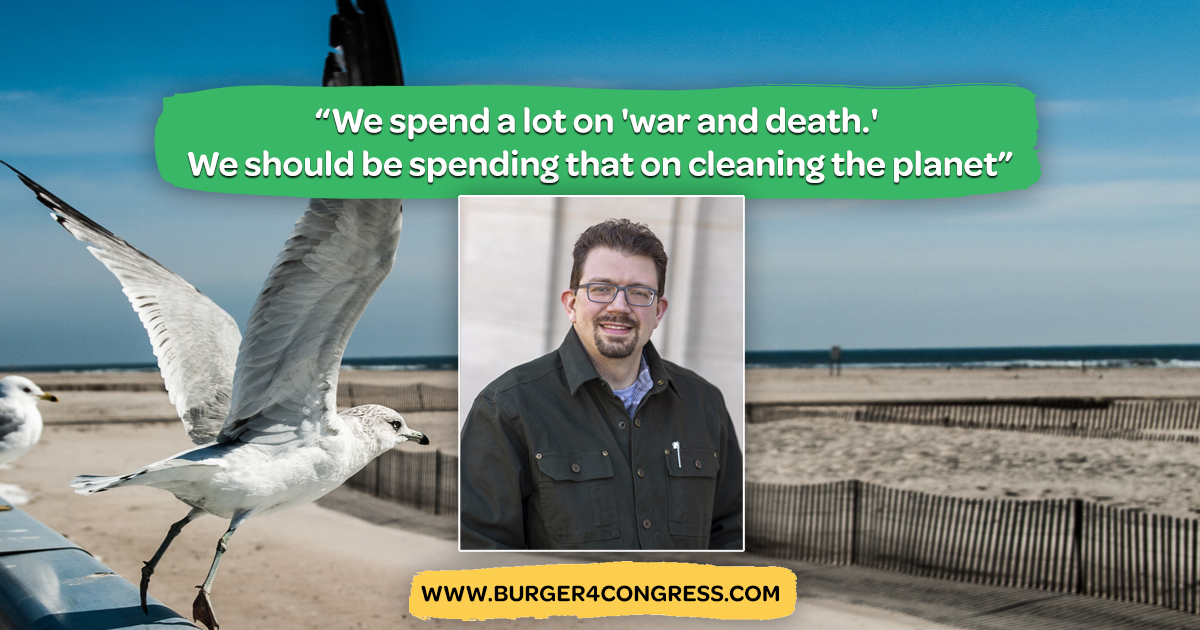 Only 44 days remain until Election Day and only 33 days until the early voting period in Nassau and Suffolk counties. New York's Second Congressional District is electing successor to longtime Republican Rep. Pete King of Seaford. While it is natural that many South Shore Long Islanders will be eyeing the Democratic and Republican sides of the ballot in November, Green Party candidate Harry R. Burger is asking for a second look in his third-party column.

Burger, 37, of Deer Park, is running a different campaign than his Democratic and Republican opponents. He holds different ideals. He has a different background. Maybe most important, this campaign is his first in politics, making him the race's only neophyte.

"I've been active with the Green Party since I found out about them, really 10 or so years ago. I've been a representative for them in the town and have had my name listed as a contact on the site for people in my community," Burger told the Herald last week. "Then, last November, they said that Pete King is retiring, which makes it so that there is no incumbent in the race. The party said if we only put one candidate on a ballot this year, well, this will be our seat of choice."

Soon thereafter, the Green Party of Long Island was looking for members interested in representing their platform in one of the state's most important political seats. After stepping forward to show his interest, the Green Party agreed to back the Huntington native and, in March, Burger was off to collect signatures to officially qualify to have his name listed on the ballot.

Burger is a mechanical engineer by trade, so a pivot into politics may sound strange at first, but he has had a unique interest in serving and leading dating back to his early childhood, when he began learning key values in the scouting movement, starting in first grade.

"Being an Eagle Scout was one of the biggest things to me growing up," Burger said. "I was an adult leader with the [Boy Scouts]. I am the oldest of four brothers and I was still helping out when my younger [brothers] were still a part of it."

He said that when applying for Eagle Scout status as a senior at Walt Whitman High School in Huntington Station, as is customary, he had to write a letter to a congressman for approval. He said at that moment, he became interested in how politics and, more specifically, politicians fulfilled their roles.

"Right then and there I felt, like I do now, like 'Hey, they work for us.' Our government has the final authority, yes, but ultimately the people need to hold them accountable," Burger said. "I feel like that has broken down in the past couple decades on the backs of things like unlimited corporate campaign funding."

After graduating from Walt Whitman High School, Burger attended Rensselaer Polytechnic Institute, in Troy. There, he furthered his interest in service.

"I was in the Army ROTC [Reserve Officers Training Corps] for the first three years of school," Burger said. "I had a choice to make at the beginning of school. I could take an academic or army scholarship, but if I took the army money, until the first day of my third year I could walk out any time but they would stop paying for my college. I ended up staying on the academic scholarship, but I wanted to do everything the ROTC recruits did. Boy Scouts was an amazing help with that."

He said that he didn't want his story to be one of "war and death," and, after graduating with a bachelor's degree in mechanical engineering and science and technology studies, he chose civilian life and pursued his passion for engineering, following in his father's footsteps. Where they differed, though, was in the sector they chose to work in. Burger said he respected his father's decision to work for defense contractors on Long Island when Burger was growing up. Burger's father engineered parts for stealth bombers. Burger conceded that taking these jobs generally resulted in higher pay, on average, and often provided good job stability, but he has declined every offer he has received, and has not regretted it. He holds true to his morality, he said, and he understands that makes him different.

As an adult, Burger was diagnosed as on the autism spectrum. "When I was growing up, it was not as prevalent of a thing and people didn't really understand it," he said. Burger said he wasn't always a polished orator, and he worked diligently through taking classes and working with professionals to become the speaker he is today.

"All of the technical things, the math, science, geometry, they all come to me very easily. Social skills I have had to put a lot more work into," Burger said. "I was the kid getting beaten up in grade school and middle school. I was the nerd, the geek; the one harassed and bullied. I don't want anybody else to have to go through that."

He spoke on learning about historically oppressed groups and wanted to provide solutions -- solutions he believed the "Big Two" political parties cannot or will not provide. Three of his major campaign issues are universal healthcare, taking more urgent preventive measures to slow climate change and cutting military spending in half.

He went on to speak on using public transportation to cut carbon emissions and being more efficient with creating clean energy. He cited the recent widespread wildfires on the U.S. west coast and Australia as like "something you would see in a movie" and that this has to be a wake up call. Lastly, he spoke on healthcare.

"There are over 50 nations that the UN considers developed. There is only one that doesn't have universal healthcare, and we are living in it," Burger said.

He closed the conversation by discussing the differences between his backing and the backing of his political opponents.

"The biggest difference between the Green Party and the Democrats and Republicans is that we do not take any corporate money at all. Period. No ifs, ands or buts," Burger said. "All that money comes from free will donations from real people. It is my interest to defend the interests of the people in my district."