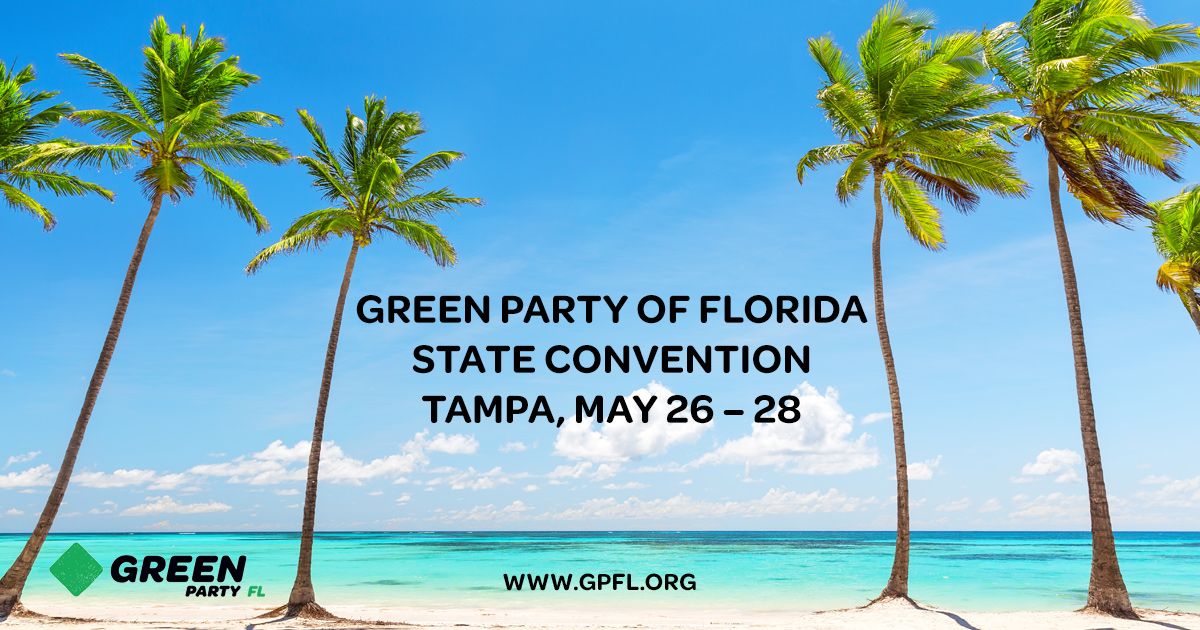 On Saturday we meet at the Robert W. Saunders, Sr. Public Library, 1505 Nebraska Avenue from 10:00 AM to 6:00 PM with speakers and workshops. All are welcome to the events of Friday and Saturday.

These are the offices that will be up for election for the GPFL. They are all for one year terms, except where otherwise noted.

Registered Greens can self-nominate or nominate other Greens to any position. All nominations must be seconded by another Green. Elections will be held at the Peace House on Sunday, May 28th. Time 10 am - 3 PM. Location details are on our website.

Nominations can be made here or via the GPFL Coordinating council or at the state meeting.

For officer positions: Current or past members of state coordinating council recommended but not mandatory.

For national delegates: Current or past delegates, or observers, highly recommended.

Also recommended that members limit themselves to no more than 3 offices or national committees as not to spread themselves too thin.

The goal is to do all that you can to help grow and strengthen our party of common sense and good conscience in the state of Florida and/or nation-wide thereby giving us increased relevance and more elected Greens.

Co-chair of a different gender than male heterosexual ( a 2 year term )
The co-equal co-chairs are responsible for the following:
(1). Providing unifying direction to the State Board of Trustees.
(2). Drafting an agenda and chairing regular meetings of the Board.
(3). Helping the Board to coordinate and achieve its work.
(4). Assisting the Board in coordinating and assisting the work of the State Party committees.

Official Treasurer
Serves as the official treasurer of the Party for the purpose of fulfilling state and federal election law and state corporation law requirements. The treasurer is also responsible for presenting financial reports to the Board of Trustees, State CC and the General Membership Meeting.

Assistant Treasurer
Trains under the official treasurer and also in charge of state fund raising efforts.

Recording Secretary
Maintains the minutes of the Board of Trustees, the minutes State Coordinating Council and the minutes of the meeting(s) of the General Membership. To record and report State CC proposals, votes, and resolutions.
Communications Secretary -Liaison to the state IT team. Has access to GPFL's info.org to maintain party communications between and among the State CC and the various county parties and locals as well as outside inquiries. Keeps track of delegate and local contact information, adds new delegates and contacts the appropriate official state spokespersons for comments or appearances.

Board of Trustees Responsibilities

Serve as the members of the State Executive Committee. Develop a State Party strategic plan (to be approved by the State CC). Do party building. Lead state-wide initiatives, and other such projects as necessary or directed by the State CC. Serve as liaison to the various state committees.

Spokespersons: Represent the GPFL with various media or at functions such as meetings and rallies. One each area.
North Florida
Central Florida
South Florida

3 Alternate delegates
Tasked with voting if a delegate is unable to vote. Should stay informed about the current voting issues on the national list and be prepared to vote within the final 24 hours of a vote should they not see a delegate responding

Members on GPUS Committees and Caucuses:
See www.gp.org for more details. (up to 3 Florida Greens per committee. May volunteer to what ever may be of interest as a voting member or an observer but must be approved by state Greens)