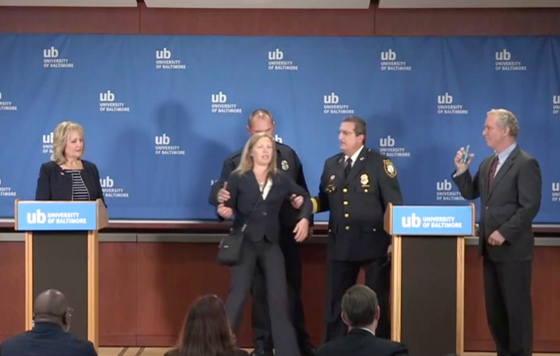 Baltimore, MD - Today, Dr. Margaret Flowers and supporters attended the only televised Maryland Senate debate, held at the University of Baltimore and pre-recorded by WJZ TV. As the debate opened, Kevin Zeese stood up from the audience and asked the Republican and Democratic candidates if they would allow Dr. Flowers to participate. Del. Kathy Szeliga said that she supported Dr. Flowers' inclusion from the start. Congressman Chris Van Hollen was also supportive of her participation.

At that point, Dr. Flowers walked onto the stage and thanked the members for their support. The audience cheered. And Flowers said that she was happy to participate. However, the WJZ anchor asked her to leave the stage. Flowers refused and was removed by police. As she was taken off the stage, Del. Szeliga offered the third podium to Flowers.

"My exclusion means the voters will not know what I stand for and how I compare to the other candidates. While I have obvious differences with Republican views, I also have significant differences with Van Hollen. I am one of only twelve congressional candidates in the nation certified as a clean money candidate[i] while Van Hollen has raised millions of dollars from big business lobbyists on K Street including from the fracking industry, weapons makers and big banks. I call for an Apollo Project to confront climate change and remake our economy into a clean energy economy that would create millions of new jobs while shrinking pollution of our air and water, while Van Hollen relies on the market to fix the problem that they have created. On healthcare, I call for an improved Medicare for all that would cover every person in the United States with comprehensive coverage, no premiums or out-of-pocket costs, Van Hollen calls for minimal reforms despite a 25% increase in premiums. On militarism and foreign conflict, I call for remaking US foreign policy so it favors diplomacy over war and is consistent with international law and human rights, while Van Hollen supports escalation in Syria and Iraq and continued support for Israeli apartheid."

After her removal, several members of the audience stood up to protest her exclusion and were each escorted out by police. The debate proceeded without Dr. Flowers.

Flowers points to advice the United States gives to foreign governments that urges open debates including all candidates. In "Organizing and Producing Debates: An International Guide" the National Democratic Institute recommends up to eight candidates can be included in debates and states that "excluding a number of candidates can open up sponsors to public accusations of discrimination and political bias . . ." The political bias in the United States favors the two big business parties, the Republicans and Democrats, while excluding candidates that do not take money from big business interests.

When the Maryland League of Women Voters was pressed to explain the 15% polling threshold, they placed the blame on WJZ-TV. In an email to a supporter, Ralph Watkins, a Vice President of the Maryland League of Women Voters, wrote, "When co-sponsoring a broadcast forum with limited time available, we recognize that a broadcaster may choose to limit the number of participants based on a desire to cover a wide range of issues while allowing each candidate sufficient time to give a full response." In a time of multiple crises and a race for an open senate seat, it is critical that all valid candidates are included and that the public hears a broad discussion of the issues. Instead of opening the debate, organizers intentionally sought reasons to exclude. Dr. Margaret Flowers explains, "I was initially told that a decision would be made on September 16. At that time I met all of the criteria and would have been invited to participate because there had not been a poll that included me. When the organizers learned that a poll was going to be conducted, they pushed the decision date back to October 14 to see if our campaign would meet the arbitrary 15% threshold that was set by the Maryland League of Women Voters. Given the intentional lack of coverage of my campaign in the commercial media, and without the millions of dollars necessary to gain paid exposure, the 15% threshold is impossible to attain. Conducting polling before the public has been informed of their choices is putting the cart before the horse."

This exclusion is part of a pattern of media preventing the public from hearing the views of smaller, younger political parties. The Baltimore Sun decided from the beginning of Dr. Flowers’ campaign to restrict coverage. When pressed to write an article about the campaign, John Fritze opined that the campaign had no chance of winning and failed to articulate the differences between the Flowers campaign and the Democrats running in the primary. Throughout the year, when the Democratic and Republican candidates fought over who took donations from which PAC or corporation, there was no mention that the Flowers campaign takes no corporate or PAC donations. Following a candidate forum at Montgomery College in September, the Washington Post excluded coverage of Dr. Flowers, only mentioning at the very end of a long article that she was running. On October 7, Kojo Nnamdi, a public radio broadcaster, blocked Flowers from debating the Republican and Democrat opponents.

The Real News is hosting an event, Thursday, October 27 at 7 pm on Facebook Live to answer the debate questions and take questions from viewers. Click here for more information.