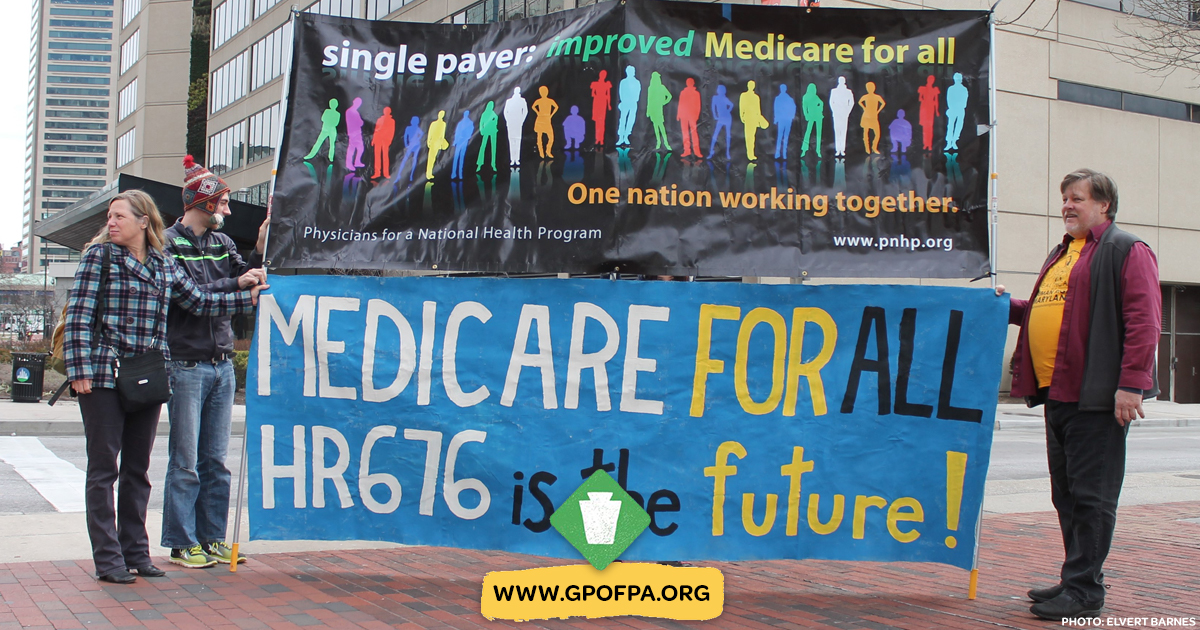 Last week, Leftist Twitter was rocked with a proposal offered by comedian, Jimmy Dore, to send a message to the Democratic leadership that Americans desperately need a national healthcare program. The Affordable Care Act is a policy developed by the rightwing think tank, the Heritage Foundation. It takes the problem in US healthcare, profit-taking, and subsidizes it. This provides a bonanza of public money to the insurance companies, while Americans are left with expensive insurance premiums and high deductibles. Such policy adopted by the mainstream Democrats shows that the party is more interested in defending its corporate funders, rather than the people, and we demand Congress stand up for our citizens.

As a reminder, following the election of President Obama, the Democrats entered 2009 with a majority in the House, a filibuster-proof majority in the Senate and Obama in the White House. Despite this overwhelming majority of the Federal branches, the Democrats did not allow any debate on single payer. It is time we demand that progressives use what little power they may have to fight for a people’s agenda, rather than bow to the corporate contributors that fund the party. The choice is quite clear, either the Democratic Party is with the people, or it’s with big pharma and for-profit health insurance companies.

The response to the Dore proposal has been a heated debate about strategy among Leftists from many organizations, political pundits, and representatives. Some people are concerned that this “performative” vote would be seen as a betrayal and cause the leadership to hold a prejudice towards the Justice Dems when making committee appointments, which would ultimately lock them out of power.

The backlash to the rejection of #ForceTheVote speaks to a common theme of holding our representatives accountable, which Democrats and their media apologists refuse to do. We expect our elected officials to be more concerned with making progress at all costs including the potential of “political suicide.” In all reality, recent polling indicates that a single payer healthcare system is overwhelmingly popular among Americans. There is no reason for this to be controversial, since the necessity and interest crosses party boundaries.

The online grievances in support of forcing the vote are coming from across the country from people who have directly donated money and time to members of the Justice Dems and view this progressive faction as the people who truly represent them over their own district representatives in Congress. This problematic misunderstanding of how we are represented leads to fundraising for popularity over effectively electing progressive legislators in our …own districts. The Green Party encourages voters to support their local progressives for better representation.

This is also an opportunity to point out that the Green Party has a detailed vision of Single- Payer Healthcarethat transfers the greed-driven profit margins and wasteful spending of administration costs by private health insurance corporations to comprehensive full care for the well-being of individuals and families. From conventional doctors to licensed holistic care, providers will be able to truly serve the needs of their community at full capacity. This is crucial for not only Covid-19 sufferers, but for everyone who has been affected by the growing economic despair of job loss (Health Insurance loss) and the emotional ramifications of living in times of morbid instability.

Furthermore, as pointed out in the The Hawkins Healthcare Plan, many changes need to occur to improve and form a successful system for all residents of the US. From comprehensive reform such as community-controlled and elected board members to oversee salaried health care workers to decommodifying all aspects of healthcare, our overall healthcare system should no longer be determined by the fluctuations and instability of a free market.

In a time of crisis, solidarity is crucial. We’d like to thank the people who are standing in the line of fire on this hotbed issue every day. Activists are speaking truth to the power of Congress when asking, simply, “Do the job you were hired by the people to do.” Altogether this is further evidence that the Two-Party system is so entwined with impossible greed and a formidable power structure, that even the most logical, compassionate plea is met with a brick wall. By all worldly and humanistic standards, healthcare is a human right.