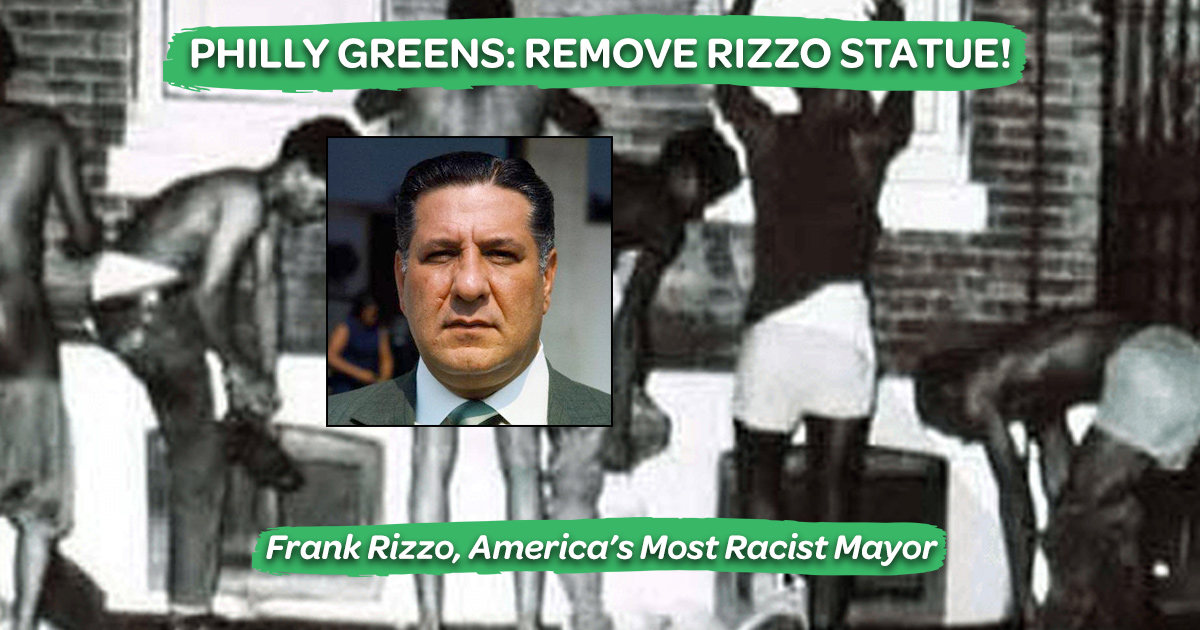 PHILADELPHIA, PA – Earlier this month, white supremacists protested against the removal of a statue of Confederate general Robert E. Lee in Charlottesville, VA, where they killed Heather Heyer and injured dozens of others. These events highlight the urgent need to examine and eradicate racism in our culture and institutions. Therefore, the Green Party of Philadelphia (GPOP) City Committee calls for the removal of the statue of former Mayor Frank Rizzo that stands in front of the Municipal Services Building.

First and foremost, the Green Party salutes Philly REAL Justice, a Black-led coalition for racial, economic, and legal justice for communities of color, which has been organizing the effort to remove the Rizzo statue for quite some time. We offer Philly REAL Justice our admiration and our solidarity in the campaign to remove Rizzo's statue.

Not all white supremacists wear white hoods or Confederate uniforms. Frank Rizzo, who served as Philadelphia's police commissioner (1968-71) and mayor (1972-80), used his power to inflict terror and violence upon the African American community, as well as the LGBTQ community and others.

Among his many actions, he ordered police raids of the offices of SNCC, strip-searched members of the Black Panther Party in front of news cameras, and ordered police to attack a group of black students who were peacefully protesting for a black history curriculum. In 1980, the U.S. Department of Justice even sued Philadelphia for police conduct that included "physical abuse, unlawful use of deadly force and disciplinary procedures which condoned abuse." In 1978, Rizzo explicitly urged people to "vote white" to change the City Charter so he could seek a third term as mayor. As long as his statue stands in front of the Municipal Services Building, the city gives its approval to Rizzo's words and actions.

Rizzo's legacy of racism and brutality remains alive and well in Philadelphia today. Between 2007 and 2013, police in Philadelphia killed people at a rate six times greater than in New York City; 81% of their victims were African American. Furthermore, 80% of stop-and-frisks, made without reasonable suspicion in Philadelphia, are made against people of color. These are injustices that Mayor James F. Kenney pledged he would end when he ran for mayor and must address even after the statue comes down. Removing the statue will not erase Rizzo's legacy, but it will show that Philadelphia refuses to honor a man who made a career out of bigotry.

Members of the Green Party City Committee agree that the statue has no home on the steps of a city building. Chris Robinson, GPOP Membership Secretary, said, "I lived through the Rizzo Calamity and participated in the 'STOP Rizzo' movement to prevent him from changing the City Charter. Some now suggest moving his statue to a more appropriate place, and I believe that it would be appropriate to locate it in the courtyard of Eastern State Penitentiary." Jarrett Anderson, GPOP Treasurer, said, "Rizzo's statue should be moved to the bottom of the Schuylkill River."