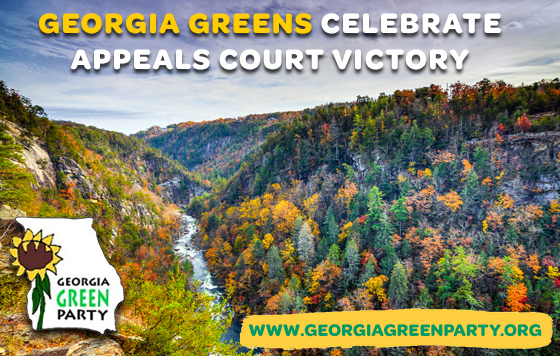 The three-judge panel released a unanimous two sentence ruling validating the lower court’s ‘well-reasoned opinion’ in favor of improving ballot access for independent and political body Presidential slates. Last year's decision imposed as an 'interim remedy' a ballot access petitioning threshold of 7,500 signatures. That provided significant relief for the Georgia Green Party and the Constitution Party of Georgia, co-plaintiffs in the 2012 suit brought against Brian Kemp, Georgia Secretary of State.

Laughlin McDonald, director-emeritus of the ACLU’s Voting Rights Project, who represented the plaintiffs in the case, called today's Court Order, "a great decision," pointing out that the state failed to put up any "evidence whatsoever as to voter confusion or ballot overcrowding", the justifications they asserted in defense of the 1943 statute. Seventy-three years ago black Georgians were denied access to the all-white Democratic Primary. The ballot access law was originally drawn to ensure that they could not run as the nominee of any other party on the General Election ballot, either.

The Atlanta Journal and Constitution today reported that Secretary Kemp is weighing an en-banc appeal of the three-judge panel's ruling to the eleven-judge appeals court.

Although the interim remedy provides significant relief with respect to the scope of the petition drive required to place a Presidential slate on the ballot, it left in place a wide array of other barriers raised as concerns by the Georgia Green Party in its pleadings, affidavits and depositions. The signatures must still be collected on legal-sized paper; signed in person, not electronically; contain residential addresses and birth dates; have each page notarized and then parceled out to each individual county for a validation that frequently disqualifies half or more of the signatures submitted.

"Americans are clamouring for a functioning democracy," said Cyle Bohannon, mother of three, resident of Carrolton and the Secretary of the Georgia Green Party. "While the interim remedy is quite limited in its scope, Judge Story's order and the Apepals Court panel's affirmation each count as a significant if incremental victory for our efforts to offer Georgians a politics worthy of our children."

In the 2016 race, the Georgia Green Party submitted more than 11,000 signatures, but only 5,925 were deemed valid. While this meant Dr. Jill Stein, and her running mate Ajamu Baraka, a Georgia resident, were denied a place on Georgia’s ballot, the ticket did qualify as certified write-in candidates. Stein is reported to have won 7,674 votes, although examination of tabulation machine reports from a sample of counties reveals potential for lost votes due to a failure to weigh voter intent.

“We appreciate this panel's and Judge Story's courage to do the right thing, especially in this heated political climate,” said Hugh Esco, co-chair Georgia Green Party, who has twice run for Lieutenant Governor. "And we still have much to do. Last year's ruling puts contesting the Presidential race within our reach. But the barriers we face for other state-wide and especially local offices remain unconstitutionally high. I suspect further judicial intervention is yet required to remedy the exclusion created by the 1943 statute."

Georgia law requires a showing of 20 percent of the votes cast in a preceding gubernatorial or presidential election, to qualify as a political party eligible to nominate candidates in state-financed primaries. Access to the ballot for state-wide office can be retained by a political body which delivers 1 percent of the eligible state-wide vote in a previous election. The state's 5% petitioning barrier for non-state-wide offices are the most restrictive such rules in the entire world. Georgia Green Party officers have claimed for years that the State's failure to accurately tally write-in votes have made this requirement even more difficult to attain without a ballot line.

“While Greens certainly have something to celebrate today, in the midst of so much abuse being suffered from the federal government, this victory is more about the voters of Georgia than the Green Party; it is about ensuring their voting rights," said Bruce Dixon, co-chair Georgia Green Party and Managing Editor of BlackAgendaReport.com. "As we build on this victory, we intend to offer Georgia voters candidates of integrity ready to earn votes. We think voters might prefer that to the fear-mongering which too often substitutes for meaningful debate on the issues that matter.”

* a solar transition as a key component of taking urgent action on global warming,

* dismantling a system of mass incarceration which subjects one in thirteen of our adult neighbors to judicial supervision,

* dismantling the surveillance state quite dramatically being leveraged to deny muslim Georgians the religious freedoms on which this country was founded, and internet and phone service users any privacy from warrantless searches, and wide range of other abuses as well.