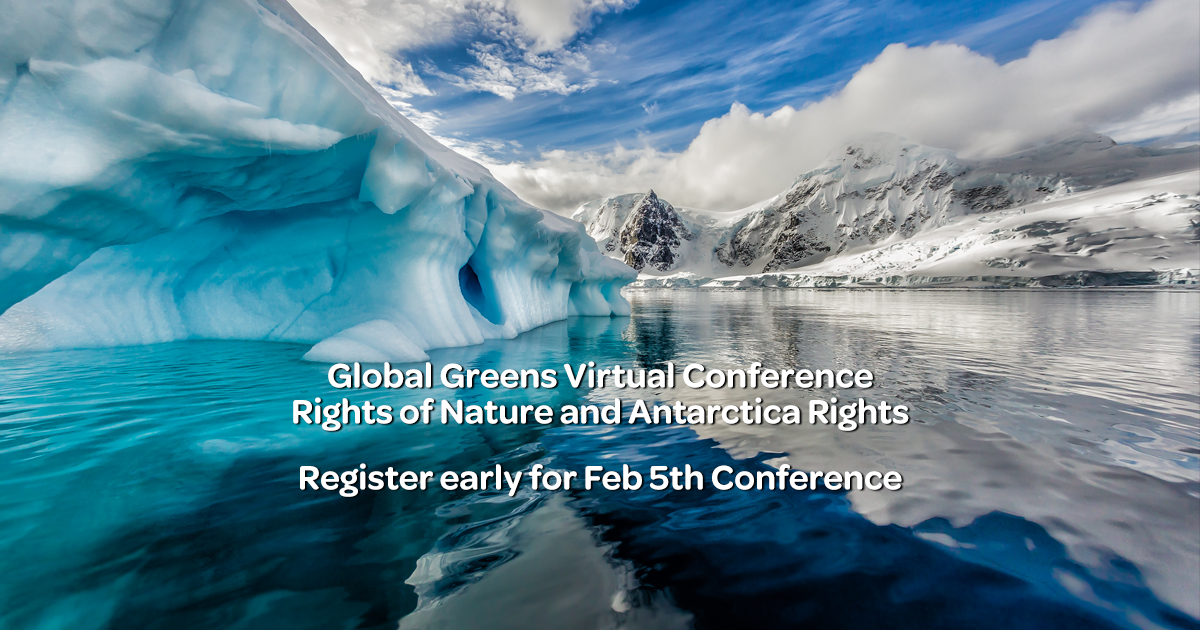 The International Committee of the Green Party US with The Green Party of Florida and The Green Party of New Jersey invites all to attend, Rights of Nature and Antarctica Rights on February 5, 2022, from 1 to 3:00 PM ET, online during the 2022 Global Greens Virtual Conference, Connecting For Green Action. Register for an entire day of informative and inspiring sessions from Green Parties and experts across the world.

You will be redirected to the Whova conference application software. After adding your registration information, you can add sessions to your personal agenda.

Use the feature selecting your local time zone.

Use the option to add your sessions to your calendar right from within the app. so you don't miss anything!

Diane Moxley, facilitator of the session is an activist and an attorney. She is a member of the Green Party of New Jersey and the International Committee of the Green Party of the United States. Diane has been involved in activism in New Jersey and across the country in everything from getting money out of politics, fighting pipelines and fossil fuels, advocating for healthcare for all, fighting for immigrants’ rights and economic justice, and fighting against racism, imperialism, the military-industrial complex, and mass incarceration, and more.

Michelle Scheather has been the Australian Greens International Development Coordinator for six years. She has worked on all 7 continents, focusing on environmental and human rights initiatives for 30+ years in the international and Australian NGO community. Previously, Michelle held the role of Campaigns Director for Greenpeace International in the Netherlands; and coordinated their priority campaign projects and field expeditions in remote areas such as the Norwegian Arctic and French nuclear test site in the South Pacific. Her interest in Antarctica began in the 1980s in establishing the World Park.

Winona LaDuke, a member of the Mississippi Band Anishinaabeg (Ojibwe) of the White Earth reservation in northern Minnesota, Executive Director of Honor the Earth, Co-Chair of the Indigenous Women’s Network, former two-time Green Party US candidate for vice president of the US, former board member of Greenpeace USA. Winona is a graduate of Harvard and Antioch Universities, a prolific author, economist and prominent Native American environmental activist for Rights of Nature and Rights of Manoomin, who advocates for Indigenous control of their homelands, natural resources, and cultural practices.

Cormac Cullinan led the drafting of the Universal Declaration of the Rights of Mother Earth proclaimed on April 22, 2010, by the People’s World Conference on Climate Change and the Rights of Mother Earth in Bolivia. He is an environmental attorney and governance expert, a pioneer of Earth jurisprudence, a speaker, and inspiring author including the groundbreaking, “Wild Law: A Manifesto for Earth Justice.” Cormac lives in Cape Town, South Africa, is the Director EnAct International, and the Wild Law Institute and sits on the Executive Committee of (GARN) the Global Alliance for the Rights of Nature.

Cilla Wehi, Te Punaha Matatini and Centre for Sustainability, University of Otago NZ. Priscilla Wehi PhD is an interdisciplinary conservation scientist who works with Maori communities and leads the Vision Mātauranga team of Ross RAMP, responsible for examining and evaluating the effectiveness of the Ross Sea MPA in Antarctica. See http://maoriantarctica.com

Alistair Allen is the Antarctic campaigner with the Bob Brown Foundation (founder Bob Brown, former parliamentary leader of Australian Greens) based in Hobart Tasmania. The Foundation was instrumental in stopping the concrete airstrip near Australia's Davis base. Alistair has campaigned for the Antarctic with Sea Shepherd for many years.

Dr. Yelena Yermakova, Oslo University, works in political philosophy. She is interested in the governance of international spaces such as the Polar regions, the deep seabed, cyberspace, atmosphere, and outer space. Specifically, her research focuses on which institutions should govern these spaces and what makes these institutions legitimate.

Lizzie Adams is the organizer for this session, an environmental activist, community organizer, and Rights of Nature advocate, member of the Green Party of Florida, GPUS International & EcoAction Committees, initiator of the GPUS IC Resolution on Antarctica.


Featuring video messages on Rights of Nature from:

Elisabeth May, Parliamentary Leader of the Green Party of Canada, representing the southern Vancouver Island riding of Saanich-Gulf Islands on the territory of the W̱SÁNEĆ Nation.

Robin Harris, Cochair of the Green Party of Florida, running for FL District 46, in Orange County, FL, the location of the largest US municipal Rights of Nature win.

Howard Switzer, a Tennessee Green, is Cochair of the Banking and Reform Committee (BMRC) of the Green Party US.

Washington Greens members supporting the Sauk-Suiattle Indian Tribe lawsuit against the city of Seattle on behalf of the salmon species damaged by dam construction.

… along with other important Green Party Rights of Nature initiatives!