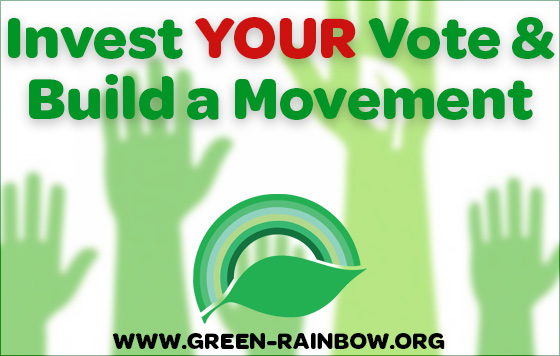 There are only three days left to Election Day on November 8th and it has been very exciting. We have seen the Green Party run candidates and get exposure like never before. Jill Stein and Ajamu Baraka have not only helped build a national movement with their run for President and Vice President of the United States but also placed the Green Party on the map again.

Further, in Massachusetts we have two candidates running for the office of State Representative. They are: Danny Factor for the 14th Middlesex District and Charlene DiCalogero for the 12th Worcester District. With your support the Green Party, and its Massachusetts affiliate, the Green-Rainbow Party will continue to lead the way with strong and viable candidates like these.

Yes together we can change the face of U.S. politics and create the kind of world we want to live in. 5% of the vote nationwide will allow the Green Party to receive about $10 million in federal funds. Those funds will help us to ensure ballot access in all 50 states, access to media, develop national campaigns and schools, and push for electoral reform.

In addition, 3% of the vote statewide will help us to retain our major party status in Massachusetts. So let's do what we can to move forward. This election is about building a political movement that will fight for people and not corporations.

We would be remiss if we did not mention some very important ballot initiatives. Voting No on ballot question #2 supports public education in Massachusetts and not charter schools. Lifting the charter cap hurts public schools by taking money away and privatizing public education. We also encourage people to vote Yes on ballot question #4 and legalize marijuana. We have seen too many individuals lose out on opportunity of housing, employment, and financial aid by engaging in the recreational use of marijuana.

Remember to tell your family, friends, colleagues, and neighbors to vote Green in 2016. Let's rock the vote the Green way. It can make all the difference in this election.

Together let's move forward our state and country. Thank you so much for your support. See you at the polls with Jill Stein and Ajamu Baraka signs,