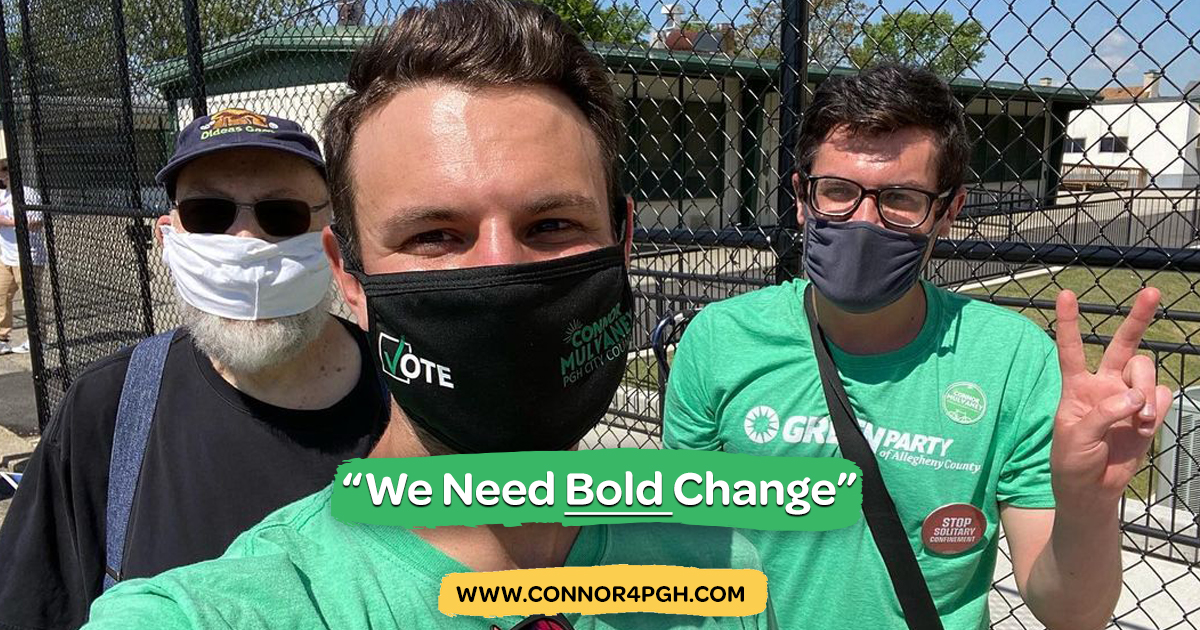 A Green Party candidate for the Pittsburgh City Council seat held by Anthony Coghill is hoping to capitalize on a progressive movement that propelled state Rep. Ed Gainey to a win over Pittsburgh Mayor Bill Peduto last week.

“People in Pittsburgh and across the country are beginning to realize we need bold change and we can’t wait for the same old boys to do it for us. We are here to make it for ourselves,” Connor Mulvaney said Tuesday evening. He was speaking at a kickoff to his campaign, livestreamed from the war memorial cannon in the city’s Brookline neighborhood

Mulvaney, 28, of Brookline, has the support of the Democratic Socialists of America’s Pittsburgh chapter, the same group that supported state Reps. Summer Lee and Sara Innamorato in their 2018 Democratic primary victories over established incumbents Paul Costa and Dom Costa.

Lee and Innamorato supported Gainey in his victory over Peduto in the Democratic primary last week.

Mulvaney, a bicycle technician who works in Robinson, is also a community organizer who has worked with Re-imagine Beaver County. He’s also active in the South Hills Safe Streets group, he said.

“This campaign has fully embraced the fact that we’re a third-party movement outside of the local political establishment,” Mulvaney said. “There are people out there who aren’t super voters who also have concerns and interests and are willing to mobilize.”

He and his supporters will be knocking on doors and meeting with people who live in District 4’s neighborhoods, which include Beechview, Bon Air, Brookline, Carrick, Mt. Washington and Overbrook.

Mulvaney said he believes people deserve good housing, good health care, a clean environment and a promising future — the bedrocks of what the Green Party stands for.

“We have to imagine a better Pittsburgh for ourselves and those that come after us,” he said.

Coghill is finishing his first term on council. Last week, he fended off a challengefrom Bethani Cameron in the Democratic primary, winning with 62% of the vote, according to unofficial results.

Coghill has said he approaches serving on city council from the viewpoint of a contractor.

“I’m a contractor by trade. When I came in, I came in with the mentality of a contractor,” said Coghill, the founder of a roofing company. “I need four more years to finish what I started.”