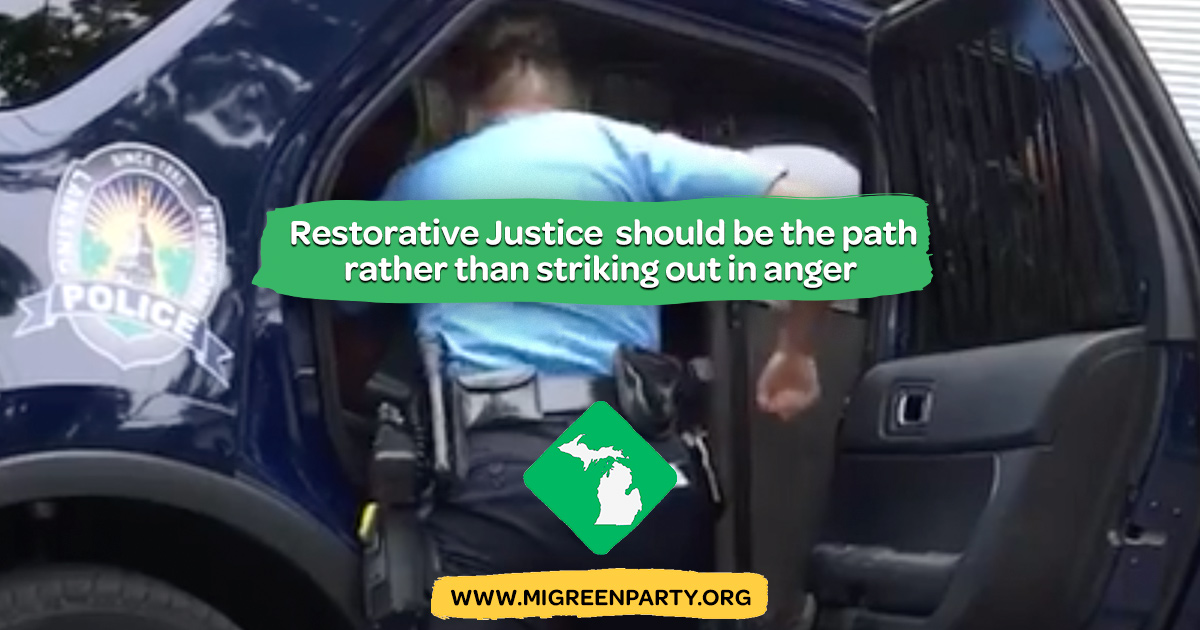 Officers were dispatched to apprehend two teens, a 15 year old male and 16 year old female. The pair were wanted for violating probation and sought as runaways. The sixteen year old was not cooperating with officers. Once cuffed and strapped into the back of a police cruiser, the 16 year old female wedged a foot into the cruiser’s door hinge. Subsequently, a female Lansing police officer struck the cuffed and strapped subject more than a dozen times.

The incident was witnessed by multiple area residents. Raw cell-phone video was shot by neighborhood residents, which is available on Facebook.

In a statement, Lansing Police Chief Yankowski remarked that the strikes to the teen were department protocol. On Saturday, more than 100 area residents gathered in front of the Lansing Police Department to peacefully protest the incident, including members of Black Lives Matter and other organizations.

Over the weekend, the cell phone video went viral, quickly surpassing one million views. Bodycam videos of the incident were released on Saturday and are available on the Lansing Police Department YouTube channel:

Lansing Mayor Andy Schor has been the target of recent criticism for his administration’s handling of a case where a couple was arrested for assisting homeless individuals being sent into sub-zero temperatures. The homeless residents were waiting at a bus terminal when police ejected them and arrested the aid providers.

According to local CBS affiliate WLNS, Schor offered a lukewarm, boilerplate response to the beating incident, stating “I am aware of the incident this morning regarding one of our police officers and the two youths who were resisting arrest. Allegations and complaints against our police officers are taken very seriously and we have launched an investigation into this incident. We hold our police officers to the highest standards of professionalism and integrity.”

Rita Jacobs is Co-chairperson of the Peace Action Committee of the Green Party of the United States. Secretary of the Capitol Area Greens, a Green Party of Michigan local that includes Lansing, MI, Jacobs offers her take on the incident as follows.

GP-MI: Rita, please tell us about the incident involving Lansing police officers and their treatment of a young black female?

Rita Jacobs: From what I understand of the reports on this the police were arresting a 16-year-old on a probation violation for “escaping” from a juvenile detention center. The girl was upset and uncooperative. She told the police she would not go voluntarily; they would need to drag her, which they did. Although not shown on the videos that were posted, there was one report that said they dragged her face down while she was handcuffed to the police car. They placed her in the police car, and she left one leg outside the car and refused to put it inside the car. The female police officer assisting with the arrest then started yelling and repeatedly punching the girl’s leg, and then closed the car door with the girl’s foot in between the door where the hinge is located and the car, and applied bodily pressure to it while the girl was screaming.

GP-MI: You are the Secretary of the Green Party local that includes Lansing, Capitol Area Greens. What has been the response from the community to this incident?

RJ: The community – especially the black community – is outraged, and held a rally on Saturday outside the city hall where the mayor and police station are both located. There are a group of organizations in Lansing that are seeking Restorative Justice as a peaceful conflict resolution tool that brings together people who have had a conflict to find a way to heal the harm. Members of these organizations are addressing a special meeting by the Police Commission.

GP-MI: Which organizations have mobilized in the community to speak out about the incident?

GP-MI: You are one of the co-chairs from the GPAX, the Peace Action Committee. What’s your response to this incident and the way it was handled by police?

RJ: Of course, as a co-chair of the Peace Action Committee, and supporting our pillar of nonviolence, the goal should always be to handle these matters in a peaceful and respectful manner. I do know that the Lansing police have some crisis intervention teams trained to deal with difficult situations, but not all police receive training in crisis intervention.

I also belong to the National Alliance on Mental Illness, which works with police departments to promote crisis intervention training. Mental illness can be one cause of disruptive behavior by youth. And mental illness generally first manifests itself between ages 14 and 22. Unfortunately, our education system overlooks the importance of teaching the population about mental illness. Regardless of the cause of the behavior of this 16-year-old, punching her repeatedly and trying to close her foot in the car door are not the appropriate methods of dealing with this behavior. The police woman appeared to be very angry, and police officers who are prone to responding violently to their own anger should not be on the police force.

GP-MI: How can police form better relationships in the community to prevent this type of problem from happening in the future?

GPAX: Ideally, all police should be carefully screened for psychological tendencies to over-react to their own anger before being hired. And police should be carefully trained about how to deal with difficult situations – especially when they involve children. I encourage all members of the community to recognize the institutionalized racism that continues to exist in our communities, and the effects that is has on the minority population – particularly persons of color – and become engaged in opportunities to improve the way in which our minority populations are treated in society. They need to work with police departments to create oversight committees by citizens, and truly become the protectors of the community they represent.