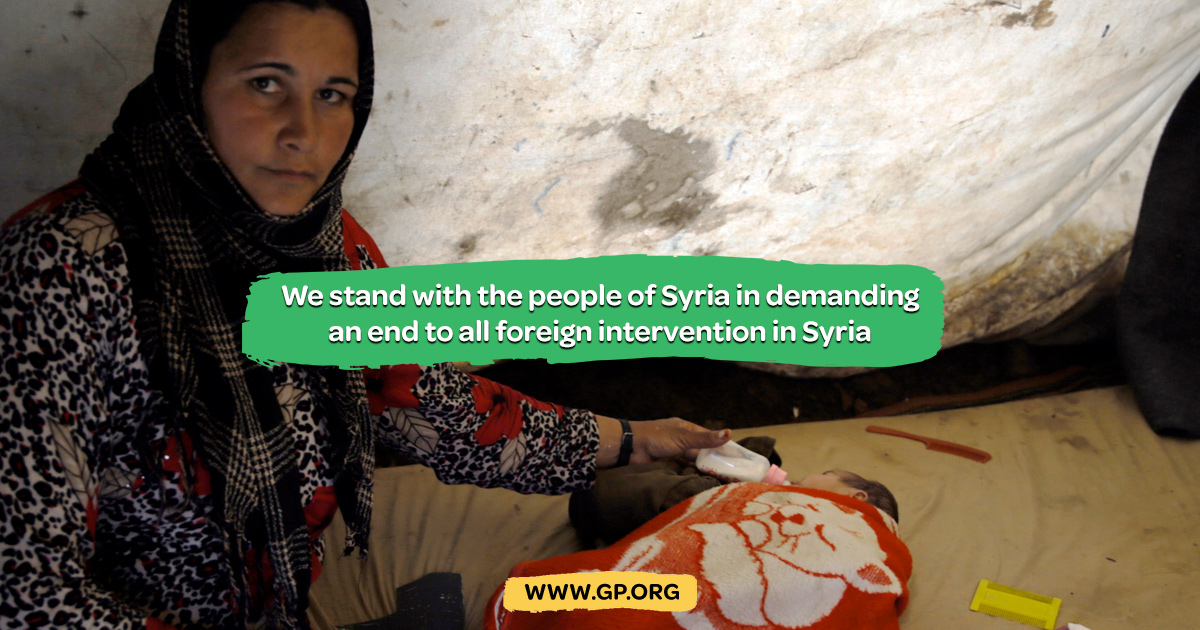 Calls for Withdrawal of All Military Forces From the Region

The Green Party Peace Action Committee (GPAX) supports the withdrawal of U.S. troops from Syria, consistent with its broader call to end all U.S. acts of military aggression, occupation and intervention in the internal affairs of all sovereign nations.

A chorus of commentators in the corporate media, leaders of the military-industrial complex and members of Congress from both corporate parties were quick to condemn President Trump’s announcement of the planned withdrawal last month. Although the criticisms were framed as opposition to President Trump for his poor judgment, which made the criticisms more politically palatable, the real reason for this opposition is that the U.S. ruling class has long pushed for the overthrow of the Assad government in Syria -- especially after President Bashar Al-Assad rejected Western plans for a $10 billion pipeline to ship natural gas from Qatar to Turkey in 2009.

Some Americans who ordinarily oppose U.S. war and intervention may find themselves persuaded to oppose the withdrawal because the initiative came from Trump. However, such opposition is ill-founded. To support a particular action by the president does not imply support for the president himself, trust in his judgment or motives – or even that he will make good on his promise. Such actions must be evaluated on their own merits. In this particular instance, for whatever reason, President Trump has announced an action that merits support by the peace movement and all Americans. He should be encouraged to take further like actions, not criticized simply because so many of his other policies and statements merit criticism.

Criticisms of the proposed withdrawal are based on the flimsiest of pretexts. Many critics cited Secretary of Defense James “Mad Dog” Mattis’s resignation in protest after Trump’s announcement, lauding Mattis as a “stable figure” in the administration. In aligning themselves with the likes of Mattis, critics are making common cause with a sociopathic war monger who dismissed reports of civilian casualties in Iraq, and once remarked that it was “a hell of a hoot” and “fun to shoot some people” in Afghanistan.

Other critics feigned concern over the fate of Kurds in Syria, ignoring the long U.S. history of using the Kurds as a surrogate force and political football, repeatedly courted and rejected as U.S. ruling class interests dictate. Although Kurds in Syria were concerned about being attacked by Turkey, they were savvy enough to see which way the wind was blowing and are already reaching a rapprochement with the Assad government to ensure their security.

Finally, critics raise the specter of a resurgence in ISIS if the United States leaves – a criticism made ridiculous by a tremendous body of evidence showing that the rise of ISIS was itself a product of U.S. intervention in the region.

More importantly, critics of the withdrawal overlook two fundamental facts. First, U.S. funding of insurrection in Syria, and its bombing, drone strikes and military occupation of a large swath of Syrian territory are all utterly illegal under international law. Like all U.S. attacks on other sovereign nations, these acts are in violation of the Kellogg-Briand Pact, the Nuremberg Charter and the United Nations Charter, all treaties to which the United States is a signatory. These acts, ordered in the first place by former president Obama, were also patently unconstitutional, made possible by an abdication of Congress’s exclusive constitutional authority to declare war.

Second, the attacks on Syria, like all U.S. attacks on other sovereign nations, do not in any respect serve the interests of the working-class majority of the United States. Rather, they represent the designs of Big Oil, the military-industrial-congressional complex, the Deep State, and other ruling-class interests that profit immensely from U.S. domination of the globe and perpetual warfare.

These acts of war do not enrich working-class people. They represent an enormous theft of financial resources badly needed to combat climate change, provide health care for all, higher education for all who desire it, and economic security for all. Military spending does not create jobs; it destroys jobs. Every bomb dropped and every drone strike represents millions of dollars less for schools, health care, affordable housing, public transportation, infrastructure repair and essential services.

And of course, every bomb dropped and every drone strike on working men, women and children in nations like Syria is a thoroughly immoral and inhumane act, causing mass death, incalculable human suffering, and contributing to a global refugee crisis.

We stand with the people of Syria in demanding an end to all foreign intervention in Syria, a restoration of its national sovereignty, and an end to the seven-year nightmare the people have been living. An end to “intervention” must include not only the removal of all U.S. ground troops, but the removal of all occupying forces, mercenaries, private contractors, an end to CIA and other covert intervention, an end to support for surrogate forces in Syria, and end to attacks on Syria staged from Iraq or other countries, and an end to aerial assaults on Syrian territory.

We further call on the peace movement and all concerned Americans to demand that the Trump administration and Congress put an end to all U.S. acts of military aggression, occupation and intervention in the internal affairs of other sovereign nations, close all U.S. foreign military bases, and conduct U.S. foreign policy in a peaceful manner, in compliance with international law. 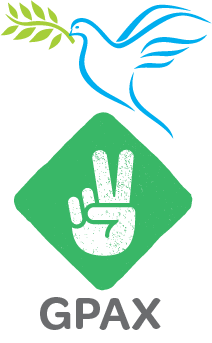 The Peace Action Committee of the Green Party of the United States (GPAX) exists to facilitate the planning and achievement of peace and justice action proposals adopted by GPUS, and to support and promote the Party’s Anti-War candidates and agenda.