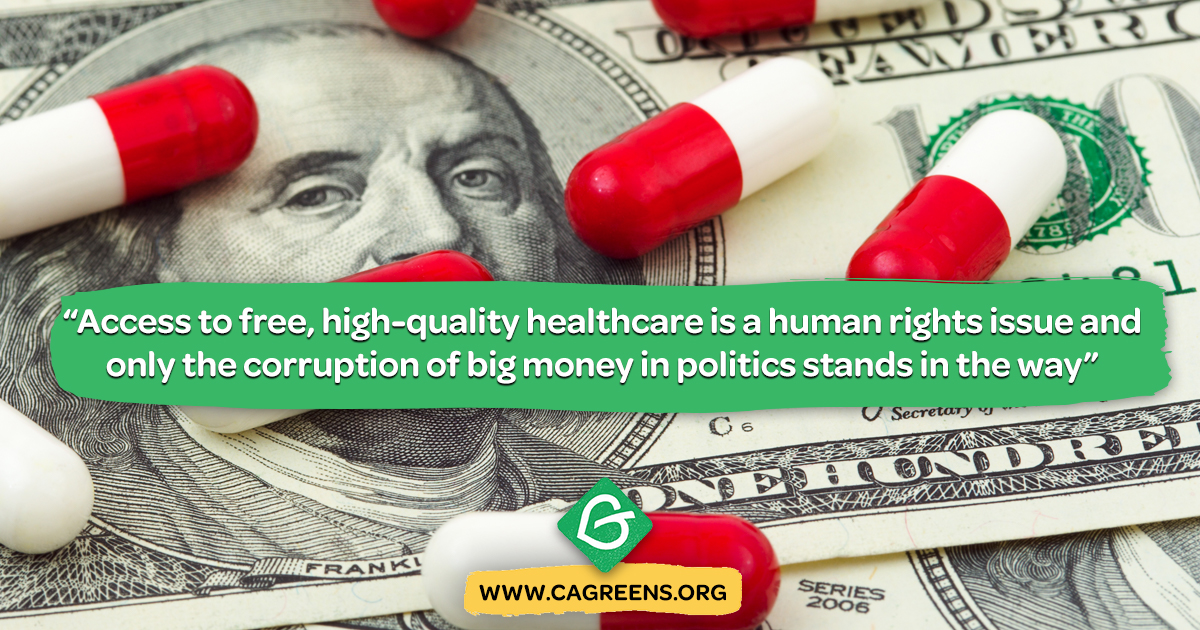 “The pandemic has shown us the weakness of the current privatized health care system,” said Hermanson. “Four years ago, Sacramento floated then sank a healthcare bill, and they gave the same excuse: needing to figure out the financing. We already know this bill will not only save lives but also save money in the long run. What did Sacramento do in four years? Nothing but lip service, even while facing a global pandemic.”

Nearly three million Californians have no health insurance and millions more have insurance they can’t afford to use because their copays, premiums and deductibles are too high and continue to rise. Polling shows that roughly 55 percent of registered California voters either somewhat or strongly agree that a single-payer program “would improve the nation’s ability to respond to disasters and pandemics such as COVID-19.”

“Elected leaders in California have no excuse not to take AB 1400 and run with it,” said Laura Wells, Green Party of California spokesperson.

She added, “California has what is called a Democratic super trifecta, with the governor’s seat and super-majorities in both houses of the legislature. Gov. Newsom ran on supporting single payer during his campaign in 2018. Now, especially with the COVID crisis, is the time to pass guaranteed healthcare for all Californians.”

In January 2021, GPCA endorsed a petition to ask Gov. Newsom to begin fulfilling his promise of implementing single-payer in California by requesting the necessary federal Medicare waivers from the Biden administration in its first 100 days. The governor has not yet made this request.

The CalCare program would provide comprehensive universal single-payer health care coverage and a health care cost control system for the benefit of all residents of the state regardless of employment, income, immigration status, race, gender or any other considerations.

As stated in the AB 1400 bill text: “Billions of dollars that could be spent on providing equal access to health care are wasted on administrative costs necessary in a multi-payer health care system. Resources and costs spent on administration would be dramatically reduced in a single-payer system, allowing health care professionals and hospitals to focus on patient care instead.”

The U.S. spends more per person on health care than any other nation in the world, yet the U.S. ranks last compared with six comparable industrialized countries (Australia, Canada, Germany, the Netherlands, New Zealand and the United Kingdom) in quality, efficiency and equity,

“While an estimated 68,000 Americans die each year from the lack of access to care, insurance companies are reporting record profits. This year the losses are off the charts with nearly a third of all COVID deaths linked to lack of health insurance,” said Dr. Jill Stein, the 2016 Green Party presidential nominee and a physician advocate for healthcare justice since the 1990s.

She adds: “Healthcare is not a partisan issue nor a matter of progressive vs. conservative politics. Access to free, high-quality healthcare is a human rights issue. A supermajority of Americans are demanding it and it’s only the corruption of big money in politics that stands in our way.”

Barry Hermanson is a Green Party of California Coordinating Committee member, GPCA representative to Healthy California Now, a statewide coalition of organizations and activists dedicated to establishing a single-payer Medicare For All system in California, and a former small business owner. Contact him at [email protected] or write to him via the Bay View.

Laura Wells is spokesperson for the Green Party of California. She can be reached at [email protected].