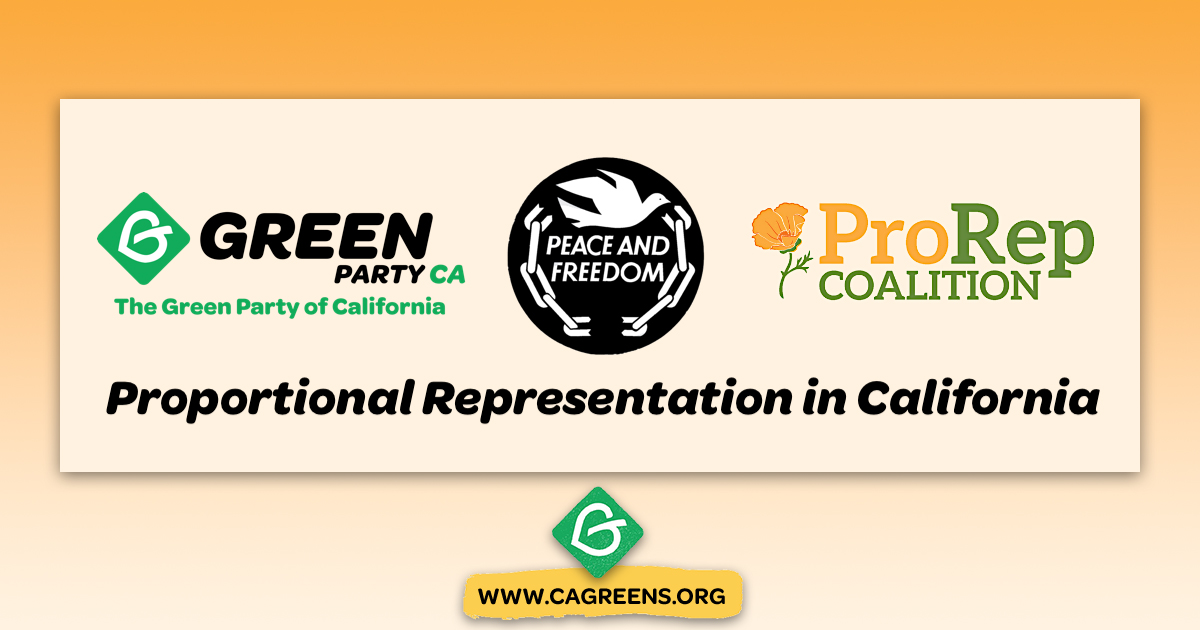 In a nation with a political climate centered around a two-party system since its inception, debate and discourse is consistently raised about effective ways to reform voting so that people of our country can vote according to their values rather than vote for one of the two evils. The dominant corporate parties suppress third parties like the Greens and silence voter’s voices disenfranchising more and more people from engaging in electoral politics because they are frustrated with the lack of choice and representation.

The Green Party of California has advocated for comprehensive electoral reform for decades and at the core of our platform are the adoption of proportional representation, an end to the Top Two Primary, campaign finance reform and the elimination of winner-take-all elections. With the current U.S. winner-take-all system the highest vote-getter represents 100% of the electorate resulting in an unrepresentative government. This system results in a lack of voter choice, gross under-representation of women and racial and political minorities, low voter turnout, issue-less hostile campaigns, a two-party monopoly, political corruption by big money, and gerrymandering of legislative districts to protect incumbents.

To rectify the many problems with the current electoral systems built by the duopoly, the Green Party of California has joined the ProRep Coalition, a newly founded 501(c)(3) electoral reform organization. The aim of this coalition is to promote proportional representation in California elections, which would result in our elected officials being more proportionately aligned with the values and interests of California voters. The proposal to join this coalition was approved by the GPCA delegates by consensus at GPCA's last General Assembly. The delegates also approved the appointment of David Cobb as the GPCA liaison to the ProRep Coalition. The Peace and Freedom Party has since joined the coalition as well. Learn more about at ProRep Coalition’s website