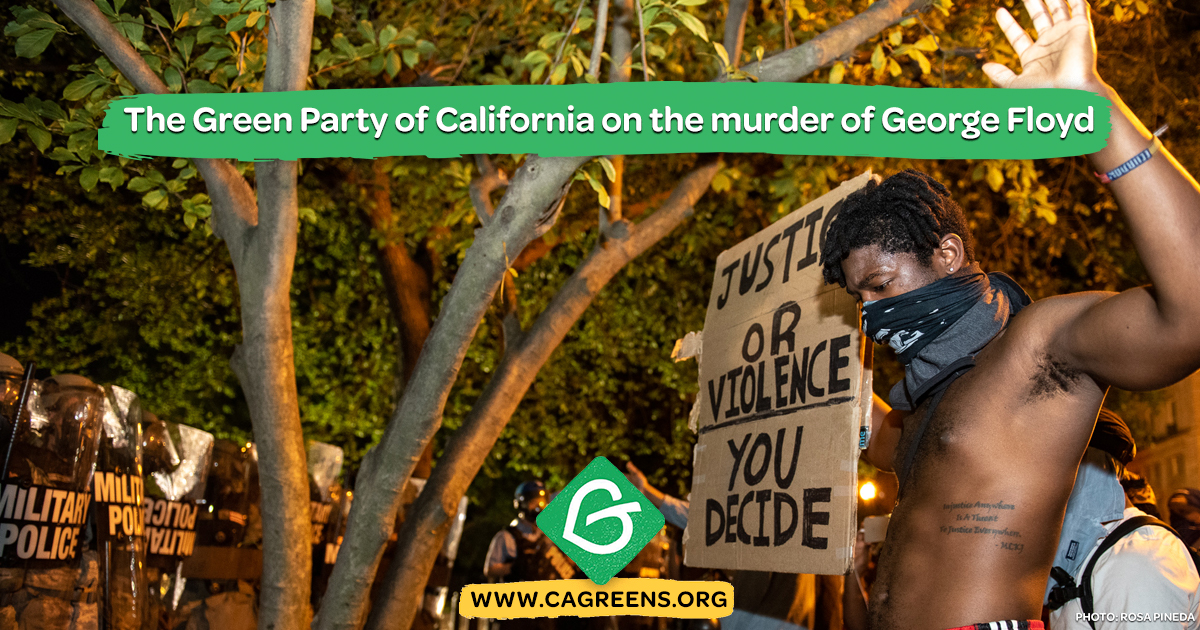 SAN FRANCISCO – The Green Party of California stands in solidarity with the Black and Brown community and condemns the brutal murder of George Floyd by Minneapolis police officers on May 25th. We join the Movement for Black Lives in calling for the arrest and prosecution of all police officers involved in George Floyd's murder, the end to police brutality and to the global racialized capitalist system.

This violent criminal act at the hands of police who are supposed to protect people from harm stems from a widespread culture of racism, white supremacy, and disregard for black lives that dates back to slavery. The resulting outrage and global protests by diverse communities rightfully demand that we fundamentally change our society, and our culture.

George Floyd is another victim in a series of racialized killings by police forces that have been going on for centuries in the United States. In California, since the beating of Rodney King by LAPD in 1991, numerous unarmed black and brown people have been executed by law enforcement officers including Oscar Grant, murdered by Oakland BART police officers in 2008, 13-year-old Andy Lopez shot by a Sonoma County sheriff's deputy in Santa Rosa in 2013, Antonio Guzman Lopez killed by San Jose State University police officers in 2014, Luis Gongora Pat shot and killed by SFPD in 2016, and Stephon Clark killed by two Sacramento police officers in 2018. And just this week, amidst protests over the killing of George Floyd, Sean Monterrosa was murdered by a police officer when kneeling outside a store in Vallejo.

A 2015 report revealed that African American men had been killed by police in California at eight times the rate of other residents since 2005, even though they only made up about 3% of the state's population at the time. In 2018 in San Francisco, SFPD stopped black people at rates over five times their representation in the city’s overall population. California also has some of the strictest laws protecting officers from being held accountable for shootings in criminal court.

The Green Party of California condemns the curfew orders issued across California that are clearly an attempt to suppress people's rights to assembly and free speech, and also allow law enforcement to more easily arrest protesters, particularly people of color. Communities of color and working families already victimized by more violent policing, are also the most impacted financially by the shelter-in-place orders, and the most likely to lose their jobs, their health insurance and become ill due to COVID-19.

That’s why we MUST listen to the demands of the Black and Brown community today.

The Green Party of California joins the National Black Caucus of the Green Party of the United States and the Young EcoSocialists in demanding accountability and community control of the police. The Green Party supports the ability of cities to establish civilian police review boards to increase understanding between community members and police officers and sheriff's deputies that go beyond standard government bureaucracy. These boards would provide a public forum to air concerns on policy matters with sufficient autonomy and authority to ensure public oversight and accountability of their local police department or sheriff's office.

The Green Party platform calls for criminal justice reform to reverse the national policy of racially selective mass incarceration and to end police militarization. Curfews, police brutality, the use of tear gas, kettling, and restraining techniques such as choke holds are tactics employed by military states to intimidate and squash dissent. Social uprisings and unrest arise from injustice, not violence.

The racial, social, economic, and environmental crises we continue to face are the direct result of the capitalist system that puts profit over people, peace, and the planet. These interconnected crises, exacerbated by the current unprecedented COVID health crisis, disproportionately affect front-line low-wage workers and communities of color. Access to free universal healthcare, guaranteed jobs at a living wage, free high-quality education, affordable housing, clean water, and public ownership of energy (aka a REAL Green New Deal) are basic human rights that a true democratic government should provide.

Authors from Malcolm X to Richard Wolff have noted how capitalism supports racism. The historical moment has arrived for us to banish racism, capitalism, and other forms of oppression from our society. We must not fail to answer that call.