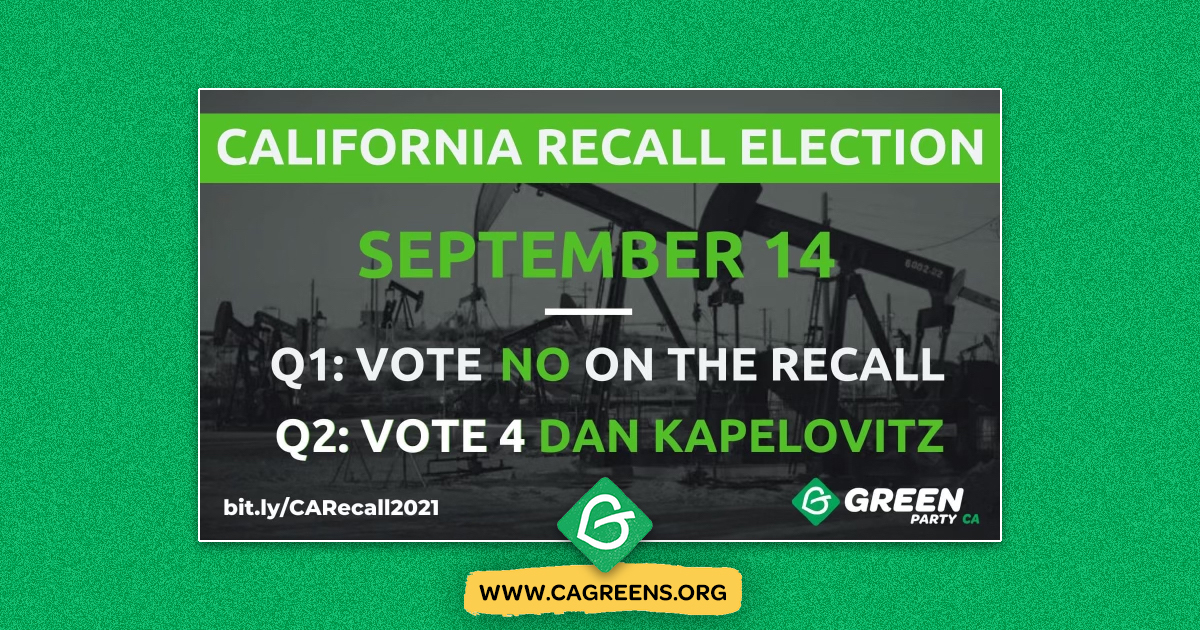 Vote by September 14 on the Gubernatorial Recall Election:

SACRAMENTO, CA - The Green Party of California voted overwhelmingly both to vote no on the recall of Gov. Gavin Newsom and to endorse Green Party member Dan Kapelovitz as his replacement should the recall vote pass.

Dan Kapelovitz is one of many former Bernie Sanders supporters who have joined the Green Party since 2016. He has a long record of grassroots activism, showing that for decades he has been aligned with the 10 Key Values of the Green Party. An attorney who also teaches law at the People’s College of Law in Los Angeles, his clients are mainly poor people caught up in the criminal justice system, as well as defenders of animal rights. More information about his campaign can be found online at https://kapelovitz.com.

"I oppose this recall. Governor Newsom and the Democratic Party have recklessly endangered the residents of this state by strong-arming all arguably qualified Democrats into not taking part in the race to potentially replace him, thus leaving the field to far-right Republicans. Should this desperate gamble to persuade Californians to vote no on the recall fail, I am the progressive candidate most able to win, to govern effectively, and to pursue a strong reform agenda," said Dan Kapelovitz. "A vote for my Green candidacy can be a transformational vote for more choice and more voice for Californians, via ranked-choice voting and proportional representation elections. These critically needed reforms would lead to a viable multi-party system for California, giving more people in our state a seat at the table of our democracy."

Greens oppose the recall because the lack of ranked-choice voting or a required runoff in this recall election creates the potential for a replacement to be elected by only a tiny minority of the voting public, and the candidates receiving the most attention are no better than Newsom and in many cases, far worse.

"The vote to oppose the recall is by no means a statement of support for Newsom," said Laura Wells, official spokesperson for the Green Party of California, and a former candidate for Governor herself in 2010. "Newsom has had Democratic Party super-majorities in both houses of the legislature and still his actions and inactions have continually gone against Californians’ progressive values. During this pandemic, he has thwarted Californians’ ability to receive unemployment benefits and receive rent subsidies. He has failed to address the climate crisis, stop fracking, hold PG&E accountable for its continued disaster inducing incompetence, or require it to compensate victims in a timely and appropriate manner, and he has failed to raise billions to fight the climate crisis by imposing a severance tax on oil and gas extraction, as is standard in other states."

"Despite having a budget surplus and despite the pandemic, Newsom and his supermajorities stunningly betrayed Californian voters by delaying consideration of a single-payer healthcare bill until sometime after 2021," said Wells. "He also vetoed a measure that would have enhanced democracy and broadened representation by allowing cities across California to use ranked-choice voting in local elections."

"We need these democracy enhancing reforms to end one-party rule, and give progressives a voice in Sacramento not chained to a party co-opted and corrupted by corporate donations and the 1%," said Greg Jan, coordinator of the Statewide Candidates Subcommittee. "A vote for Kapelovitz on September 14, and for Green candidates in next June's primary election, sends a strong message that Californians embrace progressive policies and electoral reform."

The recall election ballots must be postmarked no later than election day, Tuesday, September 14, 2021.