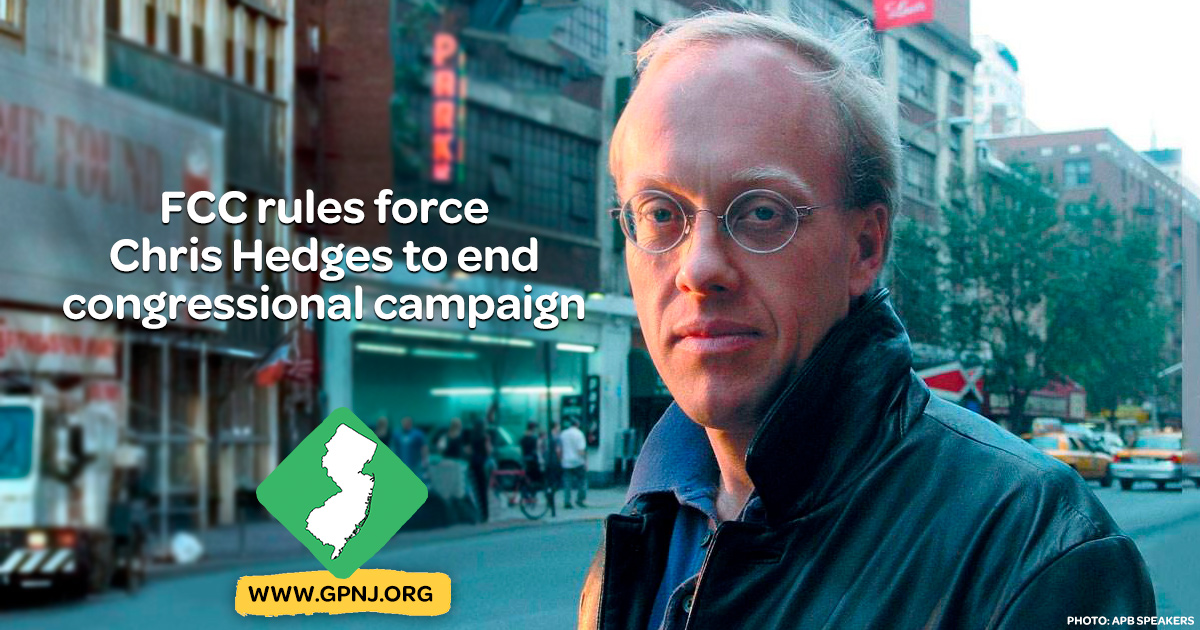 TRENTON, NJ – Regretfully, Chris Hedges was informed shortly after he made public his decision to run as the Green Party candidate for Congress in the 12th District of New Jersey that under FCC rules he is not permitted to run for federal office. Hedges hosts the Emmy-nominated television show On Contact broadcast nationally on RT America.

"As much as I would like to bring the platform of the Green Party into this Congressional race it makes no sense to give up a media platform with a large following for a Quixotic campaign against the Democratic Party machine," Hedges said. "I will, therefore, not run for the Greens as a Congressional candidate. I will, as in past elections, do all I can to highlight the progressive programs of the Greens and call out the corporate Democrats for their abject subservience to corporate power, the war machine and the ruling oligarchs."

"The Green Party of New Jersey (GPNJ) was thrilled to have worked with Chris Hedges and endorsed his run," said Diane Moxley, co-chair elect of the Green Party of New Jersey. "Unfortunately sometimes there are snags that prevent candidates from running that are out of our hands. Although it was short-lived, there was already a huge level of support locally and nationally immediately following the public announcement for Chris Hedges' run for Congress. We know his voice will be out there hitting on the issues that most politicians ignore, the need to end the systems that cause the death and destruction that plague our country. We will all continue to fight for a just world. We are happy to have Mr. Hedges as an ally right here in New Jersey."

"Chris Hedges' intention to run for U.S. Congress in New Jersey showed just how ready people are for a real alternative to the Democrats and Republicans and the political machine that exists in this state," said Madelyn Hoffman, GPNJ's candidate for U.S. Senate in 2020. "His support for the Greens and our progressive platform lends credence to those programs we will continue to put forward. This country is in dire need of a total overhaul in government -- as the consequences of the coronavirus pandemic reveal."

Craig Cayetano, State Co-Chair, was proud of the immediate camaraderie around the original announcement and remains optimistic despite this update. He said "While I'm saddened by this news I'm glad to see that Mr. Hedges is willing to continue to advocate on our behalf. We still have amazing campaigns in New Jersey and nationally this year to support. We will definitely reach back to Chris at the end of 2021 to explore a run for 2022. We are welcoming new registered and dues paying members each day. Let's continue to build, organize and grow the Green Party now to be prepared for the future."