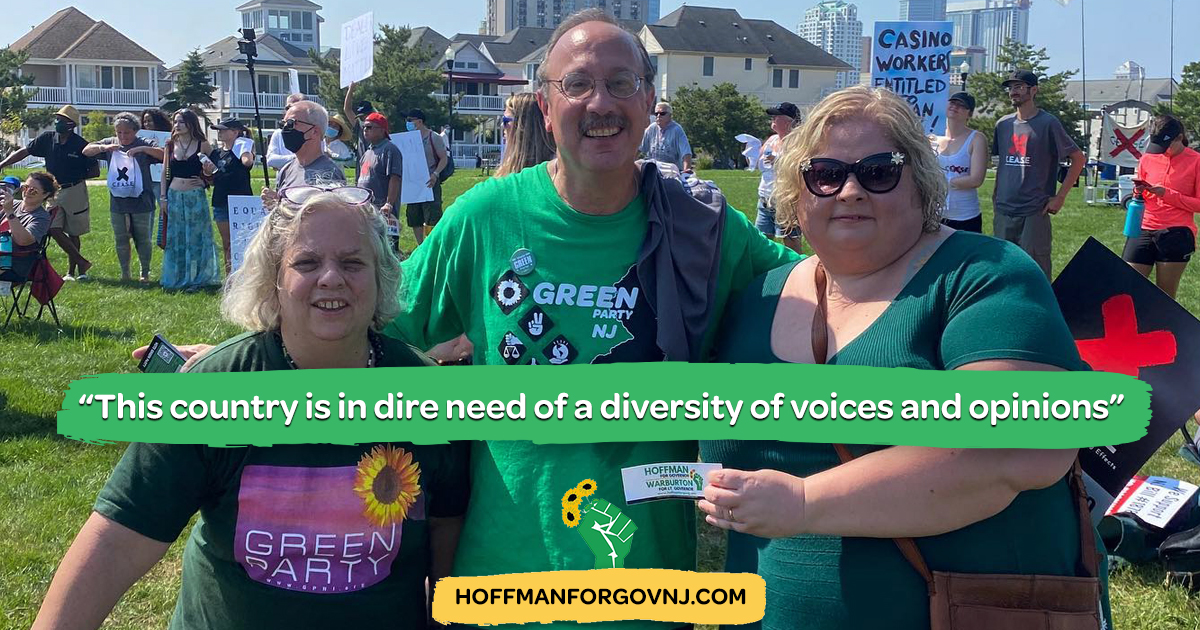 NEWARK, NJ — When the two main gubernatorial debates take place this election season in New Jersey, Madelyn Hoffman probably won't be taking the stage alongside Gov. Phil Murphy and Jack Ciattarelli. But according to the Green Party of New Jersey candidate, she's not surprised.

After all, politics in the Garden State are "the best democracy that money can buy," Hoffman says. 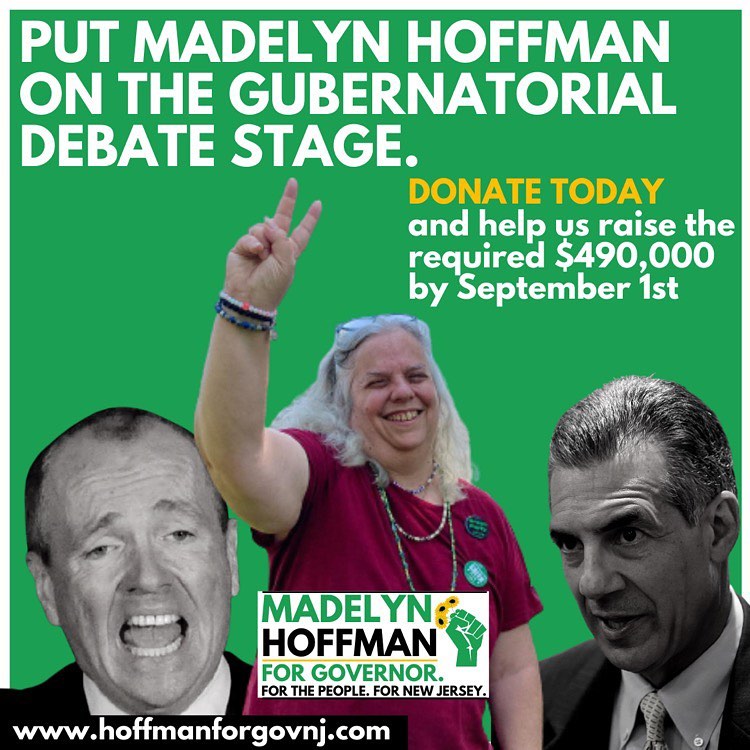 On Nov. 2, Murphy – the Democratic incumbent – will face a challenge from former state assemblyman Jack Ciattarelli, the Republican nominee. Other challengers include Hoffman, Gregg Mele of the Libertarian Party, Joanne Kuniansky of the Socialist Workers Party, and independent candidates Justin Maldonado and David Winkler.

However, voters tuning into the governor debates on Sept. 28 and Oct. 12 will only see two of those candidates: Murphy and Ciattarelli. And that's largely due to the hefty fundraising quota needed to qualify, according to Hoffman, who released a scathing statement about the process on Wednesday.

"I am running for governor of New Jersey with the Green Party of New Jersey in 2021. My first attempt to run for this political office was in 1997. It was difficult enough to qualify for participation in the debates then -- it was necessary to raise $210,000 to qualify for the debates and to be considered a 'serious' candidate. Here in 2021, that threshold has been raised to $490,000, almost half a million dollars. And that money must be raised by today, September 1! This is a travesty for a country whose political system is broken."

"The political establishment in New Jersey is doing everything in its power to limit the voices that are heard. Requiring that participants in the gubernatorial debates raise nearly half a million dollars creates the 'best democracy money can buy' … The Hoffman for Governor campaign firmly believes that if we met the requirements to be on the ballot by submitting at least 800 valid signatures of registered voters, then we should automatically be allowed in the debates for the position we seek. For governor in 2021, that would mean a total of five candidates would be on the debate podium -- Governor Murphy (D), Jack Ciaterrelli (R), Madelyn Hoffman (Green), Joanne Kuniansky (Socialist Workers), and Greg Mele (Libertarian)."

"It is not for the State Elections Commission or the media to determine who should participate in the debates and certainly, the amount of money raised should not be the deciding factor. This country is in dire need of a diversity of voices and opinions, instead of an ever-narrowing selection of voices and points of view. All ballot-qualified candidates should be invited to participate. In fact, the decision about the September 28 gubernatorial debate at the NJPAC in Newark was made before the State Elections Commission's own deadline for raising that almost half a million dollars. Especially at this time of year, the 101th anniversary of the ratification of the 19th amendment, we should not be continuing to squeeze out the voices of women -- and, of course, men -- who just aren't able to raise half a million dollars! It must be that the Democrats and Republicans fear that independent voices will challenge the policies they make from their comfortable perches of answering to the monied interests, whether it be demanding a real Green New Deal or single-payer health care for all or the abolition of ICE, for example. That fear of independent voices should be reason enough to open up the debates."