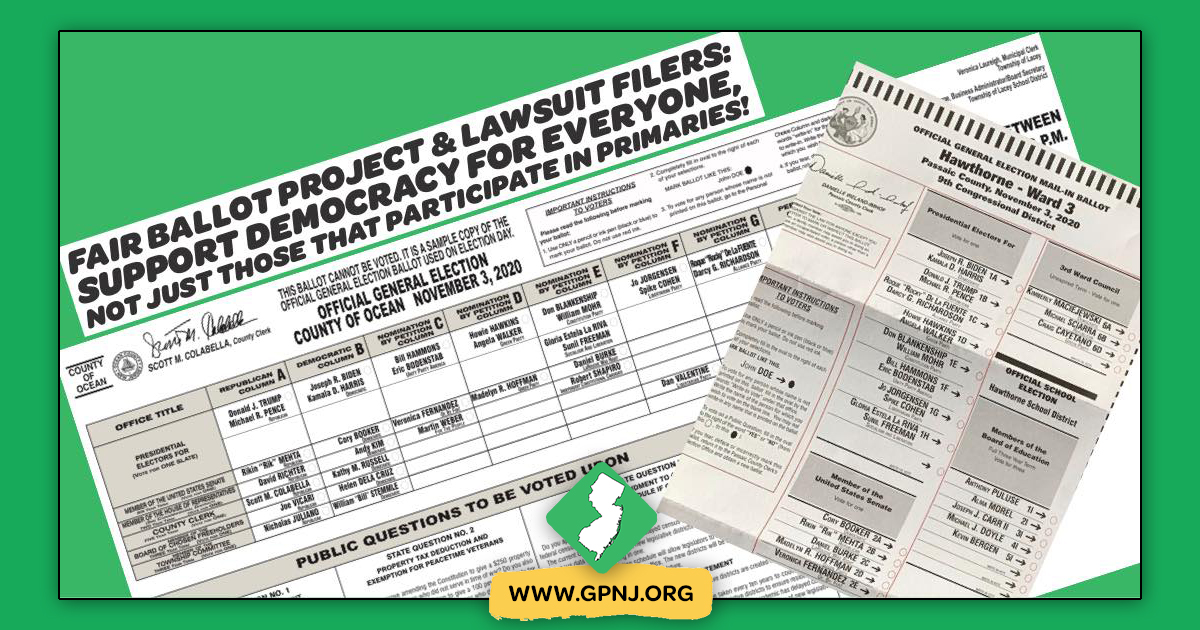 The Green Party of New Jersey (GPNJ) calls on the Fair Ballot Project and all coalition members to embrace general elections, too, not just primaries. GPNJ denounces this current lawsuit for chasing 'Democracy' because it promotes only the agenda of the mainstream political parties, instead of promoting democracy for all.

"The lawsuit, as filed, speaks only to the preferential treatment given party preferred candidates who run in either the Democratic Party or the Republican Party primaries," said Madelyn Hoffman, Green Party of NJ candidate for U.S. Senate in 2018 and 2020 and Communications Chair of GPNJ. "Issues of ballot design and fairness apply equally to the general election and as currently structured provide overwhelmingly preferential treatment to the Republicans and Democrats. Unfair ballot design is one of several structural reasons why independent political parties and independent candidates have so many obstacles to overcome in order to win elections in New Jersey."

This recent lawsuit that was filed and referenced here under the banner of "progressives" is only a half-step measure. It includes NJ Working Families Alliance, Christine Conforti, Arati Kreibach, Mico Lucide, Joseph Marchica, Kevin Mcmillan, Zinovia Spezakis, The Good Government Coalition New Jersey, The Fair Ballot Project and other groups. Unfortunately, the effort is short-sighted and self-serving for thinking only of the Democrats and only during the primaries. As of now, there has been no outreach or support to Republicans affected.

The information posted on the Fair Ballot Project website reads exactly like what parties other than the Democrats and Republican experience all the time with the general election ballot. There are more than 2.4 million voters whose candidates are always relegated to "Ballot Siberia," in New Jersey because they are registered as unaffiliated or independent. Certainly true democracy and a level playing field isn't easy to achieve. In fact, it's downright messy and means pushing the party bosses of both Democrats and Republicans off their pedestals. At least through a more inclusive ballot design, greater equity would be achieved, in form, if not in substance.

Since the lawsuit was announced a few op-eds have been posted throughout New Jersey but they all still miss the main point. Just as those involved in the lawsuit believe they are, at least symbolically, leveling the playing field within the Democratic Party for the primaries, so the same principles should apply to all political parties and their candidates during the general election.

Already, independent political parties lobbied successfully to have the same electronic signature gathering opportunities as the Democrats and Republicans during the 2020 elections because of restrictions imposed for in-public gatherings due to the pandemic. However, the independent candidates for U.S. Senate had to hold their own debate because media and civic organizations felt it was their right to decide what candidates the public should hear, instead of allowing the voters to decide on their preferred candidate. Notably, the independents' debate was open to all ballot qualified candidates, with both the Democratic Party and Republican Party candidates choosing to ignore their invitations.

Within this is another example of the democratic principle for which the Green Party advocates. To create a fair electoral process, all ballot-qualified candidates need to be treated in the same way, otherwise the party bosses of both the Democrats and the Republicans will continue to have the ability to unduly influence and determine what the voters see and how they respond when they vote.

Barry Bendar, Elections Chair of GPNJ stated, "Progressives and the organizations that are party to the lawsuit must, at a minimum, expand the reach of their lawsuit in order to level the playing field for all New Jersey candidates and voters and to truly open up the democratic process, from the primary elections through the general, instead of focusing so narrowly only on ballots cast during the primaries for their chosen party. Attempting to usurp the political machine that runs our state, from within that said machine, is a losing effort", noted Bendar. "As in the past, the machine always comes up with a way to get around the change. In my experience, much of what goes on within the parties is self-regulated, and thereby bypass these efforts by adjusting their own, internal rules and regulations. I've had experience with that in my own county. For real change, the playing field must be leveled outside of the stranglehold that the parties have on the primary elections, providing for a more democratic process in all our elections, as opposed to a system where the bosses' voice is heard above all others. We should all be working together for real electoral change, like the implementation of Ranked Choice Voting in every election," he finished.

We have created an online petition to be circulated throughout New Jersey for the sake of democracy entitled: To The Fair Ballot Project & Lawsuit Filers: Support Democracy For Everyone Not Just Those That Participate In Primaries!

Once more, if this "coalition" and lawsuit are rallying to "democratize" New Jersey's primaries, the same sort of effort needs to be applied to the general elections. The above mentioned 2.4 million registered voters would be grateful and more inclined to participate in more of the electoral process. Voters who are registered as Conservative Party, Green Party, Libertarian Party, Natural Law Party, Reform Party, Socialist Party, and U.S. Constitution Party must no longer be treated with less democracy than the Democrats and Republicans. Without that, the people behind this lawsuit are no different than those that are labeled the "machine" holding power over them. They are then one in the same and just as self-centered by attempting to prevent true democracy. Everyone in New Jersey is entitled to this all-important democracy, one that U.S. democracy desperately needs.