NY Greens call on Governor Cuomo to resign amid allegations 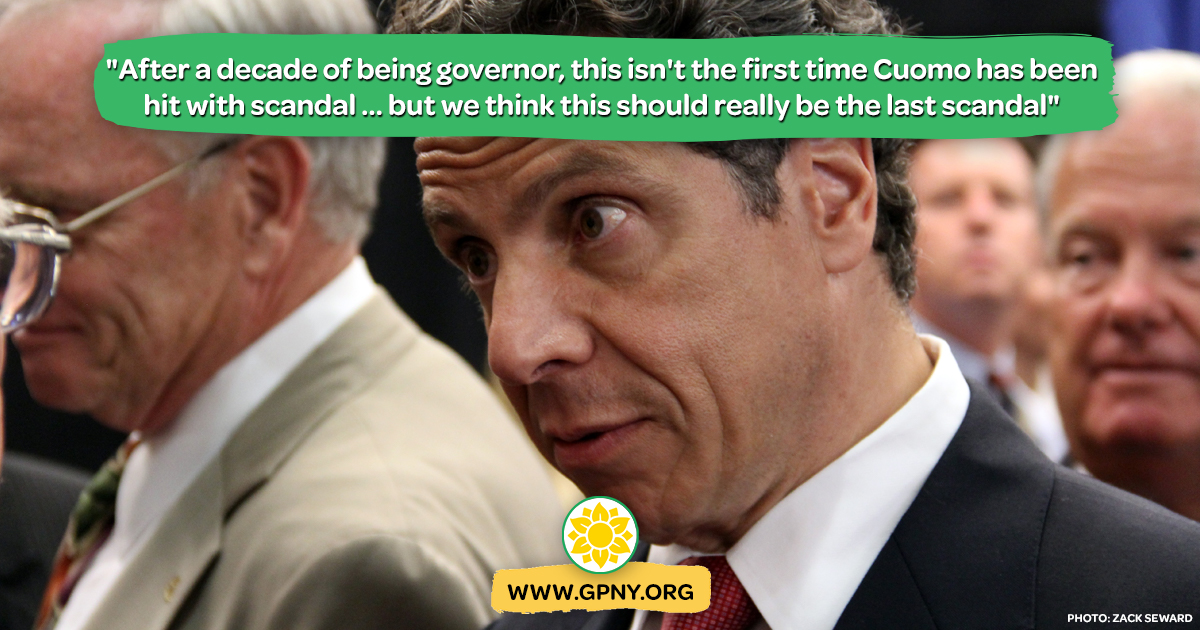 Over the past several weeks, seven people have come forward with allegations against New York Governor, Andrew Cuomo, claiming they had been either sexually assaulted, or sexually harassed by the Governor.

Subsequent calls for the Governor to resign after these allegations have come from several prominent political figures, including New York City Mayor, Bill de Blasio, US Senate Majority Leader, Chuck Schumer, and US Senator from New York, Kristen Gillibrand.

The Green Party of New York, and leader, Peter LaVenia, were some of the first political figures to publicly call for Cuomo's resignation.

Peter LaVenia spoke with Global Green News about these allegations against Cuomo, and how this scandal, along with a history of other infractions in office, are justification enough for the New York Governor to either voluntarily step down from his position, or be removed by the Legislature.

Six women and one anonymous aide have come forward with allegations of sexual assault, or sexual harassment against Governor Cuomo. Five of the victims worked as aides and assistants directly under Cuomo at the time when they were each assaulted. The list of alleged infractions includes inappropriate touching, unwanted kissing and comments about the sexual prospects of his younger aides sleeping with older men, as well as the size of his hands.

Though Cuomo has come out with a public address, stating that he apologises for making his accusers uncomfortable, he vehemently stated that he "never touched anyone inappropriately".

These actions by Cuomo have come almost two years after he had signed a bill into law providing greater protection to victims of sexual harassment in the workplace.

However, in an audio tape released to the press on Friday, March 12, Cuomo suggested that his accusers were lying, stating "I did not do what has been alleged. I won't speculate about people's possible motives".

"These are extraordinarily serious accusations," LaVenia stated, "and we take them very seriously as a party". LaVenia went on to say, "After a decade of being governor, this isn't the first time Cuomo has been hit with scandal…but we think this should really be the last scandal".

The news of Cuomo's sexual assault against his staffers came just two months after the news broke that the Cuomo administration had provided the public with false numbers when it came to nursing home deaths due to COVID-19 in the state, intentionally undercounting deaths by 50%. This is another scandal which LaVenia, and others, believe ought to provide more than enough reason for Cuomo to be impeached.

In May 2020, Cuomo had issued an executive order that nursing homes in New York State were required to accept patients who had been hospitalized for COVID-19, regardless if these patients had tested positive or negative. Up until January 2021, the Cuomo administration had told the public that around 7,000 people in nursing homes had died due to COVID-19 in the state, and that the disease had been brought in by staff and visitors, not by the sick residents. However, as LaVenia put it, "The attorney general, Letitia James, said that the Cuomo administration and Department of Health in New York had undercounted nursing home deaths due to COVID by 50%. Instead of 7,000 it was actually 15,000."

LaVenia continued, "We've come to find out that the Cuomo administration not only held back that information, but the senior aides in Cuomo's administration rewrote a report that the Department of Health had written that had contained the real numbers of about 15,000 [deaths] and they brought it down to about 7,000 to make it look better for the Governor."

Over his ten years as Governor, LaVenia pointed out that Cuomo's environmental politics have been "uniformly terrible". Cuomo has been on the side of hydrofracking, the construction of a cross-state pipeline, and the expansion of a power plant along the Hudson River.

In 2019, Cuomo signed the Climate Leadership and Community Protection Act into law, aggressively pushing a clean energy agenda in the state. While Cuomo was initially praised for passing this bill, LaVenia stated that Cuomo's motivation for signing was not for environmental protection.

"Cuomo," Lavenia stated, "who saw that the environmental winds were not blowing his way, turned and said 'we're going to ban fracking'". LaVenia continued, "When he's taken any actions, he's been forced to do so either by Greens and other environmental activists, or because he's really had no other choice."

While Cuomo has refused to resign voluntarily amid these allegations, an investigation is underway. LaVenia finished by stating that the Governor has fallen out of favour with the public, and the New York Greens will continue to push for Cuomo to be impeached.