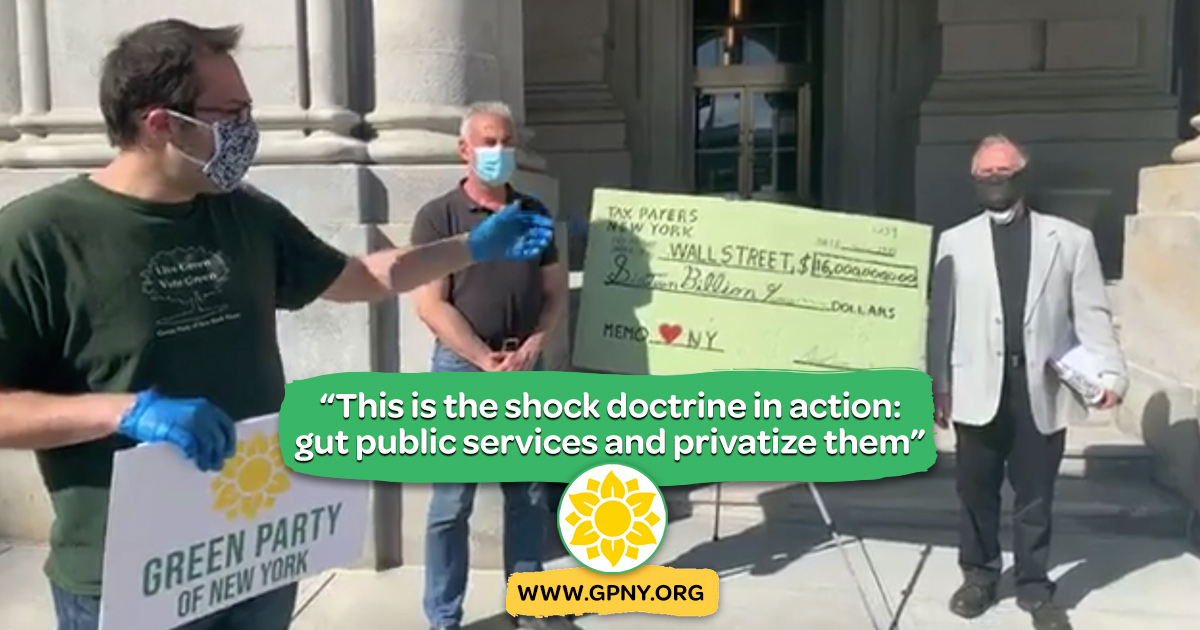 ALBANY, NY – Green Party of New York candidates Robert Alft (SD-46) and Steve Greenfield (CD-19), held a press conference in Albany today to present Wall St. with a check for its annual $16 billion in rebates from New York's stock transfer tax. The candidates argued that it was unconscionable for the state to leave $16 billion in potential revenue on the table when the budget shortfall of $13.3 billion could be entirely covered if New York started collecting what amounted to small sales tax on stock trades that has been on the books since 1909. Alft and Greenfield argued the state should rip up that check, collect the Stock Transfer Tax, and stop the savage austerity cuts that are looming.

Posted by Upper Hudson Green Party on Thursday, May 14, 2020

"Today we present Wall St. with a check for the $16 billion it will reap from rebating of the Stock Transfer Tax. New York could easily cover the $8.2 billion cut in aid to localities and the rest of the $13.3 billion gap in revenue this year. A small sales tax on Wall St., rebated since the Carey administration, would solve our immediate revenue problems. We've already seen the beginning of massive layoffs in local schools and government - what are Cuomo and the Legislature waiting for? Mike Bloomberg, who's hardly a radical, made a financial transactions tax part of his campaign, and he argued it would help address wealth inequality. It's long past time to collect the $16 billion," said Robert Alft, Green Party candidate for State Senate District 46.

"This is the shock doctrine in action: Cuomo and the Legislature admit there's a massive deficit, but rather than taxing Wall St. or the wealthy, they use the opportunity to gut public services and privatize them. The Democratic Party's real base is Wall St. - why else would Cuomo put Bill Mulrow from the Blackstone Group and Stephen M. Cohen from MacAndrews and Forbes - private equity vulture firms - in charge of economic recovery? Cuomo and the Legislature could simply stop refunding a very modest sales tax on stock transfers and it would staunch the budgetary bleeding. They won't, so we're here for the teachers, the local government employees, the 1.5 million people that have filed for unemployment in New York since the crisis began," said Steve Greenfield, Green Party candidate for the 19th Congressional District.