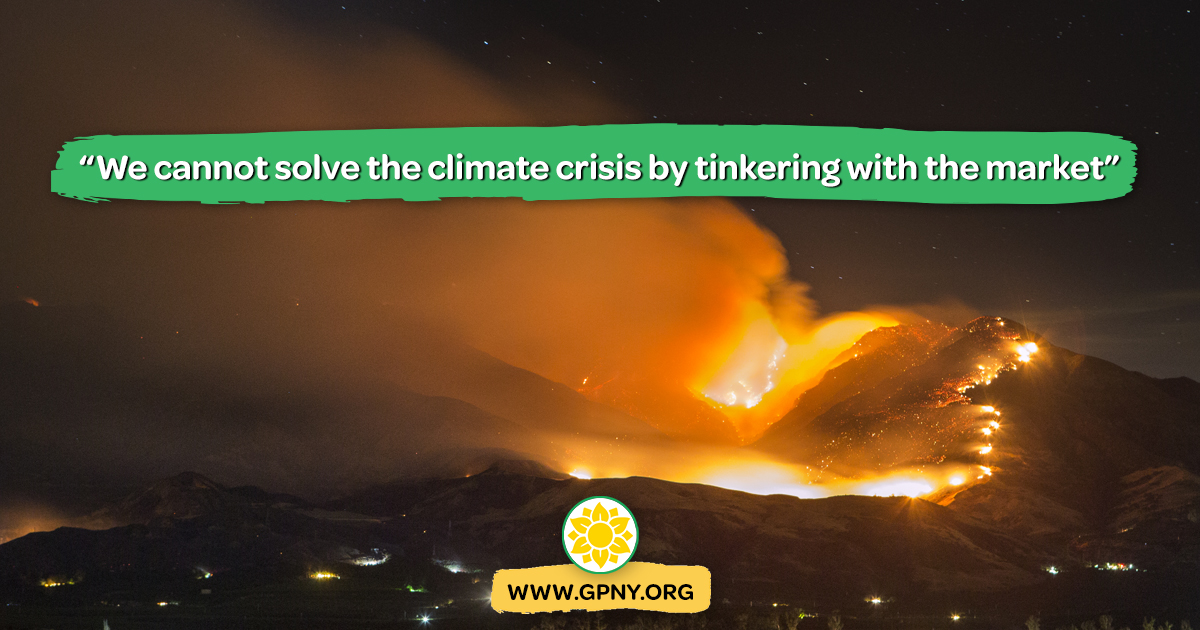 GPNY officers said the climate plan must be amended to be clear that the era of fossil fuels is over. They urged the non-governmental members on the Council to bring various issues up for a vote at the December 20 meeting, starting with a motion to halt all new fossil fuel infrastructure in the state, including any expansion of natural gas in buildings (such as NYC is planning to do). The Council should also vote to end subsidies to fossil fuels, which would include holding fossil fuel companies financially responsible for the damages they cause. The Climate Action Council should enact statewide building codes to immediately require all new buildings to be carbon-free. GPNY also said the plan needs specific short-term timelines, activities and funding to achieve its goals.

"It is time for New York to formally declare a climate emergency, acknowledging that it poses an existential threat to the future of our state's residents. Elected officials must find the courage to stand up to the fossil fuel industry and their wealth and campaign contributions. The goals agreed to in the CLCPA need to be treated as the floor, not the ceiling. Meaningless slogans like 'net zero by 2050' are designed to protect the fossil fuel industry," said Mark Dunlea, co-chair of the Green Party of the United States EcoAction Committee and GPNY's 2018 candidate for State Comptroller.

In order to avoid climate collapse, global warming needs to be kept below 1.5 degrees C. The world will exhaust its remaining carbon budget under this goal in 7 years with its current rate of emissions. With the world governments at COP26 failing to take the needed action at its recent meeting in Glasgow, the necessity for strong state action is more critical than ever.

The Green Party and 190 other community, labor and faith groups had championed the "Off Fossil Fuels / 100% Renewable Energy by 2030" legislation that was far stronger than either the CCPA or the compromise CLCPA. Their proposal sought to enact the recommendations of the 2013 study by Cornell and Stanford professors showing how the state could transition to 100% clean renewable energy by 2030. Under their plan,

GPNY spokespeople said that the Plan should also include support for a Green New Deal, combining a rapid transition to clean renewable energy with an Economic Bill of Rights. The Party first proposed a Green New Deal in Howie Hawkins' 2010 Gubernatorial race.

GPNY officers pointed out that the state has made little progress on climate since the CLCPA was passed 2 and half years ago. Virtually no new renewable energy has yet been brought online, though contracts have been signed. Little has been done to implement the goal of ensuring that 35% of the state's new climate funds benefit disadvantaged communities, with the state failing to even specify what that language means in practice. The CLCPA EJ (environmental justice) provision was amended at the last moment to largely only apply to new climate funding, something state lawmakers have failed to provide. Advocates are calling for state lawmakers to provide an initial down payment of at least $15 billion in climate funds in next year's state budget.

"Low-income and communities of color in New York and worldwide have been the principal victims of global warming. We need to invest in those communities to stop the polluting facilities built there and to provide them with clean renewable energy. This means insulating their homes and providing clean renewable energy from wind, solar, air heat pumps, and geothermal. But climate justice also requires us to stop the rising tides, floods, heatwaves, and other extreme weather that impact most heavily in low-income communities," said party co-chair Peter LaVenia.

The plan needs stronger and faster goals for battery storage, conservation, energy efficiency, demand side management, etc. GPNY said that the Plan should include the proposal to transition the State Capitol and Empire State Plaza to 100% renewable energy in 3 years. For more than a century the state has subjected the low-income Sheridan Hollow community in Albany to pollution in order to heat and coal the Capitol and more recently the Plaza.

The Green Party said that the draft plan needed to be amended to provide a central role for public power. Groups are pushing legislation to require the New York Power Authority to take the lead in building and owning renewables in New York.

"Even the Pope and the IPCC have recognized that the failures of the capitalist system have been a driving force behind climate change. We cannot solve the climate crisis by tinkering with the market and continuing to allow the search for increased profits by hedge funds and others to drive our energy and economic system. We need an economy based on maximizing the common good," said party co-chair Gloria Mattera.

GPNY said the climate plan, with input from local governments and residents, should determine where we need to build renewable energy projects in the state and then state and municipal power systems should build and own them. The plan should overhaul NYPA to enact public oversight and local, democratic control. GPNY supports public ownership of the transmission system.

While the Green Party supports a far faster transition to zero-emission vehicles than what is supported by the CAC, it said that the main goal must be a major expansion and improvement of public transit statewide combined with strong anti-sprawl provisions, including supporting higher density zoning to reduce miles traveled. Greens called for stronger measures to reduce emissions from agriculture, starting with embracing organic and regenerative agriculture.

Groups like Extinction Rebellion have called for the convening of Citizen Assemblies to make the critical decisions on climates. Other countries have utilized Citizen Assemblies of average citizens when it has become clear that elected officials are unable to resolve critical, controversial issues partially due to worry from facing voter backlash on controversial issues.