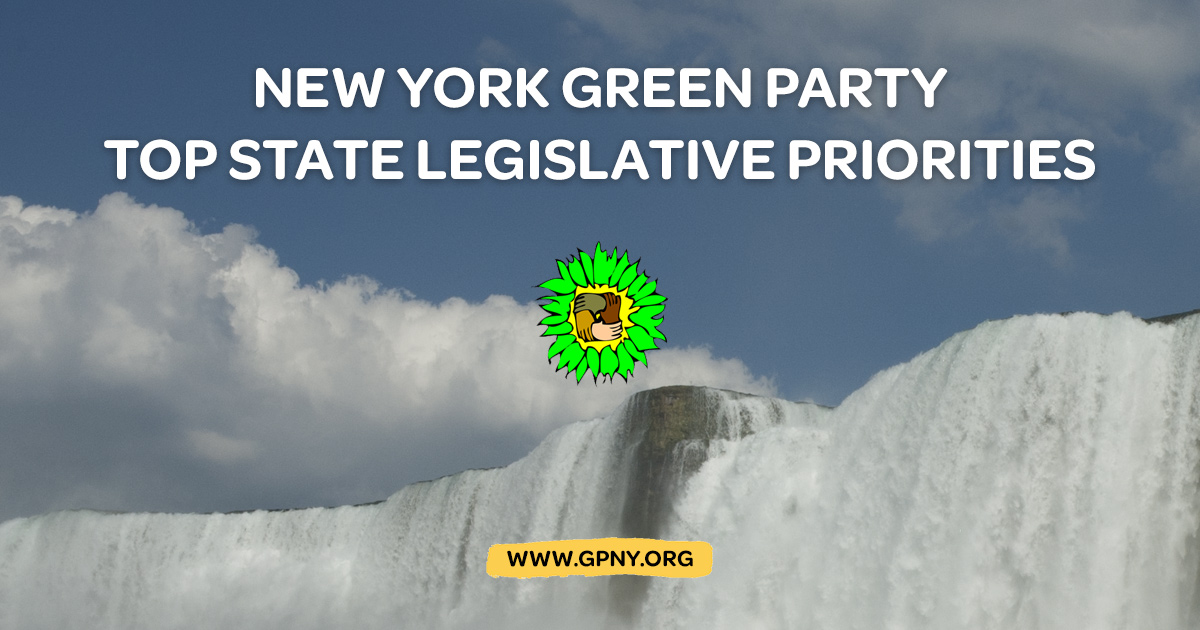 “While we have actively opposed the Republican efforts to repeal Obamacare, the ACA was an idea developed by the private insurance companies to protect their profits and market share. New York should become the first state to guarantee the right of everyone to affordable health care with no co-pays, deductibles or premiums. Studies show that a single payer system that covers everyone would lower overall health care costs by $45 billion in the first year alone,” said Gloria Mattera, state party co-chair and a board member of the NYC Physicians for a National Health Program.

The State Assembly has passed NY Health, a single payer bill, the last two years but it has been blocked in the State Senate despite being sponsored by almost half of the Senators. Governor Cuomo recently announced his support for single payer health care.

The Green Party was one of the lead organizers of the effort to curtail the use of plastic bags in NYC retail outlets but the City law that was adopted was blocked by the Governor and State Legislature. The Governor appointed a Task Force that is supposed to make recommendations for action on plastic bags by the end of the year but has failed to hold any hearings or public meetings.

Earlier this year the Green Party adopted a position to “Enact an immediate statewide ban on plastic carryout bags.”

Mark Dunlea, who helped pass the NYC plastic bag law, remarked that “we tried to craft a law that addressed the needs of low-income New Yorkers and small bodegas and supermarkets. That was apparently too complicated for state lawmakers. So let’s keep it simple and just ban plastic bags, including when the plastic industry increases the thickness of bags so they qualify as re-usable.” Dunlea added that the state should impose a small fee on any carryout bags to discourage just replacing plastic bags with paper, which also have environmental problems. The fee should be used to pay for solid waste and recycling programs.

The Greens have long advocated a Green New Deal to halt all new investments in fossil fuels and to transition to 100% clean, renewable energy by 2030. They have faulted Gov. Cuomo for continuing to promote the burning of fracked gas across the state, including his proposal to add two new gas turbines in Arbor Hill to heat the Empire State Plaza. The Greens support having the state commit to 40% of the state’s energy coming from offshore wind, and helped convinced the State to do a study of how fast it is possible to move to 100% clean, renewable energy. The Greens have strongly opposed the Governor’s $7.6 billion bailout of several upstate old nuclear plants; the bailout is greater that the state’s funding for renewable energy.

The Greens have urged for years that the State Comptroller divest the state pension funds from fossil fuel companies. They also want the state to end its annual $1.5 billion tax subsidy of fossil fuels.

“The devastation we have seen in the last month not only from massive hurricanes but from record heat waves and wildfires should be a wake-up call for elected officials. We need a similar mobilization to what we did after Pearl Harbor. We need to say no to all fossil fuels and yes to wind, solar, geothermal and energy efficiency. We need the state to promote public and community ownership and democratic control of our energy systems. We need to promote a Just Transition that addresses workers and vulnerable communities, and ensures that low-income New Yorkers can participate in our energy future,” said Peter LaVenia, state party Co-Chair.

The Greens said that New York should require all vehicles to be carbon free within the next ten to fifteen years while improving and expanding the mass transit system statewide, starting with adequately funding the capital and maintenance needs of the MTA. The MTA’s Capitol Plan calls for $105 billion over 20 years for capital improvements - though transit advocates estimate the system could use an additional $12 billion annually. The Party has described the MTA’s annual payments for its $35 billion debt as an ATM machine for Wall Street. The Party said there needs to be an overall master plan for mass transit in the state to detail the funding needs to create and maintain a world class transit system throughout the state.

The Green Party supports using the existing Stock Transfer Tax to provide funds for mass transit and climate action rather than rebating $15 billion plus annually to Wall Street speculators. It supports a wealth tax and congestion pricing, the dueling proposals from the Mayor and Governor. Both the state and federal government need to significantly increase its funding for mass transit. The Party also supports a carbon tax to require polluters to pay for the damage they cause by burning fossil fuels; part of the proceeds would go to mass transit. It is estimated that at least 3,000 New Yorkers die prematurely from air pollution and that $30 billion in additional health care and economic costs are incurred. The Governor in December 2015 announced support for a regional tax on gas to pay for mass transit but has failed to take any further steps.

The Green Party will hold its statewide convention in May to nominate candidates for Governor, Lt. Governor, US Senate, Attorney General and Comptroller. It will also field candidates for the state legislature.