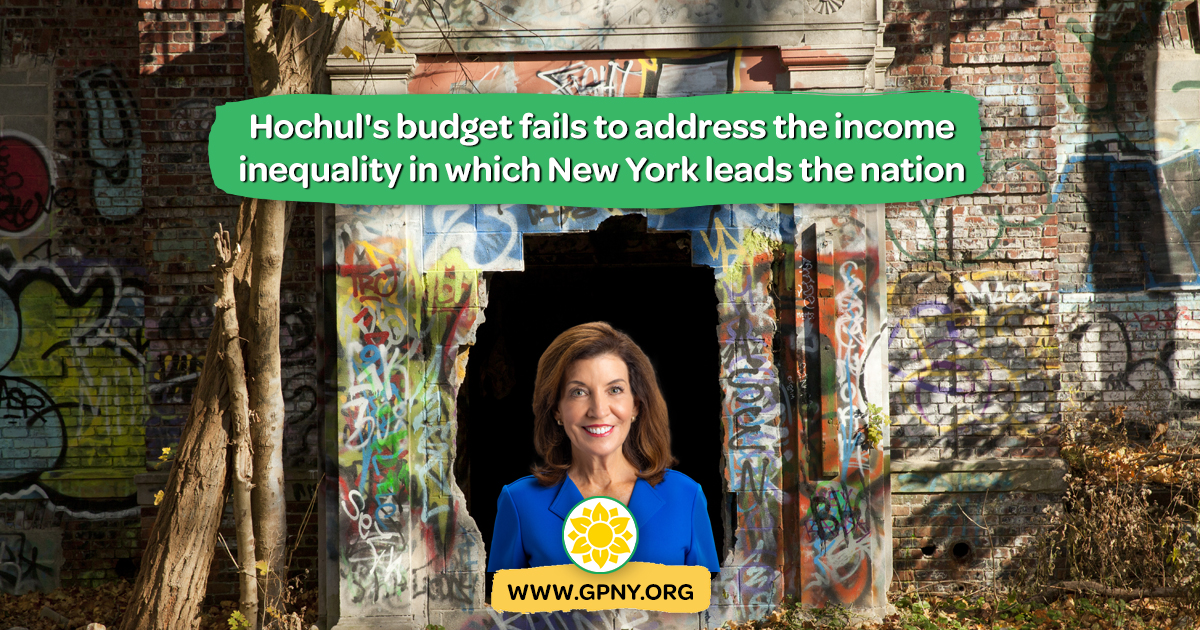 ALBANY, NY – 1/18/22 - Green Party of New York leaders today said that Gov. Hochul's proposed $216.3 billion FY 2022-23 executive budget falls far short of what is needed. The Greens stated that Hochul continued the failed budget priorities of ex-Gov. Cuomo, and that her proposed budget would enrich the 1% and campaign donors rather than working class New Yorkers.

Green leaders said that Hochul's budget fails to raise taxes on the wealthy or address the income inequality in which New York leads the nation. It also fails to raise the needed funds to address catastrophic climate change, which environmental groups say amounts to at least $15 billion this year, does not end subsidies to fossil fuel companies, nor does it enact a carbon tax on polluters. Hochul's budget does not include single-payer universal healthcare, which would make healthcare a right and slash taxes and payments on healthcare. It also does not expand the bottle bill on its 40th anniversary, and it makes an inadequate investment in affordable housing.

"Gov. Hochul's budget is, unfortunately, more of the same in a state hungry for change. Her budget does little in addressing massive income inequality in New York, which leads the nation in that sobering statistic. There are no new tax increases on the wealthy proposed or a financial transactions tax on Wall St. Instead, Hochul proposes a tax cut. Given the surplus this is the time to seriously begin to address increases in social welfare, benefits, and income transfers necessary to decrease inequality," said Gloria Mattera, state party co-chair.

"We are in the middle of a catastrophic climate crisis and Gov. Hochul's budget does almost nothing that environmental groups say is necessary to deal with it. Rather than adequately funding climate change programs - at least $15 billion - Hochul touts $400 million to be added to the Environmental Protection Fund. The budget does not call for an end to new gas infrastructure. There is no carbon tax on polluters. She did not even call for expanding the bottle bill to increase recycling. Gov. Hochul is again fiddling while the planet burns," said Mattera.

"Gov. Hochul joins the long line of New York governors that refuse to address single-payer universal healthcare by placing it in her budget. The pandemic has shown us what single-payer universal care could look like: efficient provision of services used by the entire state population increasing health and public safety. Single-payer would cut taxes and payments for the vast majority of New Yorkers, especially local governments whose budgets are dominated by Medicaid and other healthcare costs. It's long past time for New York to pass the New York Health Act, and with lead sponsor Assem. Richard Gottfried's retirement this year, Gov. Hochul had the chance to do just that. Unfortunately Hochul is far more interested in pleasing her campaign donors than helping working New Yorkers," said Peter LaVenia, state party co-chair.