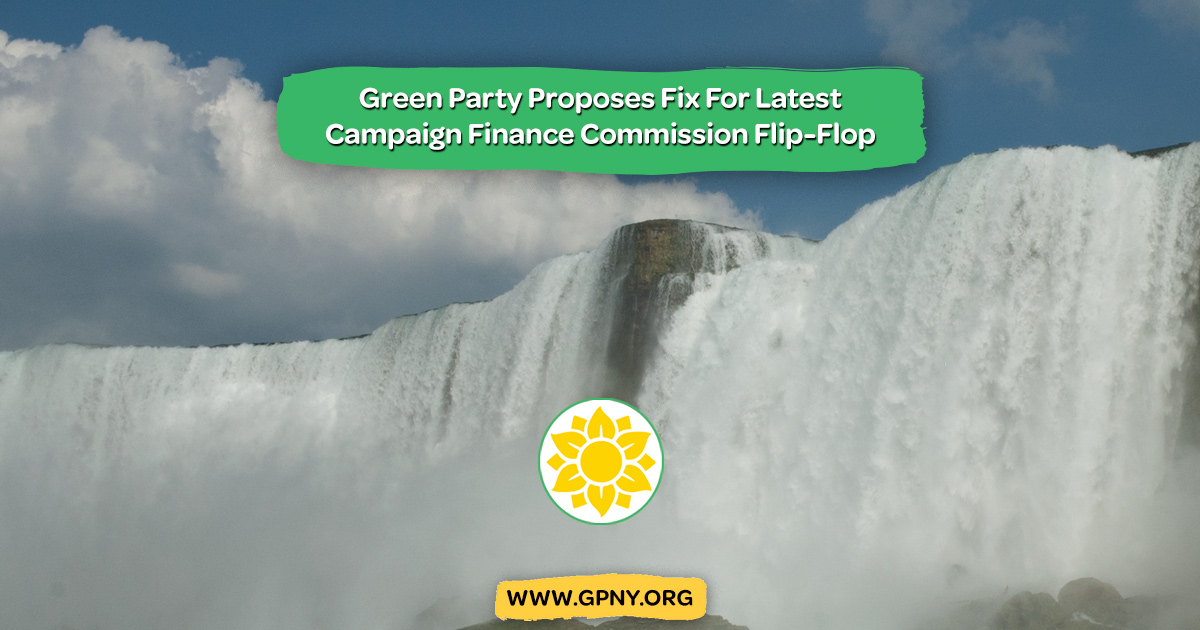 The party instead proposed the Commission enact the "Clean Money, Clean Elections" grants-based system that exists in Arizona and Maine. Party leaders said the system was easier and fairer, and would solve the debate over in-district or out-of-district matches.

URL to this release:
http://www.gpny.org/green_party_proposes_fix_for_latest_campaign_finance_commission_flip_flop

"While Commissioners squabble and reverse themselves suddenly on a matching funds proposal, we believe there is a better, simpler way to enact public campaign financing in New York. This method is the only one that has been consistently proven to meet the goal of increasing competitiveness of elections, limiting the influence of private monies, and creating a more level playing field for all parties and candidates: Arizona and Maine’s “Clean Money, Clean Elections” grants-based systems of full public campaign financing. Candidates that opt-in to the program also choose to forgo private donations, except for a small number of private $5 in-district qualifying contributions. Candidates that raise the requisite number of qualifying contributions are given a competitive lump-sum grant to run their campaign, and the amount of cash they can receive from their own party is limited to prevent soft money from replacing private donations," said party co-chair Peter LaVenia.

"The Commission's waffling isn't about how to limit the influence of private money, but the level of magnitude private donations will have. The matching funds plan would amplify the dominance of wealthy and private donors, and do little to increase electoral competitiveness. That is why we recommend the Commission reject matching funds in favor of full public campaign funding via grants," concluded party co-chair Gloria Mattera.